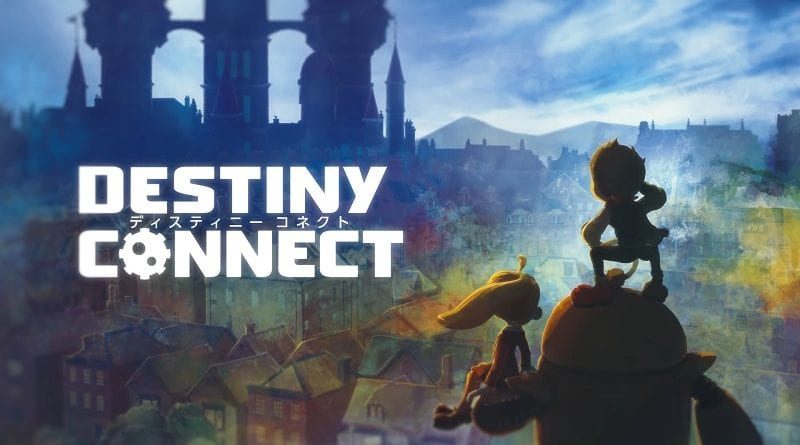 The Fall season is always busy for video games but 2019 is especially so, even for niche JRPG titles. With titles like Trails of Cold Steel 3 and Atelier Ryza, it can be incredibly easy to overlook a small little game like Destiny Connect: Tick-Tock Travelers, but you really shouldn’t.

Destiny Connect is an adorable JRPG that’s filled with fun characters, classic style, and lots and lots of cute robots. You play as a young girl named Sherry who lives in the town of Clocknee.

As the town celebrates the turn of 1999 into 2000, all the residents of the town suddenly freeze and hostile machines appear.

As you might have guessed from the second part of the title, Destiny Connect’s main conceit is time travel. Most of your time is spent in the town of Clocknee, but you get to see it in different time periods.

In terms of structure, Destiny Connect is a pretty standard JRPG. You move through the town heading toward different objectives, and engage in classic turn-based battles along the way. But it’s, perhaps, the classic feeling of the game that I’m enjoying the most.

There’s something immediately charming about Clocknee and the main cast of characters. Sherry is an innocent young girl with a fiery spirit, juxtaposed by her timid best friend Pegreo.

Near the beginning, Sherry meets the other major character of the game, a ridiculously rotund robot named Isaac, designed by Sherry’s father.

While Sherry and the other character level up and learn skills in a traditional manner, Isaac need gears that you craft in order to learn new skills and boosts.

While combat doesn’t do anything to break the mold, it’s a pretty solid turn-based system. Each character has their own unique skillset that fits a “role,” like Pegreo’s ability to cause damage to all enemies and hit them with status effects, or Isaac’s focus on soaking up damage and enhancing defense.

The game does a good job of mixing up enemy variety, and each enemy type in the game is a fun little twist on appliances come to life, like a walking television or a sentient refrigerator that hits you with ice attacks. Good stuff all around.

While the writing and characters are charming, even more, attractive is the game’s art style. It’s certainly not the most graphically impressive game out there, but the art style reminds me of 90s Pixar, but of course a more advanced version of it.

It’s honestly hard for me to put my finger on why, but the art style almost evokes a sense of nostalgia for me, in some way.

Destiny Connect certainly isn’t going to redefine the JRPG genre, but the period it was released in means it didn’t even get the attention it deserved.

It released the same week as the powerhouse titles Modern Warfare and The Outer Worlds, which is bad enough. Even worse, though, is the fact that it released on the very same day as another NIS America title, Trails of Cold Steel 3.

In terms of niche JRPGs, as series like Cold Steel simply has more recognition and interest than Destiny Connect. It’s baffling that both of these games would release on the same day, and guarantees that at least some players who would try Destiny Connect out, end up skipping it.

In a year packed with ambitious new experiences, Destiny Connect was like a delightful piece of comfort food for me; a favorite meal that you always go back to.

Everything about it appeals to that “classic” JRPG feel, and its characters and world are just so damn charming. I haven’t completed it yet, but I’m happy to put a few hours in here and there, when I can on my Switch.