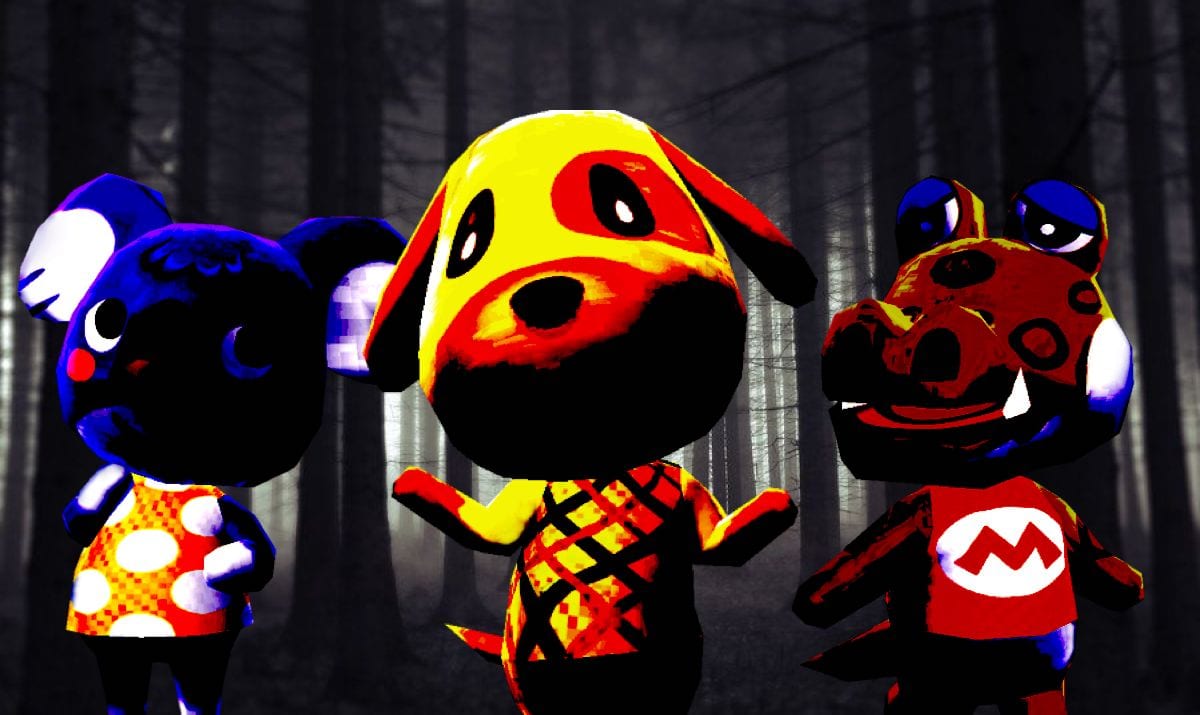 A spotlight appears before me.

It’s blinding, intense – as if I haven’t seen any light in months. Standing under it, bobbing merrily to and fro, is Freckles the duck. Her vacant stare is troubling, but she seems to be in high spirits. She still hasn’t fixed her damned hairstyle, but that’s neither here nor there.

She asks me if I’m ready to hit the town, and when I warily reply in the affirmative, she has the audacity to ask me who I am.

Dammit, Freckles, I gave you so many gifts, wrote you so many letters. I returned your lost handkerchieves and fetched you fruits and wildlife from around the globe. Now, you can’t even remember who I am?

Maybe I’m the only human who ever resided in this godforsaken village, maybe I’m your God?

Then, before I know it, I’m lumbering out the front door from my palatial estate, looking bewildered and brandishing an axe for reasons I can’t quite fathom. My letterbox is crammed with mail, and a rancid odor wafts from inside the house.

My Gyroid doorman flails about wildly, as if he’s just seen a ghost. I press him for answers, a clue… anything to clear the fog in my head. But he simply greets me as he always had, inquiring if I’d like to save. Save who, Gyroid? Who needs saving?

He refuses to budge, both figuratively and literally.

I trepidatiously walk back into my house, thinking it wise to retrace my steps. I’m met by an army of cockroaches, and the static noise from a television that has been running for far longer than it should. My electricity bill is going to be astronomical, but for now, there’s an infestation that needs to be dealt with.

I frantically barrel about my living room, crushing the pests underfoot, before searching for more of them hidden underneath my furniture. They seem to be unending, but fortunately they are easily disposed of by simply sliding the heavy chest of drawers back into place.

In a village of animals, why is the genocide of these harmless insects considered acceptable? It’s a troubling notion, Orwellian, even.

No more movements in the darkness, I must have eradicated them all. I retire to the basement, thinking it likely that I’d find a nest, or perhaps… a body.

Nothing but my Gyroid collection, and a smattering of NES titles. Would playing Balloon Fight help to ease my frayed nerves? Or do I need a Nintendo online subscription for that now?

I decide against it, quickly ascending the stairs before the Gyroids notice my presence and demand that I appease them with music and frivolity. There’s a reason I condemned them to the basement, after all.

Back out the front door, axe in hand. The cool autumn breeze would normally be calming, but it carries a telltale whisper that chills me to the core. I thumb through the letters I’ve received, most of them from my mother. She would send one every time she had a stray thought, zero regards for the environment or the busy schedule of her beleaguered son.

Junk from the Happy Room Academy, who continues to gush over the fully reconstructed tyrannosaurus skeleton posing in my kitchen area. A farewell letter from Amelia, which would be helpful if she had actually elected to date it instead of just loading it with passive-aggressive jabs and sickening humblebrags.

I finally choose to venture out further, heading eastward and tiptoeing through the weeds that choke the ground with every step.

…This isn’t my Überg! The envy of nearby townships. Jewel of the southern front. A place the fashionista Gracie has driven through no less than twenty-six times, and surely that’s no coincidence?

It’s getting too much to bear, but then, I spot her. Goldie, my sweet-natured canine neighbor. Surely she’ll shed some light on the madness that’s going on. I wisely opt to put my axe away so as not to frighten her, though the outline is probably still visible from inside my pocket. One false move, and I’ll never sire a child.

Goldie’s eyes squint as they land upon me. It’s quickly apparent that she can’t quite place my face, but she’s just as polite as ever, dealing with me as if I’m a wayward stranger who needs help, before it finally dawns on her.

I search my mind for a response, but I’m not entirely sure myself. Had I been holed up in that house for all those years? Or was I hopping from village to village, making new friends and accruing even greater debts?

“I became the mayor of a three-dimensional town and replaced you with a more marketable doggy!” I blurt out nervously, hoping to lighten the mood, but it falls on deaf ears. Now, Goldie has steered the conversation towards a completely new subject, some nonsense about a popularity contest.

She never was that bright.

However, it’s much the same no matter who I talk to. They look shocked at first when I approach them, and all seem to know exactly how long I’ve been away — as if they’ve been marking it on their calendars — but afterwards, they return to their usual topics of discussion.

Alfonso expresses his desire for a tasty snack. Costeau boasts about his latest athletic triumph. Limberg calls me a douche. I really wish I had never taught him that phrase.

Is that truly all there is to it? I was gone, and now I’m back, no further questions asked? What about all of the errands I had begun in earnest, without having ever completed?

What of the flowers and trees I had planted in an attempt to beautify the town? Why had nobody bothered to pluck any of the weeds? Or donate to the museum? Or cover up the holes I had dug out the front of Freckles’ house as a cruel prank?

The more I think about it, the more I begin to realize exactly how vapid these animals are, and that I hadn’t really missed them in the first place.

It makes me want to disappear all over again, maybe steal away to Booty Island, the offshore paradise I had once invaded and haphazardly named after my fondness of butts.

My mind then returns to the mailbox, and a crumpled letter from the resident shyster Tom Nook, promising peace and tranquility in the form of some kind of Getaway Package…