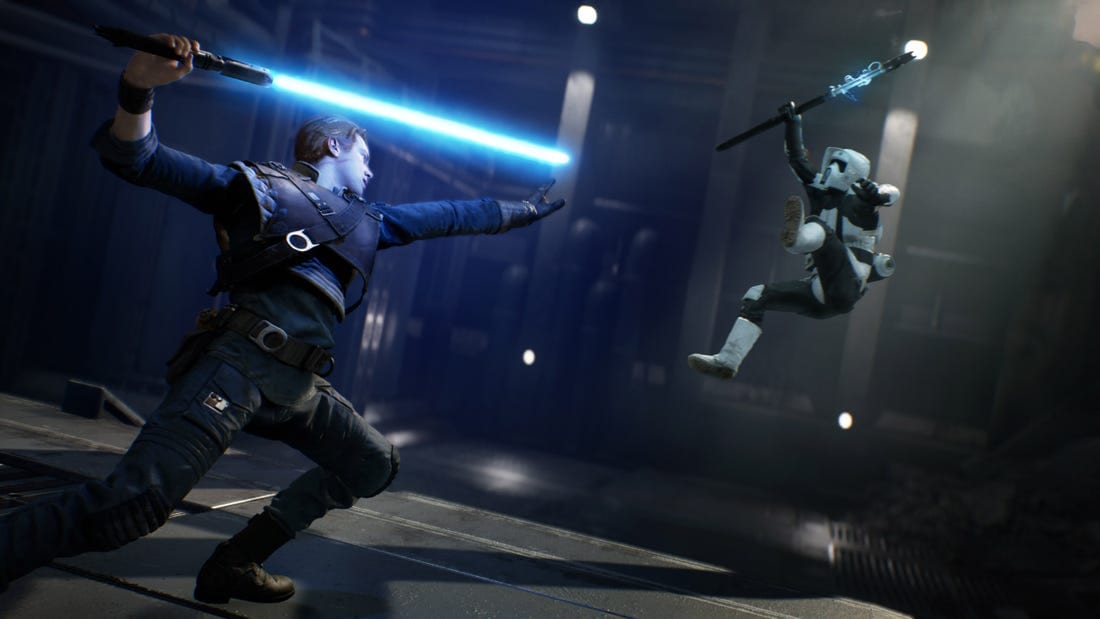 Throwing Your Lightsaber & Calling It Back

Star Wars has always been about the use of the Force… and flashy, fancy lightsaber battles. Well, Star Wars Jedi: Fallen Order has both of these in droves, with plenty of abilities and skills Cal can learn to enhance his combat abilities with his trusty Jedi tool.

One of our personal favorites was the ability to throw your lightsaber ahead of Cal before calling it back with the Force and having it return to his hand. It deals damage both on the way out and on the return trip to any enemy it hits, and generally can look pretty bad-ass if you combo it with a Force Push or Pull or an overhead strike with your saber once it’s returned.

You’ll need to wait until later in Fallen Order to unlock this ability, but once you do, you’ll feel like the all-powerful Jedi you’ve always dreamt of being.

No Jedi is complete without their very own, personal, customized lightsaber, and you can bet your bottom dollar that Respawn Entertainment included this as a feature for players to mess around.

By searching the tons of chests scattered across Fallen Order’s different planets, you can unlock cosmetic customization options, including emitters, switches, sleeves and materials for your lightsaber.

You can then return to the workbench at the back of the Mantis (your ship), or find one on any of the planets to make use of these new parts.

You will get more color options, but not until late in the story, so you’ll have to sit tight until you can embrace your inner Mace Windu with a purple saber.

It’s not just the lightsaber and use of Force in combat that Fallen Order’s nailed, but how agile Jedi can be when traversing the terrain. The game mixes the tactical combat of Dark Souls with the action-adventure platforming of the Tomb Raider or Uncharted series. Of course, being a Jedi, Cal’s far more capable of pulling off some pretty impressive moves.

You’ll be zig-zagging through the air, wall-running on parallel walls before doing a Jedi leap, Force Pulling a rope towards you, swinging over a giant gap, only to slice through a Stormtrooper on your descent to the enemy-infested platform below.

It’s all quite death-defying stuff and ensures that it’s not just the game’s combat that delivers some adrenaline-pumping moments.

Force Push Enemies Off the Edge

There’s quite literally nothing more satisfying than watching a pesky enemy plummet to their death thanks to your help. A quick Force Push behind an unsuspecting enemy will send them flying over the edge of whatever cliff or ledge they were standing by.

Even better is when you upgrade your Force Push so you can send groups of enemies hurtling backwards with one trusty raise of your hand. Plus, you’ll get all the experience for defeating the enemy/ enemies, without any of the risk of taking damage yourself.

Mainly, though, it’s just that feeling of not even touching an enemy and still sending them to their death. You evil, evil Jedi, you.

I couldn’t make this list of cool things without including what essentially became my signature move by the end of Star Wars Fallen Order. Once you unlock the Force Pull ability and upgrade it a little bit, Cal will be able to pull an enemy towards him and hold them in the air in front of them, helplessly dangling mere inches from the floor, at your mercy.

If you press X/ Square while they desperately try and wriggle free from the force, Cal will thrust his lightsaber through their torso, finishing them off in one hit.

Not only can chaining this help you quickly thin out large groups of enemies, but you’ll also hear your target’s terrified screams as they backpedal and try and dig their heels in, before hurtling towards you through the air. Awesome.

Dual-Wield Lightsabers or Use the Staff Lightsaber

Just because you’ve got your single-blade lightsaber, doesn’t mean you won’t have other options later in the game. Eventually, you’ll get access to the Staff Lightsaber (read, double-bladed lightsaber) which is just seriously cool to watch Cal spin around him effortlessly.

The Staff Lightsaber is actually most effective for crowd control and will deal less damage than your single-blade saber will in a single hit, but it’s just really satisfying to use as you thin out groups of enemies with twists and twirls.

That’s not all, though. Respawn has treated fans to the ability to dual-wield lightsabers, too. This is far more effective and lethal than just using your normal or Staff Lightsaber, but you can only use it for a very limited amount of time. Still, watching the duo of neon glows spinning around Cal and cutting down enemies is incredibly satisfying all the same.