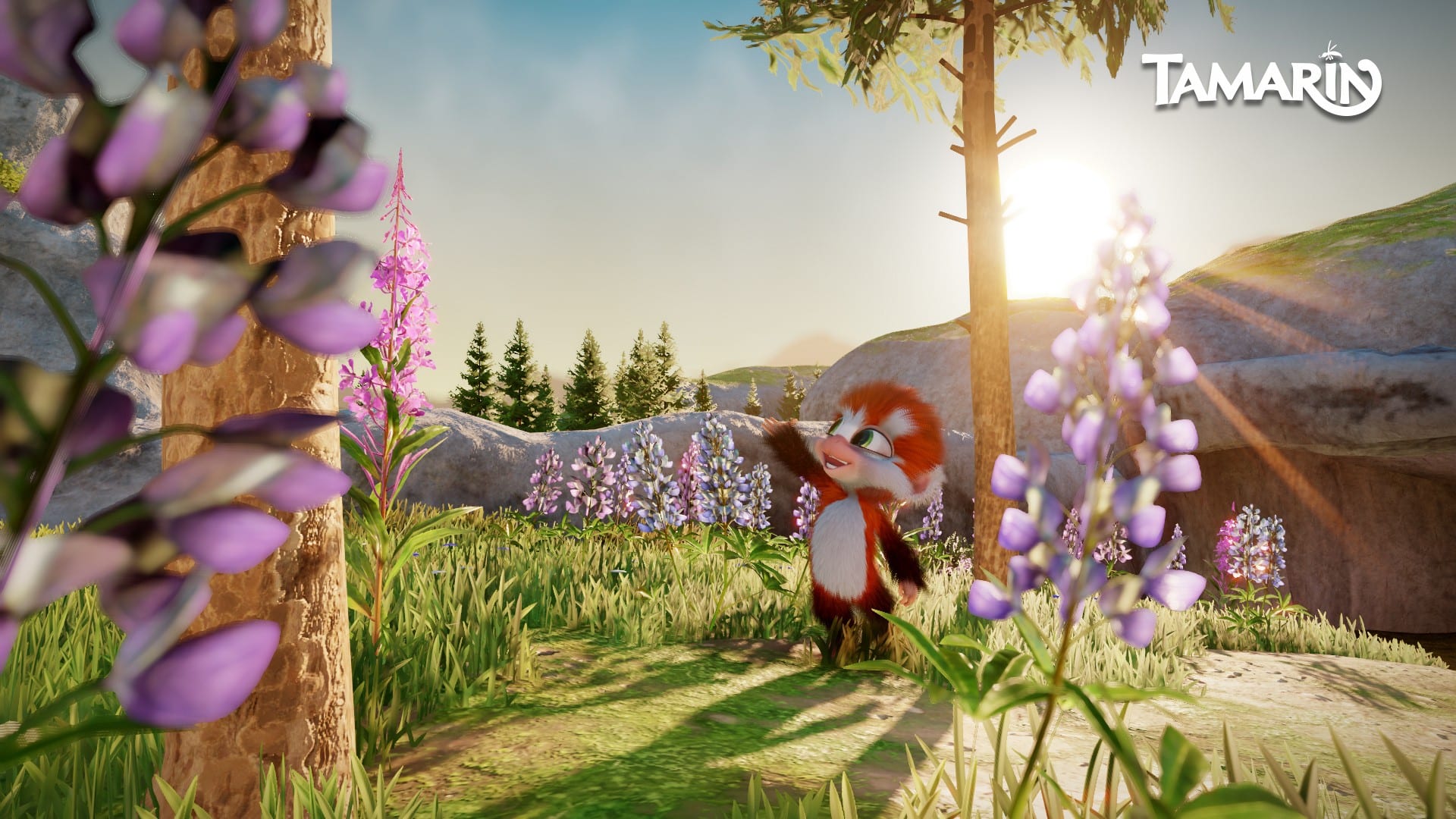 Tamarin is a cute upcoming 3D action-adventure platformer in which the titular primate ventures through beautiful yet adverse environments in order to save his family.

In anticipation of its still-vague “Q4 2019” release on PS4 and PC, we contacted development team Chameleon Games‘ studio director, Omar Sawi, to learn more about the game.

We learned a good deal from our interview, in which Sawi discussed the team’s pedigree from places such as Rare and Nintendo, the game’s themes of environmentalism and its shared history with Playtonic’s Yooka-Laylee.

You can see our full interview below:

Joseph: For those who know nothing about Tamarin, what would your elevator pitch for the game be?

Omar Sawi: Tamarin is a 3D action-adventure where you get to be a tamarin. One of the cutest animals that nobody’s heard about, it’s incredibly fun to control, because it’s very agile, especially the way a tamarin leaps.

And in the game he’s lost everything; His home and his family. And the forest around him is burnt down. So through his struggle for survival and that of his family and friends, you go through an adventure through beautiful Nordic forests, mountains and fjords.

On the way, with the help of electric fireflies, you enter underground tunnels where you get to battle intelligent insects that work in groups.

Joseph: Why did you decide to go with a Tamarin as your game’s mascot?

Omar Sawi: We wanted a very attractive animal – a superstar to match up to some of the star characters some of our designers created before like Diddy Kong and Banjo and Kazooie. Or other famous ones like Tom & Jerry or the stars in Disney animations.

Because Tamarin is a game inspired by nature, all the beautiful animals species, plants and natural locations that exist in the world, I made a list of all the cutest and most under-appreciated animals.

Tamarin won the auditions! Why? Because his fast movements were the most well suited to an action game which is about having fun exploring a 3D environment.

Joseph: A lot of the game’s marketing has centered around Rare veterans developing the game. Could you give some examples of past games developers at Chameleon Games have worked on?

Joseph: It says on your LinkedIn that you founded Chameleon Games. How did the idea for the studio and game arise, and how did you go about recruiting developers, especially from Rare?

Omar Sawi: The chameleon symbolizes play, nature, color, fun and surprise. Growing up in Norway, in the countryside, in the beautiful nature there, there was time to dream and imagine the greatest things. That dream led to a long path of 10 years of financial savings, developing and gearing up to start Chameleon Games.

Initially, I had the idea that perhaps I should join Rare, since Nintendo was Japanese, and these made what I thought were the world’s greatest games. But over time, the variety of Rare’s output from the SNES and N64 era decreased, and I went deep into why that happened, and changed my plans and got in touch with some of the best developers of Rare with my vision.

It led to the first serious effort to get them back together to make the kind of variety of games they were famous for under Nintendo. At the same time, the goal was not really nostalgia, but that spirit of variety and creativity which lead to some of the best games in the world.

Games let you do things you can’t do in real life and see and hear great things, to give you special moments and take you somewhere special, and that’s what we want to do.

Joseph: When did development for Tamarin start, and has the concept for the game changed in any dramatic ways since inception?

Omar Sawi: Tamarin in its current form started in 2013 or even earlier. The vision for it has been remarkably consistent. By then, it was already decided where you would go, what the themes were, what the main characters were.

The gameplay would have elements from Banjo Kazooie, Jet Force Gemini, Donkey Kong and Zelda. It is only because actually executing that to a great quality with today’s production standards is so difficult and resource intensive that the game has taken such a long time.

But the original vision of a game based on the beauty of nature and all the wonderful species and plants in it, I believe it’s a great vision.

Joseph: When “indie 3D action platformer developed by former Rare employees” comes to mind, the first game many would think of would be Yooka-Laylee. Did you know about that game’s development when you were starting on Tamarin, and how does this game distinguish itself from that title?

Omar Sawi: You got it the wrong way round there!

Chameleon Games and Tamarin started first. The chameleon has since we started been our symbol of nature, originality and colorfulness. Yooka is a ‘chameleon’ created by persons who were involved in Tamarin before that. One game is a spiritual successor, Tamarin is not.

Joseph: We’ve also heard a bit about how Tamarin’s message aims to draw attention to environmentalism and preservation. Why did you decide to go with this message, and how will Tamarin achieve this?

Omar Sawi: Tamarin is driven by an idealism. Life is not worth living, unless you try to do or create something beautiful. This is a world that we partially are part of forming and creating. We have a special opportunity with games to actually take people to new places and be something they can’t be in real-life.

Tamarin tries to indirectly shine a light on the fact that there are a lot of cute animals, beautiful plants and species that are very important to our life on Earth.

Many of them are just so precious that we shouldn’t afford to lose them or the beautiful places they live in. Of course we want the game to simply be fun to play. But perhaps after they’ve fallen in love with and enjoyed being a tamarin for a few hours and reunited the lovely family; perhaps then they’ll look up how cute real tamarins are?

Perhaps someone will reflect on the story of their forest being burnt down and why this is actually really happening?

Joseph: Tamarin currently doesn’t have a release date, instead just being slated for Q4 2019. Are you confident the game will launch this year?

Omar Sawi: As confident as its possible to be in games development. We want the game to be as good as possible.

Joseph: Tamarin is launching for PS4 and PC, but the site doesn’t entirely rule out Xbox One/Switch versions for the future. If Tamarin gets positive reception at launch, do you anticipate porting the game to either platform?

Omar Sawi: We are not ready to announce other platforms yet, but I can tell you that we’re looking at it.

Joseph: Is there anything I haven’t asked that you wish I had?

Omar Sawi: We hope people will enjoy the unique alternating gameplay structure, merging shooter games with platforming games and adventure. And to discover the way everything connects between different worlds so you can come back and see things from a new perspective.

It’s not a game where you see everything in the beginning, but hopefully you get some surprises along the way, such as dancing ants, and memories and poems to collect.

For some parts of the game you’re in nature and you play as a monkey freely exploring the world. In others, you’re deep down in tunnels with dancing ants, and you use tools and weapons.

So hopefully there’s something for everyone, old and young, those that prefer something like a 3D platformer, and those who like some action!