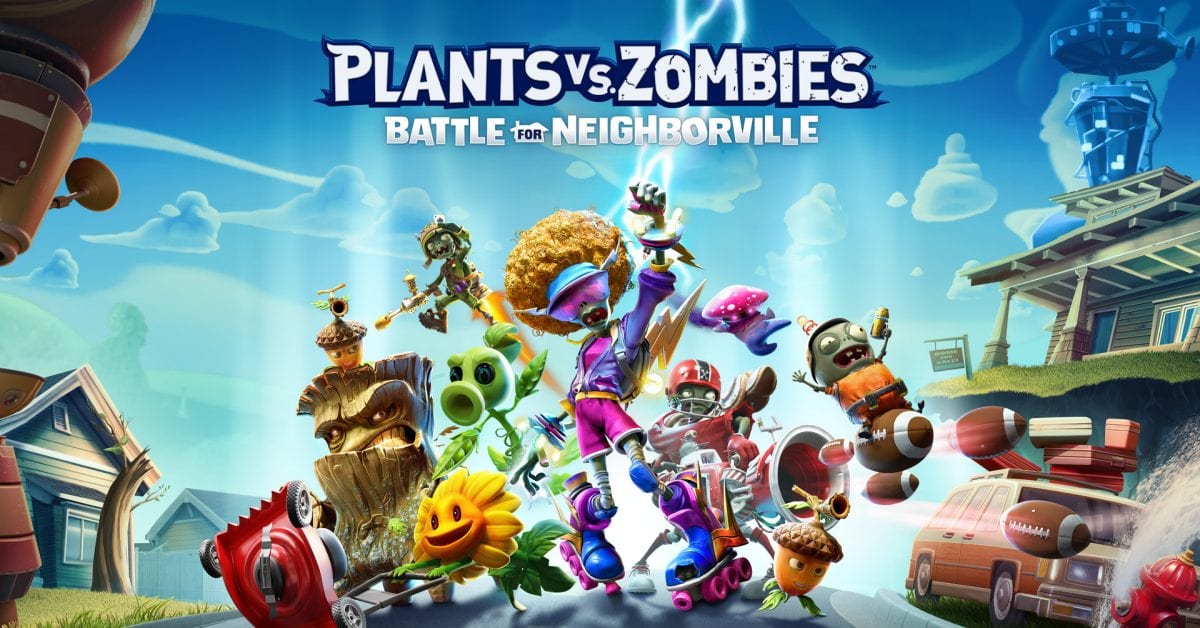 Plants vs. Zombies: Battle For Neighborville on PS4

Plants vs. Zombies has come a long way from its tower defense roots. The Garden Warfare series transformed the game from tower defense into a full-blown 3D hero shooter.

With Plants vs. Zombies: Battle for Neighborville the team at PopCap took that idea one step further and included multiple mini-campaigns, a social hub world, and a ton of playable characters on both the plants and zombies side.

The social hub area is where you will begin the game every time you log in. Both plants and zombies have their own unique area to explore. These hubs act as your jumping-off point for whatever activity you want to do.

The game’s story is divided into four miniature campaigns. Two for the Plants and two for the Zombies. Each campaign has its own fairly large map to explore. You’ll follow wacky storylines like trying to stop the zombies from filling the map with melted cheese.

The cast of characters you meet along the way are charming. Like Sergeant Peel, a high-ranking military orange who packs a punch. These characters will send you all over the map to find collectibles and complete objectives.

These objectives generally have you clearing a bunch of enemies and then fighting a boss, which can get a bit repetitive, but luckily they never overstay their welcome.

The missions never took longer than 10-15 minutes which was great for completing things at my own leisure. Even if most main missions followed the same structure of defending an area, they were short and sweet.

The combat in Battle for Neighborville feels fluid and diverse. It takes the classic third-person shooter element and dashes in some Plants vs. Zombies flair.

Each character has a normal shot and three unique abilities. The SnapDragon, for instance, can breathe fire as its normal attack. Its three other abilities are on cooldown.

These abilities add some versatility to the character, like an area of effect attack, and giant fireball and large leaping attack to help close distance.

Between all the different plants and zombies there seems to be a character to suit all different types of play styles.

The Chomper plant, can eat enemies in one bite, which is great for dealing with stronger enemies. Combining these different archetypes in Co-op can give your team an advantage.

Completing missions will grant you experience as well as coins, which can be used to try and get emotes, skins and hats out of a giant gumball machine. Experience points will level up your plants or zombies and allow you to promote them in the social hub. Promoting a character will give them two new abilities that you can equip.

Each character has a pool of points that you can use to select abilities, some only cost one point, but more potent abilities like extra damage can cost two or three.

You’re encouraged to mix and match and try new combinations. You can respec at any time for no cost as well as have multiple loadouts for each character.

Loadouts come into play more when you’re jumping into PvP. The chaos of Plants vs. Zombies is in full effect here. The game mode usually has the zombies defending a giant drill from the plants who are trying to stop the zombies from taking over.

Every character is available in PvP; ideally, your team would consist of an even distribution of support, damage dealers, and tanks. However, most of the time you just have a ton of damage dealers.

Team composition in Battle for Neighborville doesn’t seem to be the focus. While you can certainly try and balance your team, in the long run as long as your team is working together you’ll be able to put up a fight.

Battle for Neighborville seems more focused on trying to create a fun and inviting world for players to enjoy the franchise. The flair of this world radiates through and through.

In my time with the PvP, I never came across a particular character or strategy that dominated the playing field. Everything seemed to be balanced pretty fairly.

The game is so full of charm and vibrant colors that even when you’re losing a match, it’s still a spectacle to watch. Far too often games try and take themselves too seriously, while PvZ reminds us that it’s okay to sometimes just be incredibly silly.

All in all Battle For Neighborville is packed with content to explore and unlock. It is a worthy successor to the Garden Warfare series and I am excited to see where PopCap takes it in the future.

Plants vs. Zombies Battle for Neighborville is a strong foundation and PopCap seems determined to provide updates and events to give fans of the franchise a place to call home.

Should you Buy PvZ Battle For Neighborville

PvZ Battle For Neighborville is a 3D hero shooter set in the Plants vs. Zombies universe. Kids and adults alike won’t want to miss out on this wacky and charming release.

Plants vs. Zombies Battle For Neighborville is out now for PlayStation 4, Xbox One, and PC.