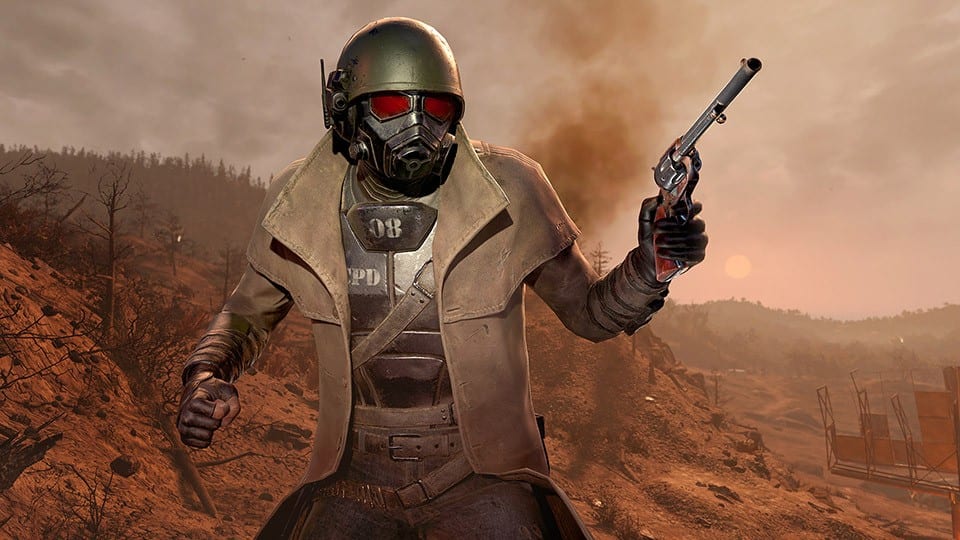 Recently, Bethesda made waves on the Internet for all the wrong reasons with its Fallout 1st membership. The company decided to implement several fan-requested features and hide them behind a subscription fee. Among the goodies offered with the membership is the NCR Ranger armor, which for me seals the deal, but not in the way Bethesda intended.

Thanks to the Ranger armor, Bethesda has convinced me to play Fallout: New Vegas instead of Fallout 76, let alone purchase a Fallout 1st membership.

To be fair, Fallout 1st offers quite a few interesting benefits, even though they require a subscription fee. Private worlds sound nice —since Fallout is best experienced without bumping into tons of other players— and an extra fast travel point via a tent looks tempting.

However, it wouldn’t matter if the membership came with a Deathclaw pet with laser rifles for hands; the NCR Ranger armor sabotages the entire sales pitch.

You might wonder why Bethesda would ever include the NCR Ranger armor in the Fallout 1st membership. The company calls the armor iconic, which is a decent explanation since they’re not wrong. The NCR Ranger armor is as recognizable as a set of T-51 Power Armor.

The NCR Ranger armor’s problem, however, stems from that iconic nature. Fallout fans love the armor for the same reason Bethesda decided to shoehorn it into Fallout 76: it is the most famous piece of equipment from the best Fallout game ever, Fallout: New Vegas.

Yet in its haste, Bethesda seems to have forgotten that Obsidian Entertainment created that game and armor and is the reason behind their legacy, not Bethesda itself.

Obsidian Entertainment has a pedigree of developing RPGs slathered in atmosphere and engrossing stories. The company developed Neverwinter Nights 2 and Star Wars: Knights of the Old Republic 2, but Fallout: New Vegas is Obsidian’s magnum opus.

The title is full of memorable characters, dialogue, and choices that launch it like a homing nuke into the hearts and minds of gamers. Take, for instance, the game’s ending.

Fallout: New Vegas culminates in a battle between the New California Republic (NCR), Caesar’s Legion, and the robots that protect the titular New Vegas strip.

The victor is determined by a web of choices players make throughout the game, and each victor’s related ending is a different shade of gray morality.

Even what many would consider the evil ending —allowing Caesar’s Legion to conquer the Mojave and enslave countless civilians— eventually results in civilization returning to the Wasteland.

Compare New Vegas’ multitude of endings to the single ending of Fallout 76, which was developed by Bethesda. You fight the Scorchbeast Queen, which is basically a giant mutant bat, and that’s it. No important decisions that can result in multiple endings; just fight a giant bat and you’re done.

The main game doesn’t fare much better. While Fallout: New Vegas is littered with side quests and quirky characters that impact the ending, Fallout 76 is a linear affair lacking in NPCs and choices that could alter the story.

Since the player has no impact on the overarching narrative (and since the narrative isn’t that good anyway), Fallout 76 doesn’t hold a candle to Fallout: New Vegas —or other Fallout games, for that matter. And yet both New Vegas and 76 include the NCR Ranger armor. Then again, only one game handles the armor correctly.

The NCR Ranger armor is essentially the mascot of Fallout: New Vegas. The outfit is plastered on the game’s box art and promotional material, and the opening cinematic features a man in the armor sniping a raider to deadly effect.

Out of the gate, Fallout: New Vegas associates the NCR Ranger armor with ruthless efficiency, stoicism, and badassitude.

As players progress through the game, they eventually unlock the ability to don the fabled suit, and the benefits are worth the wait.

The armor offers as much protection as many suits of heavy armor without weighing as much, which makes it one of the most efficient outfits in the game and solidifies its iconic nature.

In Fallout 76, gamers just buy Fallout 1st and wear the armor without any trials or tribulations. No fanfare, no hype; just shell out $13 a month to unlock the NCR’s best equipment, and you can’t even pay for it in bottle caps.

Now, if Fallout 76 were a good game, I could possibly forgive Bethesda for including the NCR Ranger armor in Fallout 1st. Heck, I might even love them for offering the armor in the membership as the armor is as fashionable as it is functional.

However, Fallout 76 isn’t a good game.

Even ignoring Fallout 76’s linear story, we point out in our review the game is a buggy mess that lacks any of the RPG trappings that make the Fallout franchise great.

Yet, Bethesda thought it was a good idea to charge players for a subscription that transforms the MMO into a tantamount single-player experience (usually it’s the other way around) and just give players the NCR Ranger armor.

If I had to choose between paying $13 a month for permission to wear the NCR Ranger armor in Fallout 76 and paying a one-time fee of $10 (less during sales) to earn the armor in Fallout: New Vegas, I would go for the latter.

Sure, can’t wear the suit out the gate in New Vegas, but the journey is far and above what Fallout 76 offers.

Better yet, instead of buying Fallout 1st, I could support Obsidian Entertainment and purchase their latest game, The Outer Worlds.

As you can tell by our review, The Outer Worlds features all the depth and RPG goodness that made Fallout: New Vegas great and is absent from Fallout 76.

Moreover, The Outer Worlds is directed by Tim Cain and Leonard Boyarsky, the creators of the Fallout franchise, which basically means the title is a more definitive Fallout experience than Fallout 76.

By including the NCR Ranger Armor in Fallout 1st, Bethesda unwittingly shined a light on their flaws and convinced me that the Fallout series is at its best when the company has no control over the franchise.

And since Fallout: New Vegas and The Outer Worlds are basically just that, I can thank Bethesda for convincing me to not spend any time or money on Fallout 76 (or Fallout 1st) and instead play Obsidian’s games.