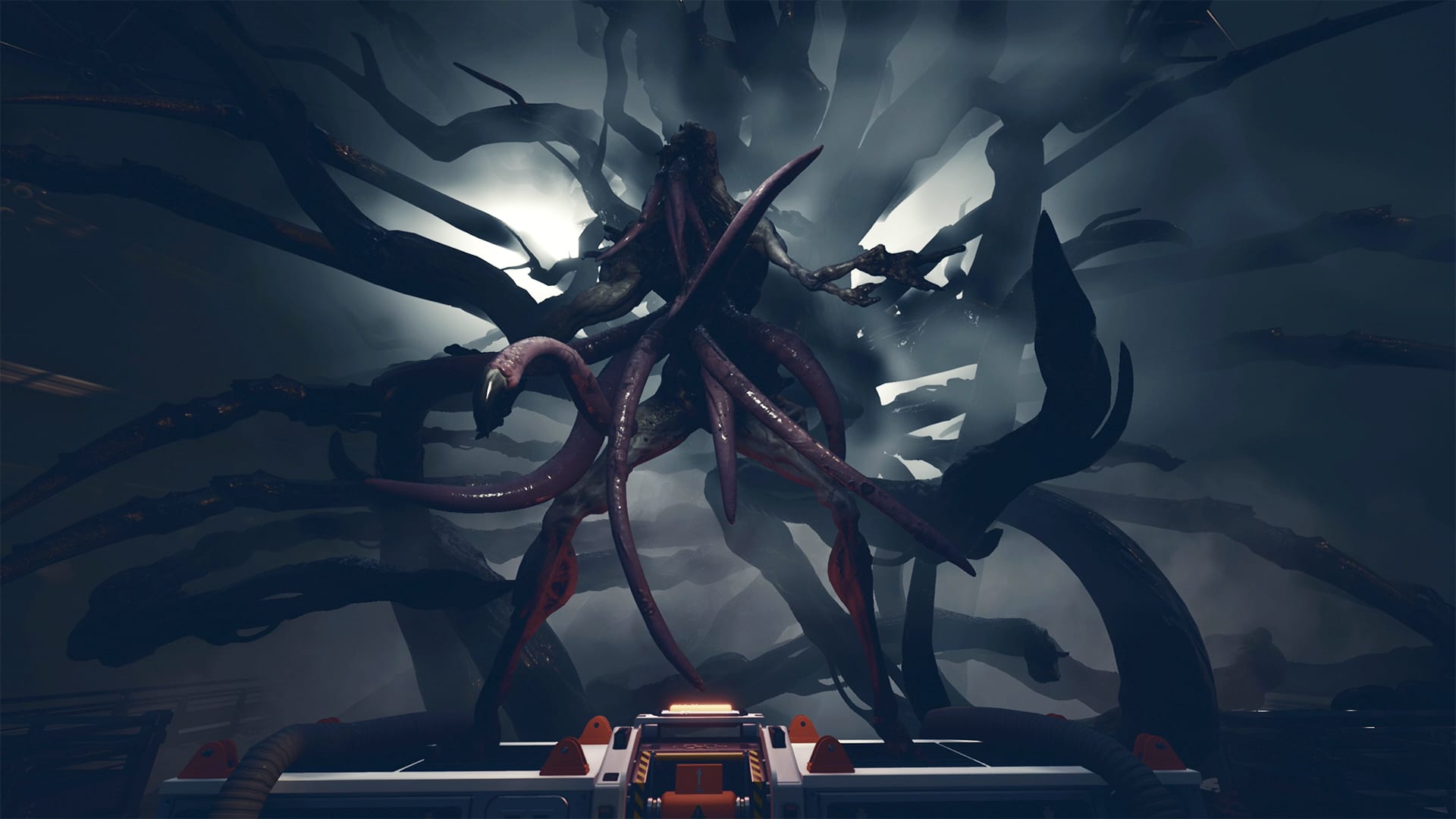 Moons of Madness on PC

Space and horror go so well together, it’s like chocolate and peanut butter. It’s an inherently scary setting, and the feeling of isolation only serves to ratchet up the tension.

Moons of Madness tells the story of a very bad day in the life of Shane Newehart, an engineer sent by the foreboding Orochi Group (think Weyland-Yutani) to assist a team of specialists as they endeavor to conduct research on Mars and generally do science stuff.

The game wears its Lovecraft inspiration on its sleeve, plain to see to anyone with even a passing familiarity with that troubled writer’s works. It’s all tentacles, eldritch monstrosities, old gods and mortals with feeble minds descending into… well, madness.

We are introduced to Shane’s everyday life during the opening sequence, complete with a scary dream that ends as soon as his alarm goes off. From there, he putters around Orochi outpost for a bit, doing odd jobs in order to familiarize the player with the mechanics of the game.

Somewhere between a walking sim and an adventure game, the moment to moment gameplay of Moons of Madness involves a lot of inspecting items, backtracking, and some light puzzle-solving.

Light in that the solutions aren’t overly complicated, but there were more puzzles than I personally would have cared for. At times it felt like padding, but they may also have been meant to serve as a temporary reprieve from the psychological assault you will be under for the majority of the game.

Once you get the hang of things, Shane ventures out of the outpost to a nearby solar array, and from here on out things start to get pretty wild.

There is an incredible sense of unease to the game, it can be felt through the environment signposting and the interactions between Shane and his friend Declan, who stays in contact with you via radio.

There is a realness to the interior of these facilities, and they really feel like lived-in spaces. Whiteboards have jokes scrawled on them, and dossiers describe the progress of the mission, and there is the general clutter and refuse that occurs when several people live in close proximity to each other for an extended period of time.

Obviously, this state of affairs can’t last in a horror game, and after encountering something otherworldly and barely escaping alive, Shane returns to the outpost and finds that things are much worse than when he had left.

“Scariness” is a tough thing to judge, due to how incredibly subjective fear can be. For what it’s worth, I was thoroughly scared on several occasions throughout the game, mostly through the use of jump scares, some of which were incredibly devious.

I found the game’s use of the environment to be the scariest aspect, like the insane words scrawled on walls, or the tentacles and corruption that seem to reach from everywhere.

I wish I could say the voice acting was as effective, but sadly it is fairly weak throughout. Shane has an annoying tendency to state the obvious and will go from measured to panicked screaming and back again in what sometimes felt like the same sentence.

The game animations deserve a special mention, as they are satisfying and well crafted. Little things like opening doors or interacting with objects have real heft, and you always see what Shane is doing with his hands, as you would expect from a first-person perspective.

While I never played it, Moons of Madness takes place in the same universe as The Secret World, the occult MMO from publisher Funcom. Fans of that game may find a few easter eggs and allusions that I was ignorant of, but rest assured you aren’t missing out by not being familiar with that world’s lore.

As the game progresses, Shane is beset by visions and hallucinations, and there are some quite surprising turns the story takes. I’ll admit that the ending kind of left me a little baffled, but there are two of them, so perhaps the other is more satisfying.

Moons of Madness is a fairly adept horror experience that kept me engaged throughout its 8-10 hour runtime. It has some genuinely spooky moments, and I was forced to play during daytime hours in one particular sequence.

It creates a sense of atmosphere that will appeal to horror fans looking for a bit of the fantastical, mixed in with a healthy dose of body-horror. It relies a little too heavily on puzzles, which I didn’t find particularly additive, and felt like filler at times.

Still, there is a lot here to recommend. Moons of Madness delivers, and like the best horror experiences doesn’t outstay its welcome, or let you become too comfortable with your surroundings.

Should You Buy Moons of Madness?

If you are a horror fan in need of a good scare, absolutely.

Who Is Moons of Madness’s Developer?

What Is Moons of Madness’s Release Date?