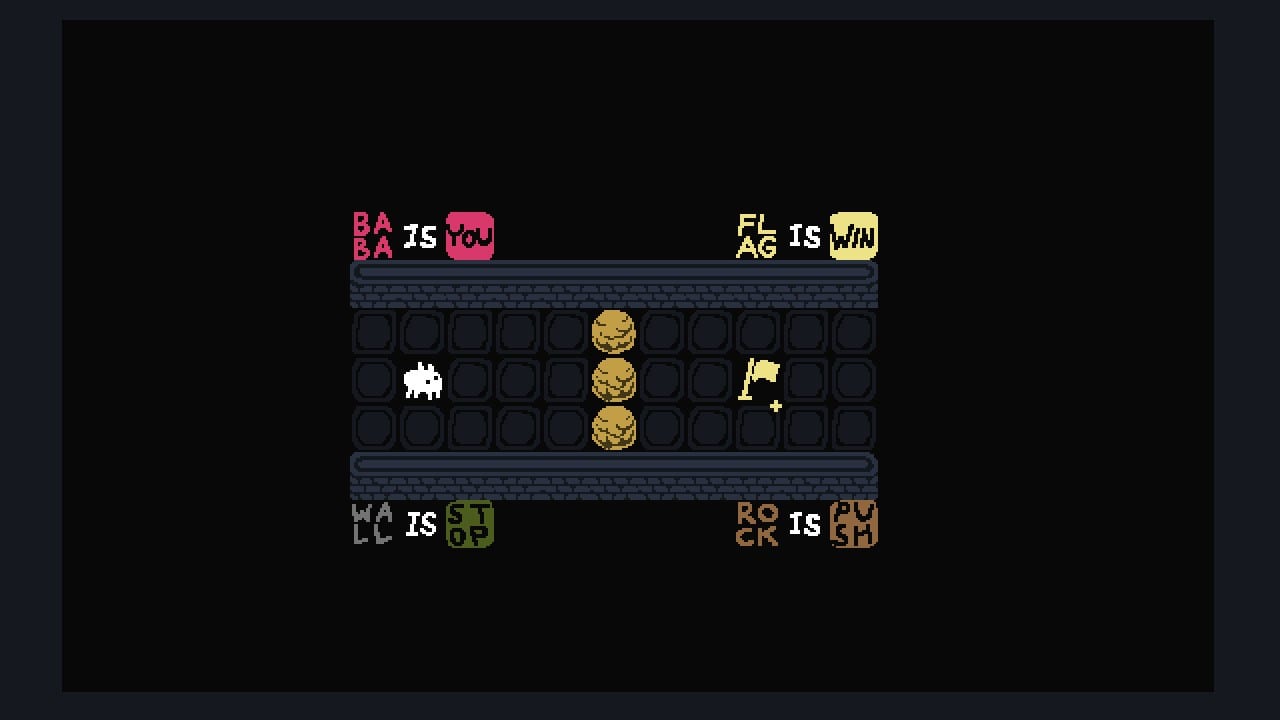 Coding is in everything we use on a daily basis, from our phones to our computers, video games, and even a coffee maker or two. It’s unavoidable and is an incredibly useful skill to master.

All video games require some kind of coding on the back end that you’ll likely never see. A developer will occasionally release the source code for their game, but that’s just about the only time we’ll see it.

On the other hand, some video games have a veneer of just being a fun time-waster when they’re truly giving you your first introduction to coding. Here are seven games that can teach you the basics of how to code.

Baba is You is one of the best puzzle games of 2019 and is a fantastic tool for teaching how to use logic and variables in coding. Each word is assigned an object or action that determines the properties of the levels.

You can push the object and property words around to change what actions the objects can perform. Even your playable character can be changed if you move an object word to the beginning of “is YOU” (e.g. DOOR is YOU).

A statement that reads “ROCK is PUSH” is pretty simple to understand, but sliding the word WIN into the spot of PUSH is a simple but effective way to show how changing variables can impact code.

The puzzles get much more difficult than that, but you can always view all of the current rules by pausing the game to get what is essentially an algorithm for the level.

Minecraft is the gift that keeps on giving to the gaming world. Not only is it the best-selling game of all time, but it’s kid-friendly and can help teach people of any age to learn basic coding.

There are numerous manuals and computer applications that are focused on learning languages like Python or Java solely through Minecraft. There are also a few more play-oriented modding guides that still teach coding.

The limits of this game are nearly nonexistent, which makes it one of the best environments in which to learn how to code. Fewer boundaries mean there’s more room for creative problem-solving.

Minecraft is also one of the special cases on this list where it wasn’t initially intended to be the bastion of coding that it is today. Like everything else that makes this game great, it was the dedicated community that initialized this.

What says kid-friendly more than a toy? Nintendo, probably. Labo hasn’t been a massive retail success, but it’s clear that the cardboard peripheral is a success as it has made its way into multiple schools around the world.

Forgetting the simple cardboard that forms the objects we all recognize, the software is incredibly underrated. It takes coding in gaming to a level that no other game has been able to match.

You can program your own routines in the Labo Garage and then have a real-world component to work with for the more hands-on learners. This also makes it a wonderful tool for teaching robotics and engineering.

The way Labo takes the basics of coding and seamlessly combines them with a real-world, physical use case is practical and absolutely unique in the world of gaming.

In The Magic Circle, you’re tasked with playtesting a game that has been in development hell for the better part of two decades. Shenanigans ensue and you find yourself exploring the sandbox world of the game.

The gameplay is focused on capturing creatures and using coding to modify their properties. There are also coding-related puzzles that help your character progress through different sections of the map.

The story of The Magic Circle focuses on the butting of heads between the two project leads, which is an intriguing dynamic that’s not commonly talked about in games.

Not only does this game teach you coding concepts, but it also explores the difficulties that game developers experience while working on a collaborative piece of interactive art.

Most of these games have a veil of a video game on top of what is a basic coding intro. Human Resource Machine just forgoes that whole song and dance all together and has you coding directly on the screen.

In this game, you need to solve a specific task for each level using the coding language provided. It’s still a very simple language to get the hang of, but it’s one of the most intricate on this list.

If you’re looking for something that will get you into the mindset of how to think while coding, then Human Resource Machine is the way to go.

The only drawback is the limitation of the tools in the game, but what you can do with this arsenal is certainly still impressive. Also, since everything is displayed on-screen, it’s a great tool for visual learners who want to code.

The Witness is one of the most divisive games on this list, but it’s an excellent tool for teaching people how to think while coding. It’s nice to be able to look up solutions on Google, but truly learning is more rewarding.

The same goes for coding. You could always consult with the internet to help you solve a problem you’re facing with your code, but using what you’ve learned from past projects feels much better.

The Witness teaches you to look closely for patterns and learn the language, with little to no instruction. Once you get the basics down, then you should be able to solve more complex problems.

Wanting to dive in head-first and immerse yourself is great, but that can cause problems. You’ll never truly understand what you’re doing until you can grasp the building blocks both in The Witness and in coding.

It may be a few more months still until Cyberpunk 2077 comes out, but to get your futuristic hacking fix, Quadrilateral Cowboy is the way to go. And when I say hacking, I don’t mean a Pipe Dream-like minigame.

Each puzzle requires you type in some lines of code to hack cameras, doors, and other obstacles. Now, before you get intimidated by actually typing out lines of code, the whole process is surprisingly easy to follow.

The game gives you enough direction to be able to know or at least deduce what it is you need to type in order to solve the puzzles. It’s all logic-based and doesn’t go too deep in terms of creativity, but it’s a good intro to coding.

Quadrilateral Cowboy is also just an incredibly good puzzle game that deserves your attention whether you think you’re into writing code or not. Either way, you’ll be into coding by the end of it.

Even though SnapMap is just a single mode in Doom 2016, the coding tools that it gives you are absurdly powerful. It’s a bit ironic that a game about violently tearing through the flesh of demonic hordes has stellar coding.

You can set up a room of Imps and then, once they’re all killed, have the game summon a couple of Barons of Hell or a Mancubi. It’s simple, but effective and barely scratches the surface of what’s possible.

You can create entire doom levels with multiple layers of if-then statements for triggering numerous events based upon killing enemies, entering rooms, picking up items, or just about any action you can perform.

There was apparently even a SnapMap creator (Kotaku) who was able to build a MOBA with the provided toolset. The amount of intertwined logic is mind-bending and you can see it all in action below: