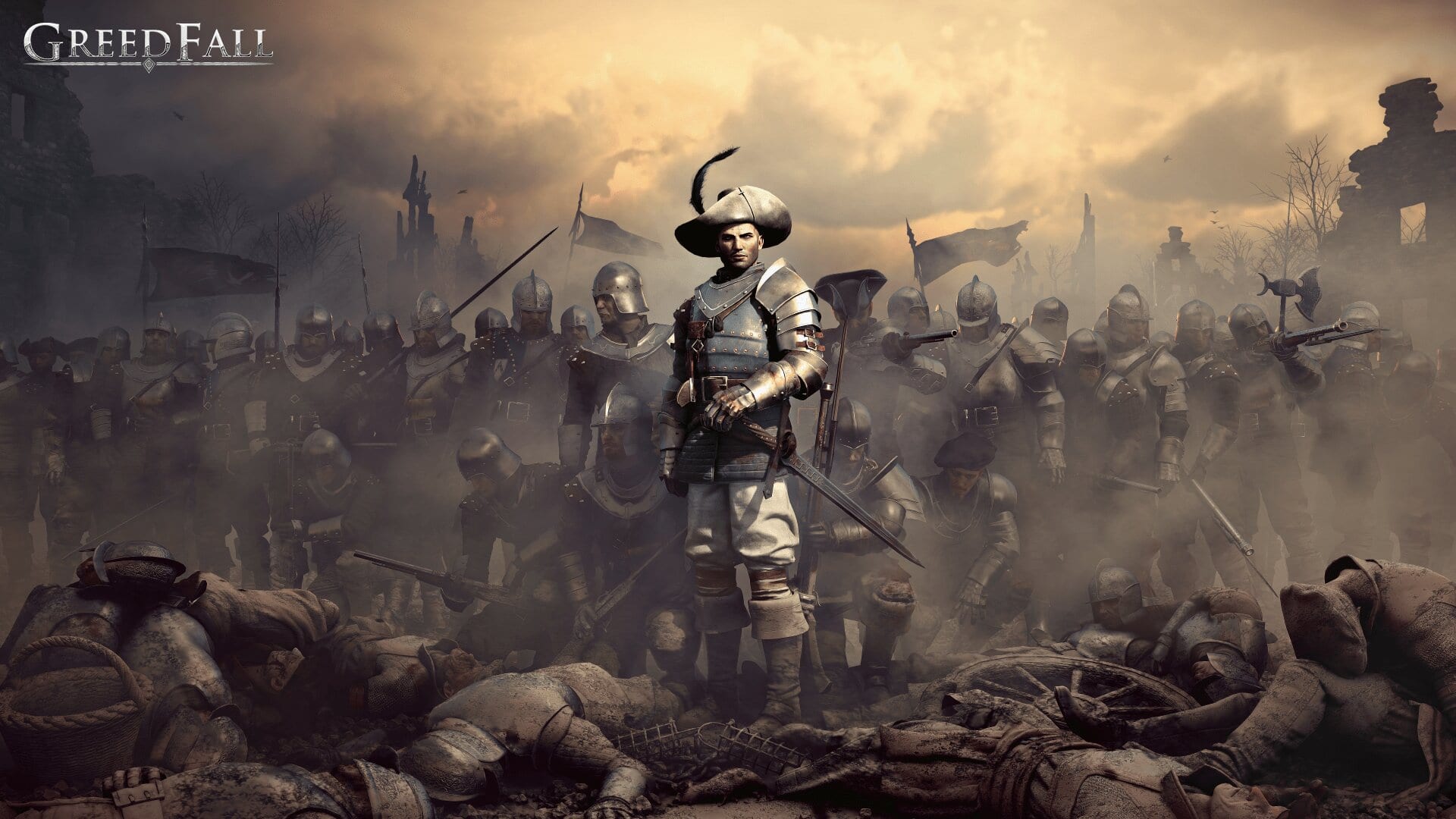 Spiders’ last couple of games, Bound by Flame and The Technomancer, have been flawed but showed signs of promise and originality. Greedfall, the studio’s new title, is not only a step forward in terms of ambition, but also in terms of quality.

It’s being sold as a BioWare style RPG, with a focus on story and characters, and while there’s plenty for fans of Mass Effect and Dragon Age to love, Greedfall is a somewhat lighter version of those games.

You play as male or female De Sardet, who you can customize extensively, and your role is as a diplomat of the Merchant Congregation who travels to Teer Fradee (a large and varied island full of cities and native settlements) to help his cousin Constantin settle in as the new Governor of New Serene.

By speaking to the various groups who call Teer Fradee home, you work towards bringing peace to the region while building relationships that will help the Congregation of Merchants.

That story is the highlight of Greedfall, seeing you build tangible relationships with groups and individual characters, all of whom have different desires.

It’s a juggling act that requires you to pay attention to what’s going on in the world, learn what everyone priorities are, and take your time.

The quest design in phenomenal across the board. The world expands as you progress, but each quest can have up to 20 different objectives. You’ll be running between cities to persuade high profile figure to help you, you’ll head into the wilderness to take on dangerous beasts, or maybe even help find a blind man who has got lost in the woods.

The quests are great in terms of narrative too. They generally tell their own contained story, focusing on one situation or group, while simultaneously pushing forward the overarching story.

It really pulls you into the story, giving you a huge amount of detail about the world and its history, while ensuring that you’re not left without anything to actually do.

The same can be said of the side quests, which aren’t simply a case of doing an easy fetch task for a character. You’ll meet new people and take part in complex quests, most of which you can change with dialogue choices or by choosing between stealth and combat.

Side quests are also where you’ll develop relationships with Greedfall’s five companions, all but one of which you can romance.

While your relationship with them is affected by how you act in certain main quests, you can also complete specific quests for them that change what they think of you.

You’re not BFFs from the moment you meet them, so you need to work towards gaining their trust, which could lead to a romantic relationship. If you don’t, they can turn against you or just decide that their time is better spent elsewhere.

If you want to get the most out of Greedfall’s story, it’s best to take your time and see what the world and characters have to offer. It’s rewarding to do so, so don’t rush through the main quests as quickly as you can.

Combat is a different story though. For the most part, taking on the small groups of monsters and humans you’re usually faced with is fun, but it’s overly simple and a little clunky.

While your combat focus is determined at the start of the game, when you choose between classes that focus on magic, melee weapons, and traps, you can mix and match your tactics no matter what character you initially try to build.

With a light and heavy attack, as well as a more powerful one that fills up as you land blows, your options in combat are limited.

Once you’ve learned what is most effective, which tends to be one-handed swords even if you’re initially a magic build, fights become repetitive, seeing you dodge and attack, with little strategy necessary.

It doesn’t help either that there are only about five different enemy types in the game, each of which have a particular weakness. Nor does the fact that the difficulty is inconsistent.

One moment you’ll be defeating monsters in two or three swings of your sword and the next you’ll be facing a boss that kills you in the same number and takes 20 minutes to defeat.

Due to many of the smaller enemies being easy to fight, it’s difficult to know whether your gear and skills are up to scratch for what’s next. You might breeze through a section due to your ability to wield two handed weapons, but the next might stump you because the enemies’ shields are too powerful for your attacks.

With some clunky movements, which carry over from general traversal, some frustration can come with the tricky moments too. Even though it’s mostly good fun, Greedfall’s combat is both overly basic and inconsistent, which totally contradicts the quest design.

You do have skills, attributes, and talents to complement your weapons in combat, though. By upping your strength or unlocking the ability to wield different weapon types, you get access to new gear, but there’s little to actually increase your stats.

Much of the skills system also centers around the narrative portion of the game. By unlocking certain skills, attributes, and talents, you can open up options to threaten or persuade characters at key moments.

These skills are actually the most interesting because some dialogue options that they unlock allow you to bypass certain parts of quests, save money, or develop relationships in ways you wouldn’t otherwise be able to.

And again, while the quests you’re actually completing are very well designed, the world you’re exploring as part of them is also inconsistent.

The world is split into various open areas, including cities and dense woods, but there’s strange and beautiful things you’ll notice as you explore further afield.

First of all, many of the locations are stunning. The lighting effects, particularly in the more open outside areas is impressive, with the sun being close to you at all times.

However, those towns are empty. Huge town squares only have one or two people in them while vast markets have no merchants, let alone customers.

On top of that, there’s a strange amount of repetition in the town design. Each city ambassador’s building is the same, maybe with different colored carpets, and the design of De Sardet’s residence is repeated more than once in the five or so towns you visit.

It’s so obvious that I often had to question whether I was even in the right town. Without the waypoints to guide you, it’s pretty easy to get lost in Greedfall’s world.

In short, Greedfall is a decent but wildly inconsistent game. The quest design is some of the best and most complex in years, yet the combat is clunky and generic. The world can amaze out in the open but the towns are devoid of life.

It’ll no doubt be right up the street of Bioware fans and De Sardet’s journey is certainly a fun one, but Greedfall is unremarkable in a few key ways.

Should You Buy Greedfall?

If you’re a fan of old school, narrative driven RPGs, it’ll be perfect for you. Just don’t expect something with as much depth as The Witcher 3.

Greedfall is out now PS4, PC, and Xbox One.

Greedfall is developed by Spiders, who previously developed Bound by Flame and The Technomancer.

Final Fantasy XIV Has Its Own Fashion Magazine: Meet Its Creators
To Top