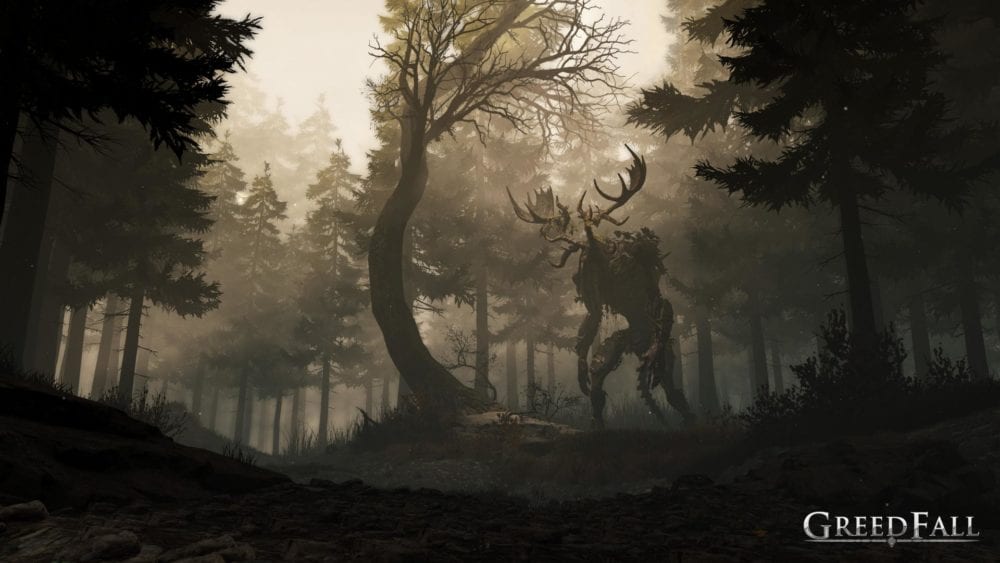 GreedFall was a game that I only became aware of at this year E3 Press Conference. It’s striking story trailer caught my attention, with its dark tone and adult feel distinctly reminiscent of one of this generation’s best games, The Witcher 3 –which is exactly why it should be on your radar as well.

CD Projekt Red’s RPG is, of course, one of the most beloved and respected of all time, featuring fantastic writing, engaging characters, and an astonishing level of detail put into even the smallest things.

Refreshingly, the game put very few of the typical fantasy tropes on display, and the few it did came with a heavy layer of cynicism as a caveat. Geralt’s last adventure set a benchmark for the industry that few games can come close to, and one I would argue that none have yet exceeded.

Whenever a game as influential as the Witcher 3 is released, it sends ripples throughout the industry. It inspires developers, and that inspiration can make its way into the mechanics of their games.

The most recent Assassin’s Creed games (Origins, and Odyssey) are good examples of this. In particular, the manner in which side-quests feed into the main storyline is something very much inspired by the Wild Hunt, and Ubisoft has been quite upfront about their influences.

An action role-playing game set in a fantasy version of the 17th century, GreedFall also wears The Witcher 3’s influences on its sleeve –something developer Spiders’ isn’t shy to admit.

“It’s difficult to tell you exactly what [games] were the exact influence,” said CEO of Spiders and lead writer on GreedFall Jehanne Rousseau in a recent interview. She explains them as “a mix of different things. For example, the faction system was probably inspired by Fallout — not the last one. I think it’s a mix of plenty of things. Of course, we are still looking at recent games such as The Witcher 3”

In GreedFall, you play as a scion of a noble house who embarks on a journey to a newly discovered island known as Teer Fradee. The Old World is overpopulated and ravaged by the deadly and incurable Malichor disease. The inhabitants of the island possess a kind of natural magic, and it is thought that by harnessing it a cure might be found.

The colonists, in typically short order, begin to commit all kinds of atrocities, and the inhabitants summon the beasts and spirits of the island to drive the invaders back into the ocean. It is into this powder keg of a situation that your character arrives.

The monster design of GreedFall shares that sort of Gaelic/Germanic inspiration that was used to such great effect in the Wild Hunt, and the demonic tree-kin shown are reminiscent of Spriggans and Leshen. These wood-spirits contrast well with 17th-century arms and armaments and give the game a unique visual identity.

It’s a cool setup, one from which a lot of morally grey choices can occur. It is not yet clear, of course, how well this will all be handled. Colonialism is a sensitive subject, and some of the themes and situations shown in the trailers bring to mind real-world atrocities.

What is more clear, though, are the mechanics of the game, and it’s here that the Witcher comparisons really show through. As your character in GreedFall gains experience, you can unlock skills from three trees (Warrior, Technical, Magic) and mix and match them to create a playstyle all your own.

The versatility and build variety was something that gave incredible replay value to the Wild Hunt. I spent far too many hours agonizing over the most effective setup of signs and potions for my Geralt, and I look forward to doing the same thing here.

There is also a tactical pause available in combat, which will allow for more strategic depth. Considering that combat in the Witcher never reached the heights of its narrative or worldbuilding, this may allow GreedFall to differentiate and improve upon that formula.

GreedFall features a wide variety of weapons suitable to the era, from sabers and rapiers to pistols and muskets. The action is fast-paced, and there is a wide variety of utility magic like stasis and healing to compliment the more standard direct-damage spells, which should further increase build complexity.

There are also factions in the game, and depending on your actions and even your clothing, they will react differently to your character, kind of like they did in Fallout: New Vegas. You can even recruit companions to watch your back, and they will have their own allegiances and storylines.

It looks great too, with inviting environments and impressively detailed armor sets. Character models are emotive, and there are even Mass Effect style NPC interactions, complete with dialogue options and romanceable characters.

But, and this is a fairly big but, this an exceedingly ambitious project for developer Spiders. Their last game, Technomancer, received a lukewarm reception, and it remains to be seen whether they can stick the landing here.

GreedFall certainly looks impressive, but demos shown at E3 have been hands-off, and we won’t really know for sure until reviews go up.

Still, there was a time when CD Projekt Red was in Spiders position, a AA studio looking to make it big. With Cyberpunk 2077 on the horizon, it’s hard to imagine a time when they were ever anything but an industry leader. I’d like to give Spiders the benefit of the doubt, and new single-player IP is always a cause for celebration in my books.

Will GreedFall measure up, and put Spiders on the map? Time will tell, and we won’t have to wait very long to find out. In the meantime, check out the below video to get a feel of the gameplay for yourself.

GreedFall launches Sep 10 for PC, PS4 and Xbox One.