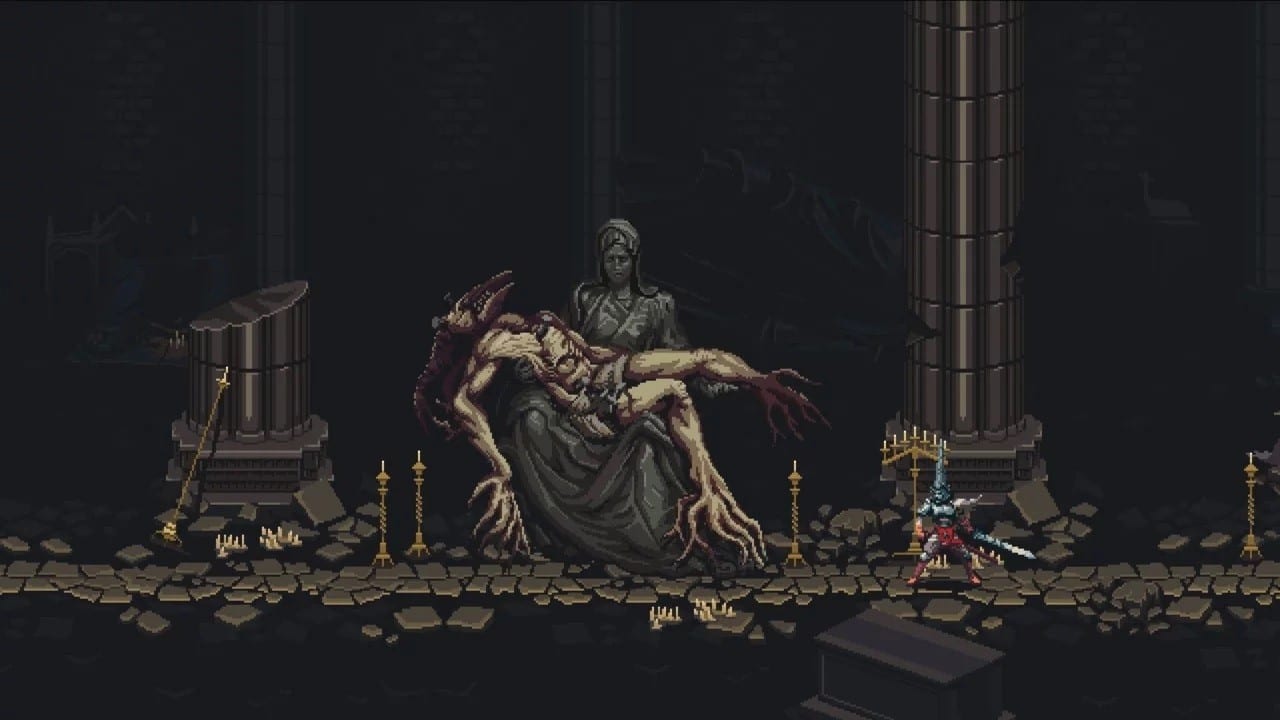 Blasphemous, The Game Kitchen’s latest game, is a challenging 2D platformer/metroidvania with hints of Dark Souls-like combat. And, as with any title that takes cues from Dark Souls, bosses are at the forefront. If you can’t seem to defeat this arboreous abomination, here’s a quick and dirty guide on how to beat Ten Piedad.

One of the first bosses teased during Blasphemous’ development was the towering Ten Piedad (Spanish for “Have Mercy”). This unholy combination of Groot and a goat can be encountered early in the game and might prove challenging for some players.

How to Beat Ten Piedad

Where to Find Ten Piedad

Ten Piedad roosts at the bottom of the Mercy Dreams area. If you find an NPC near a Prie Dieu altar, you’re close. Save at the altar first, then head left, and you will find Ten Piedad sleeping on a statue.

Like any 2D platformer/metroidvania boss, Ten Piedad relies on powerful attacks that punish unwary players. However, he is as fast as a tree, so dodging his attacks is easy; you just need to recognize his tells and resist the urge to mash the attack button.

One of Ten Piedad’s most common attacks is a simple swipe. If he kneels, that is your cue to either jump over or slide under his gnarled claw. Afterwards, when Ten Piedad slowly stands up, he is open to attack.

Occasionally, Ten Piedad will spit out seeds that bloom into thorny bushes when they hit the ground. Dodge the seeds and attack him while he’s hocking these evil loogies. While the bushes pose little threat on their own, they can block your escape when Ten Piedad uses his next two attacks, so clear the way by wacking the bushes with your sword whenever possible.

On a side note, Ten Piedad’s seeds harmlessly dissipate if they hit a wall, so if he spits against one, take advantage of the situation and start weed wacking his shins.

Sometimes, instead of kneeling to swipe you, Ten Piedad will slam his foot into the ground. While you can avoid this attack by running away or sliding under him (normally, you just bump off his leg while sliding), the foot stomp’s true danger lies in its aftermath.

After Ten Piedad stomps his foot, roots burst out of the ground. These roots home in on your location, so you should stay on the move. Early in the battle, Ten Piedad only sends out two roots, but when he is significantly injured, he summons three. Just keep an eye on the ground and keep moving.

Ten Piedad’s final attack is probably his most devastating. Whenever he turns to face the camera and raises his fists above his head, he is about to slam them onto the ground and summon more roots.

Unlike the foot stomp roots, the fist slam roots erupt around Ten Piedad in set locations. However, the number of roots increases later in the fight. At first, he only summons three roots on either side, but when critically wounded, he creates five.

Since Ten Piedad takes a few seconds to wind up the fist slam, you should attack him while he’s open. If you’re close enough, you can walk under his legs, hit him once or twice, and then run away to avoid the roots. However, it’s easier to attack him at a distance with a prayer or special attack —if you have unlocked one, that is.

With the proper dodging and timing, you will fell Blasphemous’ evil ent in no time.

If you talked to the woman outside of Ten Piedad’s arena, she will help you during the fight. While she only heals you if you are low on health, many of Ten Piedad’s attacks hit like a falling tree, so you will thank your lucky stars if you asked her for help.

Just note that she takes a while to charge her healing spell, so try not to die before she finishes.

If you do die during the Ten Piedad boss fight, though, your Guilt will wait for you in the arena. You might be tempted to retrieve the Guilt as soon as the fight starts, but you’re better off waiting until you’re injured.

After all, retrieving Guilt rewards you with some health, so it’s basically a free healing potion lying on the floor when you need it.

That’s all you need to know about how to beat the Ten Piedad boss battle in Blasphemous. Be sure to search for Twinfinite for more tips and information on the game.