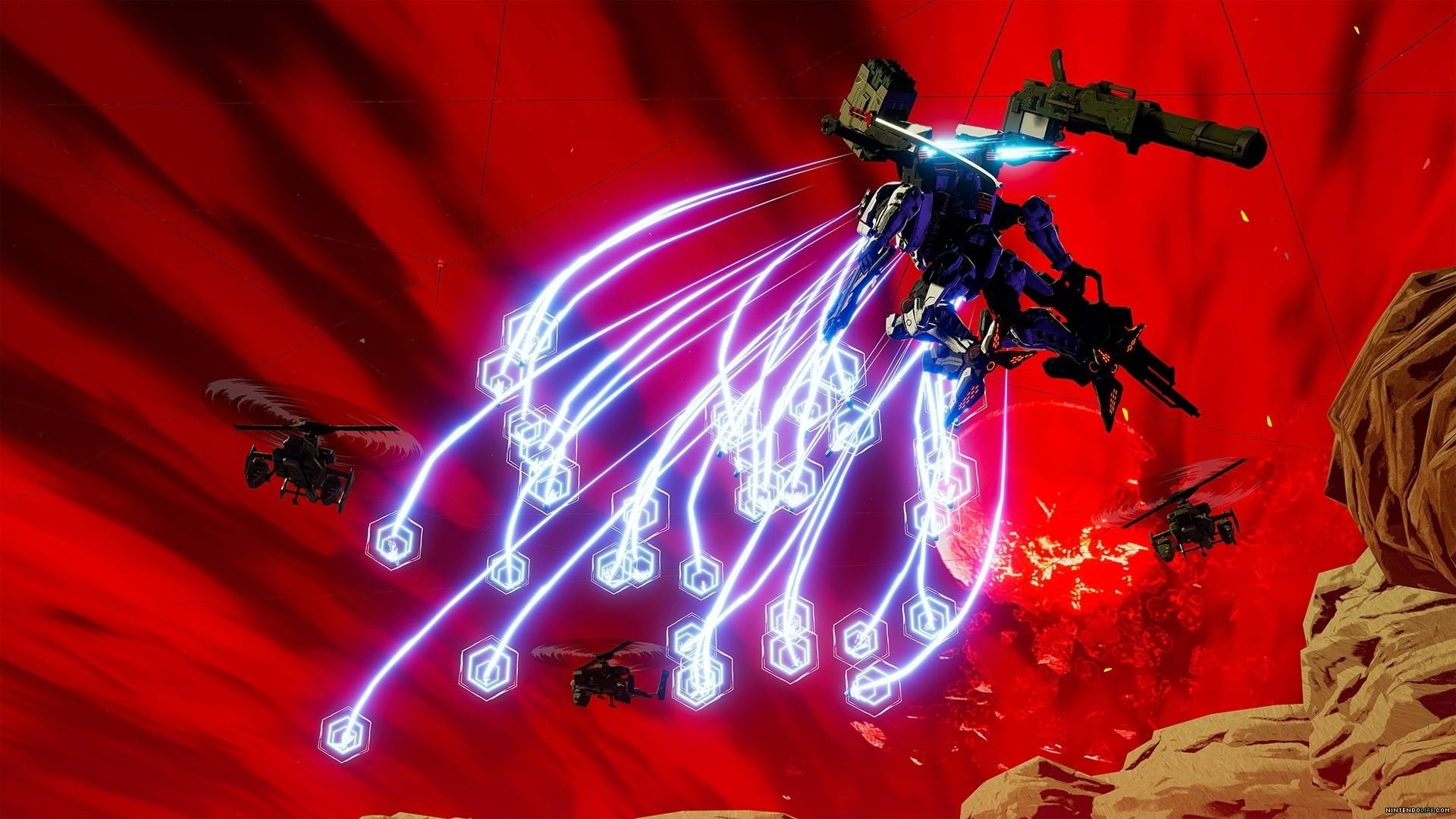 It’s a Complex Mech Game With Tons of Customization

The most important thing to know about Daemon X Machina is just how complex it is, both in terms of base gameplay and how you build your mech, called an Arsenal.

Daemon X Machina is all about customization, letting you fine-tune the parts and weapons your Arsenal uses. You can swap out different pieces of armor including the head, torso, legs, and each arm.

Then, on the other side, you can equip weapons in each hand, two backup weapons stored in pylons, a shoulder weapon, and an auxiliary weapon.

All of these aspects have different stats and can affect things about your Arsenal, like its resistance to damage or your boosting speed. You get the idea.

If you’ve played a game like Armored Core, you know what to expect out of Daemon X Machina. Its combat is blazingly fast, its hud is a bit cluttered, and you’ll need to keep track of multiple enemies and aspects during battle.

If that all sounds up your alley, then Daemon X Machina is a mech game that does the genre well.

The Story Gets a Lot More Interesting Later On

One of the biggest barriers to starting Daemon X Machina is how slow, and even confusing, its story is at the start. The game drops you right into the thick of things, with little to no explanation of the world, various organizations, and more.

While the gameplay is certainly the star of the show in a mech game like this, the first few hours might leave you scratching your head with the story.

There is good news, however, as the story slowly ramps things up across the experience, and gets more involved.

You’ll even start to get more context and info on the location, the Oval Link, and the mercenaries called Reclaimers.

By far the highlight of the story are the different Reclaimers (mercenaries) you meet and take on missions with.

They’re an eclectic cast of characters, like the smarmy upstart pilot Johnny G, or a literal Butler that pilots a black Arsenal.

While the start may be a little rough, Daemon X Machina definitely gets more interesting as time goes on.

Just like other mech games, Daemon X Machina is a mostly single-player experience focused on letting you create the machine you want.

However, there are options for co-op as well, meaning you can play the game with a group of friends.

Between every mission, you’ll go to a massive hangar that your Arsenal is housed in, where you’ll change equipment, upgrade your character, and more.

In that hangar, there’s a console to the right of your Arsenal that’ll let you launch co-op, both with friends by creating a room or with random players.

As you might expect, taking missions on with four human players drastically changes things, and it can be an absolute blast to jet around the battlefield with others.

You can also play Daemon X Machina in local co-op, however, every player will need their own Switch and a copy of the game.

It Runs Just as Well in Handheld as in TV Mode

Considering Daemon X Machina is a Switch exclusive there’s some great news: the game runs pretty much seamlessly in both TV mode and handheld.

It’s honestly pretty impressive that things don’t take a hit when you switch to handheld, making it a great option for playing on the go.

Like most Switch games, the resolution does take a little hit when going to handheld, but luckily the framerate stays totally steady.

The YouTube channel ContraNetwork has a framerate test of both modes, and as you can see in the video the game runs at 30fps almost all the time, no matter which mode you’re playing in.

With a high-speed mech game like Daemon X Machina, visual fidelity is hugely important, and it’s clear the team at Marvelous knew that.

If you’re looking for an action game on the go, Daemon X Machina might be the perfect pick.