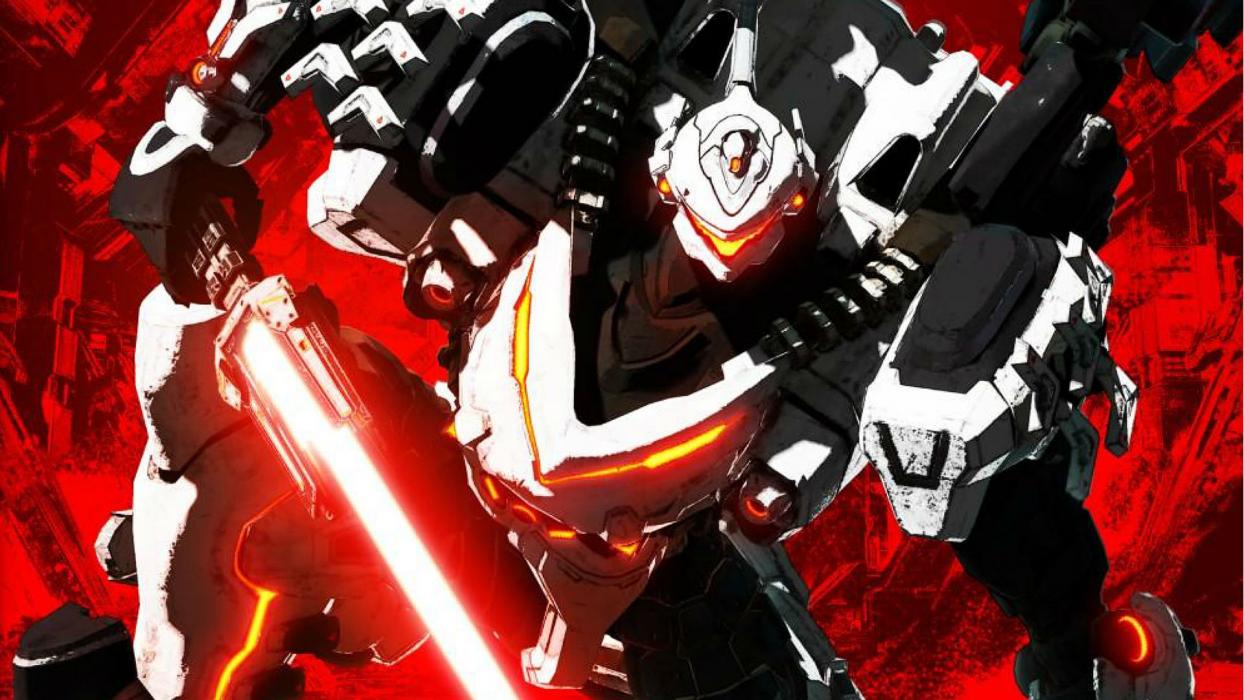 Multiple times in Daemon X Machina’s story characters said something along the lines of ‘what is going on,’ and that’s about the best way I can encapsulate my initial experience with the game. It’s an overwhelming experience, and while that may initially sound bad, things only get better the further you get.

Let’s get something out of the way first, Daemon X Machina is a mech experience through and through, and that includes all the complex mechanics, crazy stats, and pieces of equipment you could want.

Daemon X Machina drops you right into the thick of things, with little to no explanation. An initial cutscene and story dump introduce you to the universe, where the moon has dropped onto Earth, with the impact area being called the Oval Link.

You play as a mercenary known as an Outer, someone enhanced with a particle known as Femto. Your mission is to help different consortiums fight off corrupted AI that are bringing humanity to the brink of extinction.

The story feels ultra bare-bones at the start of the game, and the game doesn’t do a great job of explaining different areas, groups, and ideas. However, there’s a lot more context and development layered on as your progress through the game.

At the same time, though, Daemon X Machina is a game that could have really benefited from a glossary detailing different ideas, characters, organizations, and more. It’s honestly baffling that there isn’t some kind of database feature implemented.

The game also introduces a wealth of characters who all work for different mercenary groups, and it’s constantly a struggle to figure out who has good intentions and who has bad ones, although I suspect that’s part of the point.

Just like with the story, Daemon X Machina’s gameplay throws you right into the deep end as well. The crux of the game has you building your own mech, called an Arsenal, piecing it together from different armor pieces and weapons.

You can equip different heads, arms, legs, torsos, processors and more for armor. Weapons, on the other hand, have you bringing in an assortment of tools like assault rifles, grenades, missile launchers, cannons, laser swords, and much, much more.

You can equip two main weapons in your hands, two more weapons on pylons on your back, a shoulder weapon, and an auxiliary weapon or support item.

This gives you a literal ton of options for outfitting you Arsenal, and past that you can also pick up and instantly equip weapons from shot down enemy mechs.

Customization in Daemon X Machina is intense, and each and every piece of equipment will affect your Arsenal’s overall stats and its performance –something you need to keep in mind.

Fans of mech games will absolutely find a lot to love there, especially with how you can edit your Arsenal’s paint job and look as well.

Now taking that customization, you move to the game’s insanely high-speed combat.

Daemon X Machina is split into a ton of little missions that you undertake, both main story missions and optional missions. Most of these missions take roughly 10 minutes to complete, so they’re generally quick combat affairs.

Your arsenal can move on the ground and in the air, and you can boost at high-speed using the right bumper, at least in the default controls. Like everything else in the game you can fine-tune your control scheme to whatever you want it to be.

On top of all your different weapons, you have multiple gauges to manage. VP is your Arsenal’s health, Stamina manages your boosting, and a Femto gauge lets you use special abilities.

Those abilities are channeling Femto into different parts of your mech to increase its performance, by pressing up or down on the d-pad. You Arm to increase weapon damage, Wing to boost your speed and boost, or Shield to help protect yourself from damage.

The other use for Femto is to summon a Mirage by pressing down the right stick, which creates a full AI double of your Arsenal that will attack enemies on its own.

There’s a breakneck speed to Daemon X Machina’s combat, and the game uses an adaptive lock-on system to help with this, instantly locking onto nearby enemies without the player actually having to hit a button.

Fighting random AI enemies is fine, but things get really exciting when you take on other Arsenals, which the story and multiplayer do constantly.

Combat gets deeper the more you learn and understand, as well as the more equipment and weapons you get. Luckily, your main way of getting new weapons is to loot Arsenals you shoot down, so there’s a natural kind of progression.

While the base combat is incredibly strong, and it runs without a hitch, there are times where things can get a little frustrating.

Some boss battles pit you against enemies that are so fast it’s almost impossible to lock on, and many of these same boss battles handicap you with a severe shortage of ammo.

It’s unfortunate because attacking with just melee weapons isn’t always a viable option, but I was forced to do so in a few battles, which really made them a slog.

Missions also aren’t as varied as I would have liked across the board, although it’s a small complaint, as there is still some nice variation.

In addition to the basic ‘destroy all enemies’ missions, sometimes you’ll be tasked with defending a particular point, taking on massive bosses, or even special objectives like shooting down meteors.

A particular favorite of mine was a mission that had me speeding through a massive tunnel to escape while enemy Arsenals pursued and tried to destroy me.

Backing up the high-speed combat is a phenomenal soundtrack that alternates between techno and downright heavy metal with lyrics, bumping up that gritty sci-fi feel.

The team at Marvelous has done an incredible job optimizing the game, as it always ran without a hitch, whether I was playing in handheld or TV mode. Of course, TV mode bumps up the resolution which can make some of the environments really pop.

The same, however, cannot be said for the character models, which don’t look great in cutscenes, even if the Arsenals do. Luckily, there’s a robust character creation system that gives you practically as many options as the Arsenal customization.

A neat touch that leapfrogs on character creation is the skill system, which essentially has you enhancing your Outer with cybernetic implants. Certain skills you learn will drastically change your character’s appearance, like changing out your arm for a repair tool, or implanting tracking units in your eyes.

It’s a small, but neat touch that represents your skills and growth directly on your character.

Daemon X Machina certainly won’t be an experience for everyone, and its greatest flaw is how hard the game is to get into. The complexity won’t be a problem for experienced mech players, but if you’re not familiar with the hardcore mech genre, the complexity might be enough to put you off.

It also takes hours for the story to pick up, or even start making any sense whatsoever. Things do get better and fairly interesting, although it’s certainly not a top-tier story.

There’s plenty of content to wade through with the lengthy story, assortment of side missions, and multiplayer options with friends or strangers (strictly co-op not versus).

If you’re willing to tough out the rough opening hours, there’s a deep mech experience lying underneath with exceptional combat that constantly keeps things exciting, even with a few issues.

Should You Buy Daemon X Machina?

If you’re a fan of intense mech games like Armored Core or Steel Battalion, then you should find a lot to like about Daemon X Machina. If you aren’t familiar with those types of games, however, the complexity might be off-putting.