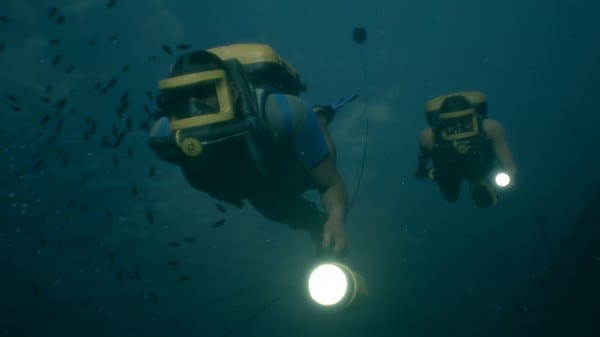 If you’re playing through Man of Medan, you might want to see all of the endings that the game has to offer. This will require you to trigger certain actions before you reach the end of the story. Here’s how to get all endings in Man of Medan.

Since we will be discussing all of the endings in Man of Medan, this should go without warning but there will be tons of spoilers from here on out. This is your last chance to turn around if don’t want to get spoiled.

How to Get All Endings in Man of Medan

Towards the end of the game, the group will attempt to put out an SOS signal using the radio on the deck of the ship. When you first make contact with someone, they will ask you what’s going on. You can either give them the exact coordinates or you can freak out and just yell at them.

If you give them the coordinates, the military will arrive via helicopter at the end of the game, but they will not be saving the group.

If you ended up breaking the distributor cap by messing up the QTE’s with the rats covering Olsen’s dead body, you won’t have access to the boat, leaving the group with one way out, the military.

Note that if you do mess up the first conversation over the radio and somehow manage to not give up your coordinates, turning on the generator soon after will fix that up.

There’s also a second route that involves the distributor cap.

When the group gets to the radio and then decides to split up to look for the generator, you wanna make sure that Brad and Fliss stay together and that Julia goes with Alex.

Soon, Brad will go alone to check out the situation and ends up running into Olson, who has the cap in hand. After some struggling, Alex shows up to help and urges Brad to run away so that he can shut a gate and leave Olson alone.

If you choose to stay for a few more seconds, Olson will end up on top of Brad right underneath the gate. Just fail to get away and Alex will drop the gate on top of Brad, killing him and breaking the cap in the process.

But anyway, once the helicopter arrives, the group will be very ecstatic and happy to see someone coming for help, but this is actually the worst ending possible.

To cover up the secret of the Ourang Medan, the military men will shoot and kill all members of the group on-site, leaving the secrets of the Manchurian Gold under wraps.

Escape on the Duke of Milan – Man of Medan Endings Guide

This is essentially the “good” ending that allows the group to escape on Fliss’ boat. As long as you manage to keep the distributor cap safe from harm, the group will be able to finally leave the Ourang Medan, even if you managed to call the military for help.

Once the credits roll, there will be a scene showing the helicopter arrive onto the scene, and two men walk out and begin to explore the ship. They soon run into Danny, who has managed to grab hold of a sledgehammer and begins to attack the two men.

No Cap for the Boat and No Help

Now, this ending happens if you don’t call for help using the radio, you don’t turn on the generator, and you don’t get hold of the distributor cap still intact.

The group ends up stranded on the Ourang Medan without food or water but Fliss chooses to still go on her boat and paddle slowly along the water, hoping to catch a current. The rest of them choose to leave her be and decide to stay on the ship until hopefully, someone comes for them.

This ends with Julia hallucinating once she’s back inside and we see her face a terrifying version of Brad with a huge evil grin on his face and then it cuts to black.

If you manage to give your coordinates to the military over the radio but fail to mention the actual name of the ship (this is found with a collectible) then they will arrive and lock up the group in a prison to prevent the world from knowing the true secrets of the Ourang Medan and the Manchurian Gold.

Also, make sure to lose that cap again so the group can’t escape on the Duke of Milan.

So to summarize this one:

Conrad Comes to the Rescue

If Conrad manages to steal the pirates’ boat at the beginning of the game during the kidnapping, he will eventually come back to the Medan and bring back an even bigger boat to help rescue the group.

If you’ve found the cap and managed to not give your coordinates out, the group will escape before Conrad comes back, leaving him to explore the ship and eventually goes crazy due to the hallucinations from the “Manchurian Gold.”

So to sum everything up, here’s how to get all of the endings.

There might be some more endings in Man of Medan, but we’re still digging through the various choices to try and figure out if there are any. We’ll be sure to update this post if we come across one with everything you need to know.

And that’s all you need to know about how to get all endings in Man of Medan. For more on Supermassive’s newest title, do be sure to check out our expansive Wiki Guide on the game right here, and while you’re at it, feel free to look into some of our other relevant guides down below: