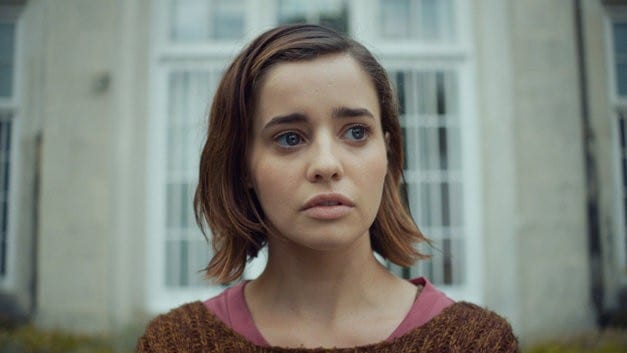 While narrative focused, choice centric games have become more and more popular over the last five years or so with the emergence of Telltale and the release of Life Is Strange, Full Motion Video (FMV) games have been few and far between, and even fewer have been worth playing.

The likes of Guitar Hero Live, Need for Speed, and Quantum Break all incorporated live action in different ways, but it was more of a presentation choice than an overall focus that incorporated choices and gameplay.

We’ve seen a few FMV games released, such as Late Shift, but none of them have been as good as Erica, the new PlayStation 4 exclusive that was revealed and released during Gamescom’s Opening Night Live.

You play as Erica (Holly Earl), a young woman who is haunted by visions of her father’s death. After she’s sent a gory message, she’s taken into protection at the hospital her father used to own/run by a police Sergeant.

However, not is all as it seems at the hospital and it plays a much larger role in the mystery of Erica’s nightmares than it initially seems. After a short introduction, you’re launched into a story of cults, murder, and strange drugs.

There are some pacing issues, with the narrative suddenly switching from a slow build to fast paced mystery thriller after about half an hour, but it’s generally compelling throughout.

A lot of that is down to it being surprisingly dark, violent, and more complex than the basic crime thrillers we usually get from FMV games.

Some of the imagery is not for the faint hearted, but it’s the willingness to get weird that makes Erica’s story one that’s easy to get invested in.

Thankfully, the game’s production value and acting generally live up to the story. Holly Earl (who you should check out in the British comedy show Cuckoo) is great as Erica herself.

At first, she seems like little more than a quiet, reserved young girl who’s scared of everything that’s happening around her. You can do a lot to keep her that way through the dialogue choices, but Earl’s just as adept at portraying Erica as a determined hero who just wants to uncover the truth.

There are some other good performances too, notably from Terence Maynard, who we see fleetingly but is perfectly mysterious and difficult to trust as the hospital’s owner, and Sasha Frost, who plays one of the girls being treated at the hospital.

That’s not to say all of the performances are good, though. A few of the less important characters stand out as below par, especially when acting opposite Earl or Maynard. Thankfully, the main cast is generally solid though.

What surprised me most about Erica though, is the high quality production value. Aside from one or two scenes in Lucien Flowers’ (Maynard) office, the set design and cinematography are commendable.

We’re never left lingering on a single shot and it never looks cheap, as live action scenes often do in the gaming world.

There are some transitions between animated gameplay sections and live action shots that look a little awkward, but Erica generally has the visual quality of most TV shows and indie movies.

There are even some truly impressive shots towards the end, as the story reaches its dramatic conclusion.

While the story might not be for everyone, as is the case with anything like Erica, the game avoids many of the common live action game pitfalls.

The lighting, acting, cinematography, and story all come together to make something genuinely compelling, which can rarely be said about something like Erica.

When it comes to the gameplay though, Erica does nothing new. I didn’t expect anything complex or groundbreaking, since it’s live action, but your possible actions are very limited.

Using either your phone, PlayLink style, or a controller, you do things like swipe in particular directions to open boxes, clear dust off items by swiping all over your screen or a DualShock 4’s touchpad, and choose dialogue options.

You’re never left without something to do for long period of time, with something popping up on screen every five to ten seconds or so, and none of the actions are frustrating, it’s just mundane stuff.

The story is Erica’s focus, as it should be, but it would have been nice to see the gameplay develop over the course of the game too, maybe adding something a little more interesting after the small swipes and single button presses become overused.

Erica is the perfect length for a one sitting playthrough too. My first came in at just less than two hours, so about the length of your average movie.

There are no chapters, levels, episodes or anything like that to worry about. It’s a single, contained story that’s meant to be experienced like a movie, just one that you have a role in how it plays out.

Of course, since you can make choices throughout that change how Erica acts and how the story plays out, you’ll need multiple playthroughs to see everything possible.

There’s multiple endings, different fates for many characters, various ways for you to make Erica act, and trophies to earn that are based on hidden moments and collectibles strewn throughout.

The main plot line doesn’t change too dramatically, but it’s fun to experiment with all the different fates you can cook up for Erica, her friends, and her new enemies.

In short, Erica’s quality comes in how it avoids the pitfalls of other recent live action games. It doesn’t rely on gimmicks, most of the acting is great, it’s excellently shot, and the story is complex and confidently told.

The gameplay may be uninspired, but Erica is the best FMV game we’ve had in a long time and is the perfect length for a single evening’s entertainment.

Should You Buy Erica?

If you enjoy narrative and choice based games, yes you should buy Erica. It’s not long, though, so it you want something more substantial, there are other games that would be better choices.

Erica is out now on PlayStation 4.

Erica is developed by Flavourworks. It is the first game from the London based studio.