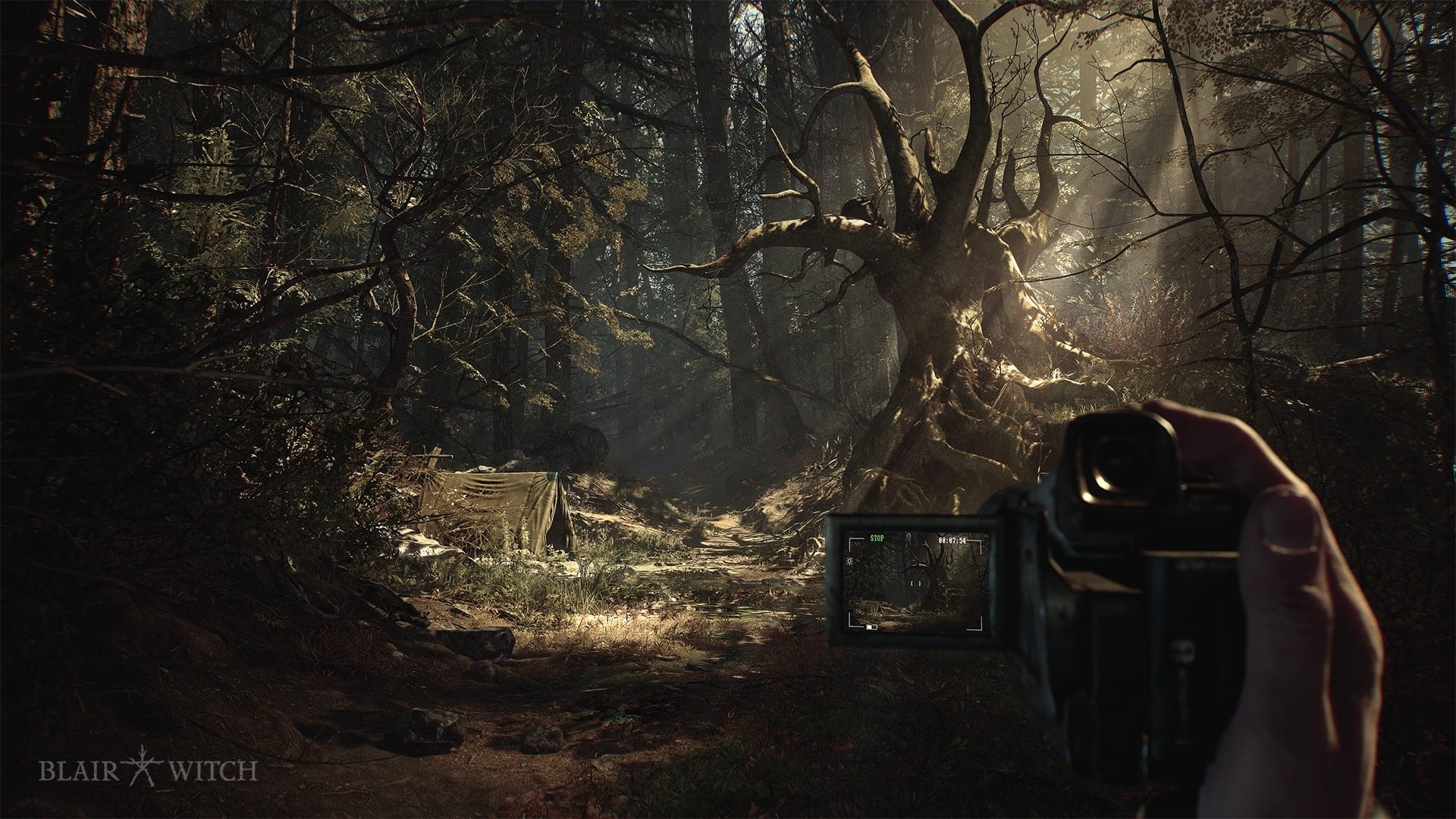 If there was one game from this year’s E3 that pretty much nobody saw coming, it was Blair Witch. Coming from developer Bloober Team — the folks behind the likes of Layers of Fear and Observer — I had high hopes that the game could replicate the bone-chilling moments and tense atmosphere of the 1999 movie.

No matter how hard it tries, though, Blair Witch rarely succeeded in truly scaring me.

If you’ve never watched 1999’s Blair Witch Project, then good news. Blair Witch (the game) is inspired and based on the cinematic lore of Blair Witch, the game tells an original story with new characters and monsters to meet (or avoid) along the way.

This time, the story focuses on Ellis, an ex-cop with a mysteriously troubled past and an estranged partner he still kind of talks to. He’s heading to Black Hills Forest — with his awesome doggo friend Bullet — to help the police search for missing child Peter Shannon.

Of course, it takes all of about 15 minutes for weird stuff to start happening, with Ellis slowly but surely finding himself more and more alone and isolated from reality as he ventures further into the shape-shifting forest.

For the most part, Ellis’ past and his quest to find Peter is the extent of Blair Witch’s narrative, but they’re presented in such a way that makes you want to go further into a forest that literally looks like it’ll eat you at the first opportunity.

Found footage tapes feed you tidbits of information on the whereabouts of Peter and explain exactly what happened, while Bullet will help you track down scents on items you find that’ll send you further into the forest and (hopefully) closer to your goal.

Of course, this is Blair Witch, so nothing can be taken at face value. Black Hills Forest isn’t just filled with supernatural creatures trying to eat your face.

As Ellis heads deeper, the forest changes its shape and environment almost entirely. You’ll find yourself walking through completely foreign, built-up areas, before being thrown back to somewhere you’ve been before with a subtle, unsettling change.

Throw in the addition of creepy totems hanging through the woods — that are apparently the only thing good ol’ Bullet is afraid of, so you need to destroy them — and something occasionally moving in the distance and Black Hills Forest has a tense atmosphere, whether the creatures are nearby or not.

Here’s the thing, though. Blair Witch is atmospheric, but never really scary.

The creatures of Black Hills Forest should be the scariest part of Blair Witch, but it wasn’t until the final chapters of the game that they really showed up in any big way, and by that point the game’s shoved down your throat how to take them on (or avoid them) that they don’t really seem all that scary.

Taking a leaf out of Alan Wake’s book, Blair Witch gives Ellis the combination of flashlight and canine as your weapons. Simply pointing your flashlight at a creature is enough to scare it off… or make it burst into flames. Honestly, I’m not sure what the real deal is with it, but they go away.

Ellis and his flashlight aren’t enough to take the creatures down on their own, though. Bullet becomes an integral part of your adventure and will look and bark in the direction that creatures are hiding in the forest.

He’ll follow the scent of items, head into nooks and crannies you can’t access to check things out, and is basically the best boy. You can pet him and feed him snacks, too. You should do this.

Jokes aside, though, Bullet acts as a bit of a safety blanket for Ellis, as he has flashbacks to his shady past that we’re not going to spoil for you here.

He struggles to deal with the sense of isolation Black Hills Forest instills, and keeping Bullet close by keeps him calm. Oddly, though, during segments where he left me for any extended period of time, I longed for his companionship.

Bullet can’t be attacked by the creatures, nor do you have to take care of him in any way, and as such, he almost acts as a double-edged sword for Blair Witch.

I loved having him by my side and his gameplay mechanics were enjoyable as well as useful. But as a result, he made everything way less scary.

Encroaching creatures would have been scarier had I not had Bullet pointing out the direction I should be shining my flashlight way in advance, and not having him altogether would have left Ellis open to ambush more, opening the door for scarier set-pieces.

Blair Witch isn’t just a walk through a shape-shifting forest. Shining your flashlight at lightning-fast creatures that hide behind trees and following the scent of Peter; the camcorder that Ellis brings with him becomes one of the best elements of the entire experience.

Found footage tapes can be found littered throughout the forest, and Ellis can pause, rewind, and fast forward through these to alter the environments in the forest. For example, at one point a tree had fallen across a path and I couldn’t get past.

So by watching one of the found footage tapes I’d picked up that shows the tree falling, I was able to rewind and pause the tape at the point it was still standing, allowing Ellis to carry on his merry way into this insanity-inducing forest.

Bloober Team never really pushes this mechanic far enough, though. Finding one of the tapes was a signpost I’d be using it almost immediately or in the near future, and watching the tapes made it clear what object or element I was going to be manipulating with my camcorder controls.

It’s a great idea in theory, I wish they’d been a little more daring with the execution.

The camcorder’s night vision is also used to navigate dark areas where you can’t use your flashlight, allowing you to make out the daunting silhouettes of creatures lurking in the distance, or revealing hidden messages invisible to the naked eye.

If you couldn’t tell by this point, I’m very much on the fence about Blair Witch. I loved exploring Black Hills Forest, learning about Ellis’ past, and utilizing Bullet and the camcorder, but it never feels like it pushes any of this far enough.

Combat feels basic and a little underbaked, the camcorder puzzles feel too basic, and I seldom felt that same fear-induced paralysis that the likes of Outlast and BioShock instilled in me the first time I jumped into their worlds.

That’s what I’d been hoping for from Blair Witch, but as it is, it’s more of an easy, atmospheric adventure, rather than being the challenging, scary experience I’d somewhat expected.

The best way I can surmise it is this. I’m glad I played Blair Witch, but its shortcomings are noticeable and the lack of challenge really detracts from that sense of atmosphere and tense-ness that Black Hills Forest does so well to build.

If you’re in the market for a short adventure to tide you over for an evening or two ahead of September’s big releases and its atmospheric premise intrigues you, go right ahead. However, if you’re looking for the next smash-hit horror title, you’re best going elsewhere.

Should You Buy Blair Witch?

If you’re a fan of atmospheric titles and don’t mind a fairly action-less adventure, go right ahead. Puzzles and exploration are the order of the day here, with combat sprinkled in sparingly.

Blair Witch will release on Xbox One and PC on Friday, Aug. 30.

Blair Witch is developed by Bloober Team, the same team who worked on Observer and Layers of Fear 2.