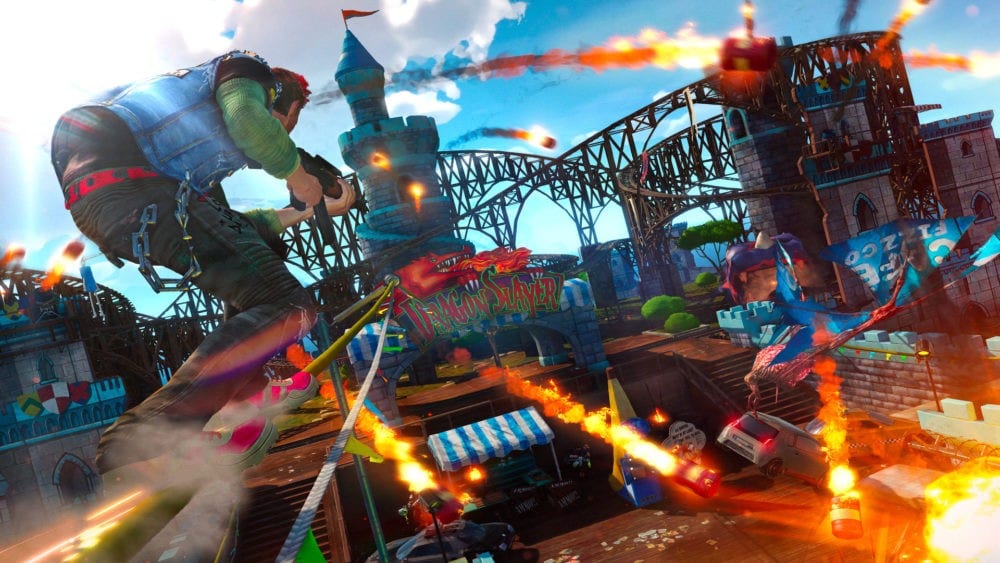 Arguably the most fun part of Sunset Overdrive is its over-the-top style. Whether it is the story, gameplay, or guns, everything about the game is wacky and entertaining.

While it may have set off to try and copy GTA at the outset of the series, Saints Row features that exact same entertaining wackiness.

In the fourth installment in the series, that statement couldn’t ring more true, as the leader of the Third Street Saints is now the leader of the free world. One day though, everyone is abducted by aliens and transported to a simulation of Steelport.

In this simulation, the already exaggerated action and gameplay is even crazier, as the main character and his allies are equipped with superhero-like powers and weapons.

This long list of powers and weapons is delightful enough of its own accord but gets even better when you can use them on aliens in weird missions. It isn’t every day you’ll see an alien dancing to a dubstep gun in a simulation, now is it?

While it has been around for longer, debuting in 2009, the Infamous series can certainly be described as Sunset Overdrive with superpowers.

Regardless of the game or character players control in the series, the gameplay is pretty much the same across the board.

Throughout each entry, unique skills and attributes can be added to the character’s arsenal.

Upgrades affect a myriad of gameplay, including allowing characters to shoot a more powerful or concentrated burst of power.

Moral decisions also play a large role in the game’s direction as well, as the story and powers that Cole and Destin can get vary depending on the path that is chosen.

Navigation can make or break any open-world game, as the gameplay between point A and B is just as important as what happens on the missions.

For Jet Set Radio, navigation is more than just a core aspect of the gameplay, it is the central focus.

In this rad action game, players control a young street gang member in a fictionalized version of Tokyo. This isn’t any normal gang though, as these youths use inline skating and graffiti tagging to express themselves.

The game consists of skating around the cell-shaded world, avoiding authorities, tagging spots, pulling off sick moves, and defeating rivals in competitions.

Comparisons between Jets\ Set Radio and Sunset Overdrive are pretty straightforward, as each contains fast-paced movements and navigation to go along with colorful, cartoony worlds and invigorating cast of characters.

Another title to feed your over-the-top powered needs, Prototype 2 is a game that revolves around shapeshifting and abnormal powers.

Using his shapeshifting abilities, James Heller can assume other lives after consuming people, inheriting their look, identity, and even memories afterward.

Combining this with the super mutant abilities that he got from the Blacklight virus, Heller looks to hunt down Alex Mercer: the first game’s protagonist and the one responsible for turning James into a monster.

Being able to turn into anyone at will, fly around the open world with ease, and use the tendrils on Heller’s arm to whip people around is just the chaotic fun Sunset Overdrive fans crave.

While the Sonic and pals property may be hit or miss nowadays in the entertainment industry, there was a time where games in the series broke boundaries.

Sonic Adventures 2 is one of those titles, as it is still talked about to this day as one of the best platformers of the last decade.

The Hero side is made up of Sonic, Tails, and Knuckles and the Dark side features Shadow, Doctor Eggman, and Rouge.

Campaigns – and the levels that make them up – are unique to each of the six character’s characteristics and abilities, featuring varied landscapes, objectives, and themes to go along with each.

Each story exists parallel to the other throughout the narrative, as the game switches between perspectives, with the Hero side looking to save the world and the Dark side trying to conquer it.

Alongside the platforming sections that make up each level and the unique final boss fights, Sonic Adventure 2 has plenty of side stories, missions, and collectibles to hold players attention, even today.

Looking for a game that offers just as many crazy guns and contraptions as Sunset Overdrive? How about trying out another beloved Insomniac Games developed series.

As the titular stars of the series, partners Ratchet (a feline-like humanoid mechanic) and Clank (a snarky, sentient robot) travel the cosmos, expelling evil from different universes with a handful of over-the-top weapons and gadgets.

Throughout the series, Ratchet and Clank games up the ante with new toys, ranging from weapons that can make people dance to ones that can change enemies into pixels.

Sunset Overdrive fans can likely thank this series for serving as a basis for all the creative ideas that came about in the game.

Video games that reward creativity are almost always a blast to play. For first-person shooter fans, there are few games more enjoyable and amusing than Bulletstorm.

In this profanity-laced shooter, the game transports you to a dystopian future, taking place in the 26th century, where the universe is run by the Confederation of Planets.

After they are tricked into killing an innocent reporter, protagonist Grayson Hunt and his elite black ops team, Dead Echo, desert and become space pirates.

Constantly on the run, the team engages in firefights with the man who set them up, Star General Earl Sarrano.

While the firearm variety may not be as varied as some games on this list, Bulletstorm’s Skillshot feature rewards players for killing opponents in creative and destructive ways.

Midair shots, environmental hazard kills, and so many more brutal kills are celebrated, lending to progression, allowing Hunt to gain better skills and weapons as a result.