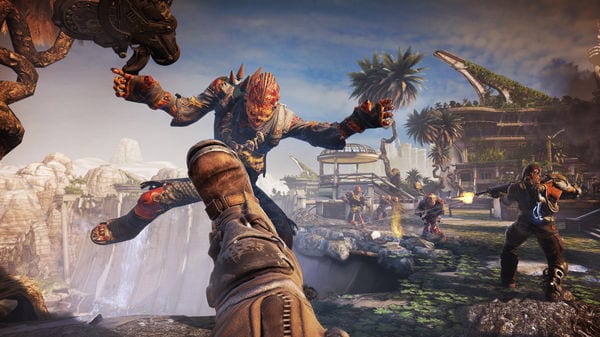 Bulletstorm is a curiosity as this title at first glance appears to be just another action game that had a very brief moment of success last generation only to be overshadowed by its competition. Yet, despite its flaws the game had fun moment to moment gameplay that allowed for a healthy amount of creativity in how players mangle, burn, bruise, and bloody every foe that crosses their path. Released back in 2011, Bulletstorm has been rather dormant since its debut despite ending on a rather alarming cliffhanger that never truly resolved. Now, nearly 7 years later, Bulletstorm has received a remastering for the current generation of consoles in hopes of making a glorious return. While the gameplay itself still remains fun, Bulletstorm: Full Clip Edition lacks any real appeal for returning players and the minor additional content doesn’t justify the $50 price tag.

For those who haven’t played Bulletstorm, players take control of Grayson Hunt who is a member of an elite task force that discovers they’ve been used by a manipulative general to kill innocent civilians. When the group finally catches up with their deranged leader, Grayson risks his team’s life by crashing his ship into the general’s battlecruiser thus stranding them on an abandoned resort planet. The catch is this resort planet is literally the worst place to live in the galaxy as its full of mutants, cannibals, dangerous wildlife, and tons of environmental hazards. Grayson must then reconcile with the remainder of his team, kill the general, and escape before the horrors lurking around every corner kill him.

While the story itself is kept to a minimum, your enjoyment of Bulletstorm: Full Clip Edition will depend on what kind of humor you find enjoyable. This is a game absolutely oozing with crude humor and it’s not shy about showing which can make for either an entertaining or cringeworthy experience. Personally, this was not my brand of humor but the actual jokes were blunt enough to induce a light chuckle or eye roll. Thankfully, the actual voice actors do an admirable job with the dialogue and you can tell they were having fun with bringing these characters to life.

Yet, once you look past the flurry of one liners it becomes increasingly clear that Bulletstorm doesn’t offer much in terms of a compelling story. There are a few good moments scattered throughout, but developers People Can Fly and Epic Games seem adamant at never letting this title have real emotional moments. This wouldn’t be an issue if the title focused on nothing but white knuckle action like say last years DOOM, but there is an attempt at real character development near the second half of the game. However, every time it feels like Bulletstorm wants to really dive into the emotional trauma of its characters it’s whisked away because we needed another sex joke. 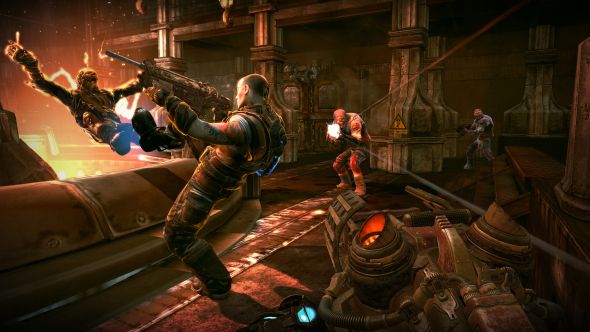 Though if you can look past this, Bulletstorm is a rather enjoyable title from a gameplay perspective as the combat focuses around sheer creativity. Grayson is equipped with an item called a Leash, which is an energy whip that can pull enemies towards him or launch them high into the air. When they’re pulled towards the player you can then boot them into environmental hazards, other foes, or just shoot them as they slowly fall to the ground. Given that some enemies can be rather resistant to bullets, tugging them in for a firm boot to the chest which sends them into a man-eating plant is both necessary and completely satisfying.

Where Bulletstorm thrives is when the player is presented with several different types of enemies, a plethora of hazards, and its powerful weapons. There is always more than one way to kill a target, which can make for some truly awe inspiring moments such as when I kicked an explosive barrel into a group of enemies that exploded and pinned them against the back wall. Along with your abilities, Grayson has access to several different weapons each of which have a “Charge Fire” that gives your gun some extra kick when activated. While you have your typical assortment of shotguns, snipers, and pistols Bulletstorm cleverly alters them just enough to add its own unique touch. Instead of simply sniping a target, players will actually take control of the bullet mid flight which can lead some seriously memorable shots.

Holding all to this together is a scoring system that rewards players with points for performing a variety of different kills such as kicking them into a cactus, throwing them into exposed wires, or cutting them in half via a shotgun blast. This encourages players to experiment and try new moves to build their score, which then can be used to purchase upgrades and ammo for your weapons. Players can then revisit certain areas via either  Chapter Select or a game mode called Echoes in order to build their score higher. It all works cohesively and adds a nice sense of progression as you go through Bulletstorm. 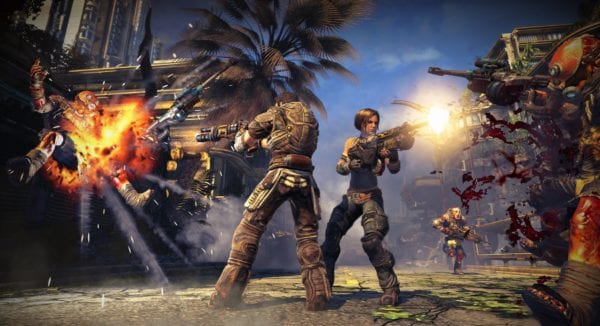 Visually Bulletstorm: Full Clip Edition looks decent, but not fantastic as the world itself is gorgeous but the character models did not age well. Everyone appears stiff in cutscenes and the actual visual designs for the enemies appear ripped from Mad Max concept art. There are better-looking games out there, but Bulletstorm never felt ugly or truly dated in terms of the actual graphics. During my playthrough, I experienced zero glitches, bugs, or hard crashes with only some wonky A.I. movements standing out.

However, the big selling point for Bulletstorm: Full Clip Edition is that players can actually swap out Grayson for the legendary Duke Nukem who is fully voiced in-game. The problem is, even after finishing the game on Normal this feature wasn’t unlocked and it became quickly apparent that it’s only avilable as a pre-order bonus. This means that the biggest selling point of buying this remastering is not avilable to those who pick it up at a later date. There isn’t a ton of extra content outside of a few single score attack missions and new game plus, so denying players the ability to use Duke Nukem is both puzzling and annoying.

Bulletstorm: Full Clip Edition is an action game that is fun in the moment, but is quickly forgettable thanks to a poor story, one-note characters, and mixed visuals. While the actual gameplay itself is incredibly enjoyable, there just isn’t enough new content to justify this game’s existence. While New Game Plus is fun, the fact that Duke Nukem (the only notable addition) is locked as a pre-order bonus is frustrating for a returning player. If you are new to this game there is still a lot of fun to be had, however, for those looking for a reason to return I cannot recommend this title as is. There is simply not enough new content to justify purchasing a title that is nearly 6 years old by now for $50. When it comes to Bulletstorm: Full Clip Edition, it unloads all its ammo and only ends up hitting some of the targets.