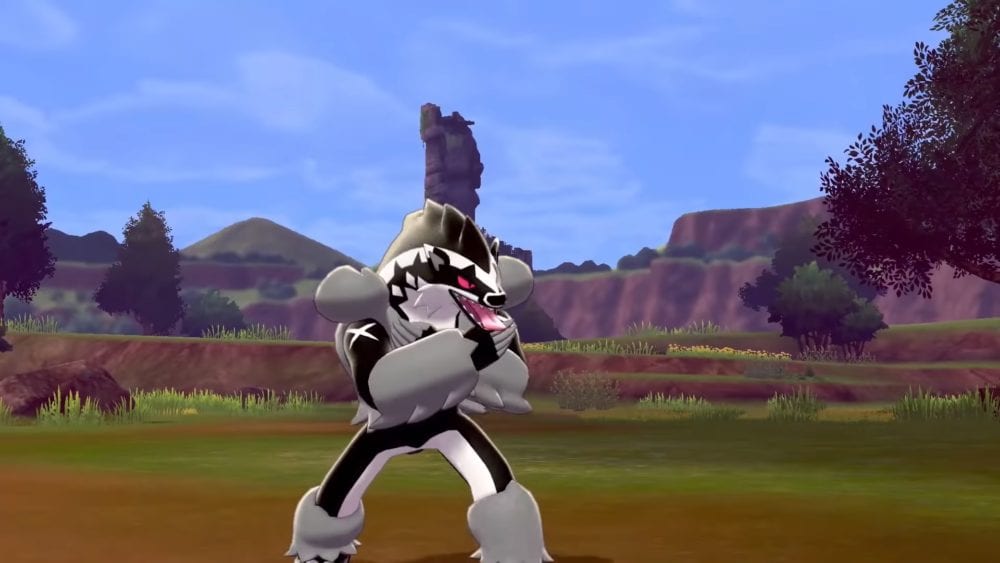 The Pokemon series features quite a few weaklings that evolve into living WMDs. Magikarp is the most popular example since it evolves into Gyrados, a Pokemon that tends to destroy seaside villages.

However, Pokemon like Magikarp make me ask why Game Freak hasn’t done anything noteworthy with Dunsparce.

Dunsparce looks like a fat snake with wings, and while it is based on a Japanese cryptid known as a tsuchinoko, the competitive Pokemon gamer community has ignored this Pokemon.

Dunsparce’s stats aren’t great, and it was introduced in Gen II, right after the seemingly useless Magikarp blew gamers minds, so one can’t help but be disappointed by the flighty snake.

However, all is not lost for Dunsparce.

Many gamers have invented their own fake evolutions (my personal favorite is Dunseraph from Pokémon Uranium), but since Pokémon Sword/Shield is inspired by the UK, a Galarian Dunsparce and its evolution could ideally take cues from an unlikely but popular English piece of fantasy: dragons.

When most gamers hear the word dragon, they tend to think about six-limbed, fire-breathing monsters who kidnap princesses and hoard gold.

However, British legends are full of stories about dragons that look decidedly more serpentine, including the Lindworm, which is just a snake with legs, and the Amphithere, a snake with wings (hint hint).

Some dragons are nothing more than overgrown snakes and are called wurms (sometimes spelled wyrms).

Any one of these dragons would make for a good Dunsparce evolution. It already has vestigial wings and the snake-like body; an evolution would just dial the existing features up to eleven and maybe add in a proper Dragon typing.

I’m cheating a bit here since Eevee doesn’t need a Galarian form, but admit it: we need more eeveelutions.

With one exception, Game Freak adds new eeveelutions every other Generation, and Pokémon Sword and Shield will mark Gen VIII.

Since no new eeveelutions were introduced in Gen VII, I will be surprised if Eevee doesn’t receive a new evolution, such as a Ghost-type evolution called Wispeon or a Steel-type named Goldeon (dear Arceus, I love poképuns).

Trevenant are basically the Poison Ivy (as in the DC supervillain) of the Pokémon kingdom. They can control other plants (mostly trees) and literally curse anyone who harms plants.

However, that raises the question of how Trevenant treats people who worship nature, especially plants and trees.

In the UK and other European countries, May Day is a long-running holiday with roots (pun intended) in pagan religion. The traditional holiday celebrates fertility and the changing seasons, and the maypole is a constant feature in May Day festivities.

People dance around the pole in a rite that supposedly ensures fertility.

Imagine, if you will, a benevolent Galarian Trevenant that makes flowers bloom instead of trapping lumberjacks in forests.

Also, imagine this Trevenant evolving into a sentient maypole that attracts Grass-type Pokemon and/or strengthens Grass-type moves. The metagame would be insane.

What do you see when you look at a Kabutops? A sea scorpion? The grim reaper of horseshoe crabs? I see a Tyranid.

For those of you who never heard of Tyranids, they’re a fictional alien species from Warhammer 40K that, thanks to rapid self-evolution and insane reproduction rates, conquer and consume entire planets in two months flat.

Even though they can sport obscene mutations such as literal handguns and grappling hook tongues, all Tyranids feature six limbs, hooves, a xenomorph-like head, and arm scythes.

In other words, the average Tyranid bears more than a passing resemblance to a Kabutops.

Since Kabutops already look like Tyranids, a Galarian Kabutops that sports Leviathan Hive Fleet colors (i.e., white with purple highlights) and an extra-thick carapace seems like a no-brainer.

After all, the Galar region is based on the UK, and Warhammer 40K is made by Games Workshop, a company that started in London.

Add an evolution that expands Kabutops’ head and turns its scythes into massive weapons that require two extra arms for support, and you have the ultimate reference to the UK’s most popular game company.

The UK is full of legends that serve as inspiration for Pokémon. Excalibur and the Loch Ness Monster, for example, are the obvious influence for Aegislash and Lapras.

However, the UK has quite a few more obscure legends begging to be Pokemon-ified, especially tales of ghostly black dogs.

If you threw a dart at a map of the UK, it would probably land on a region that has an ancient story of a supernatural canine.

Some samples include the Barghests of Yorkshire and Wakefield’s Padfoot, and while these animals are all black ghost dogs, their personalities are varied.

Hairy Jack of Lincolnshire, for instance, is extremely aggressive, while the Gurt Dog from Somerset is surprisingly friendly. And then there’s East Anglia’s Black Shuck, who is portrayed as both a good boy and a rabid killer with a giant, cyclopean eye.

If you’re like me, these ghostly dogs probably reminded you of Lycanroc. Depending on when a Rockruff evolves, the resulting Lycanroc will look and behave very differently.

Its Midday Form resembles a wolf and avoids fights; its Midnight Form looks like a werewolf and loves to brawl, and its Dusk Form is a mix of the other two forms.

While Lycanroc was introduced in Gen VII, it deserves a Galarian form that takes advantage of the UK’s ghostly black dog myths since they are as varied as Lycanrock itself.

And, of course, each form would evolve into a distinctly different Pokémon inspired by the UK’s various ghost dogs. Who wouldn’t want a Rock/Ghost wolf Pokémon?

Bug-type Pokemon, in general, are weak.

They have low HP, and their attacks aren’t very effective against many Pokémon types. There are some exceptions, such as Volcarona, Pinsir, and Genesect; but they are the exceptions that prove the rule.

It’s about time Game Freak gave Bug-types a sizable buff, and the company can start with the face of Bug-type mediocrity.

You probably forgot about Kricketot and Kricketune. These Pokémon look like the unholy union between a cricket and a violin; their stats are low even for Bug-types, and they use numerous sound-based attacks that become useless when fighting Pokémon with the ability Soundproof.

A Galarian variant of Kricketot and Kricketune that comes with a new secondary type and an evolution, however, could give these frail Pokémon a fighting chance.

You might wonder how to alter a music-themed insect to fit into a UK-themed region.

Well, since the Galarian Zigzagoon, Linoone, and new Obstagoon look like rock stars, why not make Kricketot and Kricketune (and their hypothetical evolution) reference the most famous British rock stars ever: The Beatles?

Granted, Kricketot and Kricketune are supposed to be crickets, not beetles, but turning insectoid violins into electric guitars is too good an opportunity to pass up.

Just solidify the allusion with a new, powerful evolution that references Sargent Pepper’s Lonely Hearts Club Band, and the Kricketot line could be the spotlight of future Pokémon competitions.

Sudowoodo is the definition of a gimmick Pokemon. This Rock-type Pokemon loves to mimic trees and block players’ paths. However, after twenty years of the same old shtick, it’s time this Pokemon tried something new. Sort of.

I’m not saying Sudowoodo should stop its mimic act, just that it should mimic something other than trees. If the trailers are any indication, Pokémon Sword/Shield’s Galar Region is littered with Stonehenge-like rocks.

Perhaps Galarian Sudowoodo (and their pre-evolution Bonsly) could mimic those fancy boulders and move when players aren’t looking.

Of course, if a Galarian Sudowoodo were to mimic those not-Stonehenge rocks, its evolution should go one step further and mimic an entire Stonehenge-like structure.

Its Pokédex entry could even reference stories of wanderers who fell asleep in what they thought were rock circles and woke up in an empty field. Nothing like a fresh coat of paint and a regional evolution to make an old gimmick Pokemon feel new.

From a design standpoint, Drifloon and Drifblim are absolutely bonkers. They’re sentient balloons that kidnap people and take them to the afterlife.

Originally, they weren’t good combatants, but they’ve turned the competitive scene on its head thanks to their Unburden ability and Gen VII’s seeds. So, Game Freak, let’s keep the ball rolling, shall we?

I’m going to be blunt: Galarian Drifblim should be Steel/Ghost so they can evolve into a metal ghost zeppelin, or should I say a literal lead zeppelin.

Yes, I want Drifblim to receive a Galarian evolution for the sake of a pun revolving around a 60s metal band from London, but that’s not all.

Normal Drifblim sport more health than any other Ghost-type Pokémon save for Giratina, but a Galarian Drifblim (and its evolution) would have even more health, as well as increased defenses because it’s half Steel-type.

Basically, it would become a flying ghost tank, which is probably the most metal idea since Iron Maiden.

While I would prefer if the vanilla Jynx could evolve, I will settle for a Galarian Jynx and an evolution unique to that regional variant to help it catch up with its compatriots.

Now, Jynx’s controversial history is no secret. After all, Jynx’s original black skin was changed as it looked like blackface, so a Galarian Jynx would be the perfect opportunity for Game Freak to wipe Jynx’s slate clean.

However, the question remains what a Galarian Jynx and its evolution would look like. Since Galar is on a UK kick, a Galarian Jynx would probably keep its Ice typing and adopt a decidedly Viking appearance.

Sure, Vikings are Norse, but they invaded the British Isles on and off again for three centuries, so Vikings are an important part of British history.

Given Jynx’s rotund shape, this hypothetical Galarian variant (and/or its evolution) would look similar to the iconic Fat Lady from Richard Wagner’s opera about Norse Gods, The Ring of the Nibelung.

The opera might be German, but the Fat Lady plays the valkyrie Brunhilda, and Jynx are known to speak in an incomprehensible language. What if they were reciting a German opera this entire time? Food for thought.

While Pokémon Sword/Shield’s Galarian variants are the talk of the town, the games will feature quite a few new Pokémon, including the electric doggo Yamper and a Pokémon made out of coal known as Rolycoly.

But wait, doesn’t Torkoal eat coal? Perhaps this situation is the perfect opportunity to invent a Galarian variant that demonstrates a mechanism of evolution in the real world: adaptation.

Since Torkoal digs through mountains in search of coal, they probably would jump for joy if they found giant, rolling lumps of coal just sitting in a cave, waiting to be eaten.

Easy prey, a Torkoal would think, at least until the Rolycoly KOs the Torkoal —Rolycoly are Rock-types, and Torkoals are Fire-types.

To effectively hunt Rolycoly, Galarian Torkoal would probably adapt an additional type that is resistant to Rock-type moves, such as Ground or Steel. But not Fighting-type; we have too many Fire/Fighting Pokémon.

And, to further the edutainment lesson on real-world evolution, Galarian Torkoal could evolve into a new form that learns moves that are super-effective against Rolycoly and other Rock-type Pokémon.

For once, Pokemon evolution could actually resemble real-world evolution, and in a region based on Charles Darwin’s home country, no less.