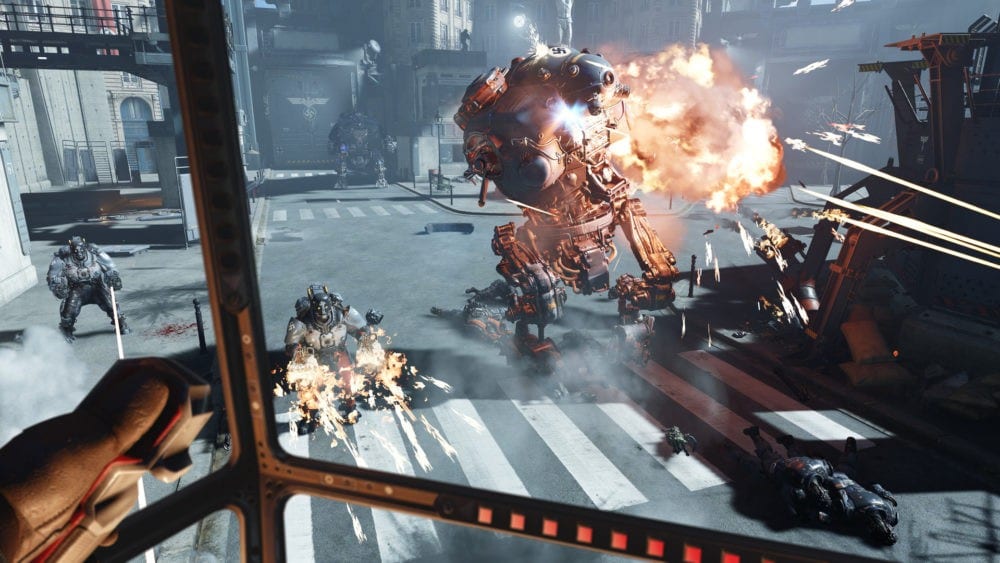 To tie in with the release of the new co-op Wolfenstein spin-off Youngblood, Bethesda has continued their trend of releasing VR titles for many of their popular franchises with the launch of Wolfenstein Cyberpilot.

Before Cyberpilot, Skyrim had been ported in its entirety to VR, becoming one of the most popular games for the medium, and Doom VFR allowed you to get up close and personal with the brutal demon-slaying.

Unfortunately, though, Cyberpilot doesn’t live up to the quality of Bethesda’s other VR titles, seeming more like a brief proof of concept demo that’s had the Wolfenstein name slapped on it to give it some brand recognition.

The premise is simple. You’re a robot of some kind that has been recruited by the resistance to pilot hacked Nazi machinery from a booth in their base. Essentially, your character is playing a glorified light gun game.

The action is split up into just four missions –one for each of the three robot types you pilot, and one in which you switch between the three.

There’s the Panzerhund (the giant robot dog), the Drone, and the Zitadelle (a hulking robot that fires missiles), and you get one mission with each to get to grips with them and blast some Nazis.

It’s mindless fun, for the most part; the Drone being the standout due to the freedom you get vertically. Using the other two feels more like playing an on-rails shooter as you slowly walk between the streets in 1980s Paris (the only link to Youngblood) taking on a few bad guys before moving on.

Each robot has a few skills you can take advantage of. The Panzerhund can launch itself through groups of bad guys, the Zitadelle can launch a pulse when in trouble, and the Drone can activate an invisibility skill that lets you sneak past roaming Nazi henchmen.

The shooting actually feels satisfying too, allowing you to blast generic soldiers away with one shot, and being moved between the three robot types keeps you from becoming bored of any one in particular. It’s nothing special, but enjoyable enough for half an hour or so. 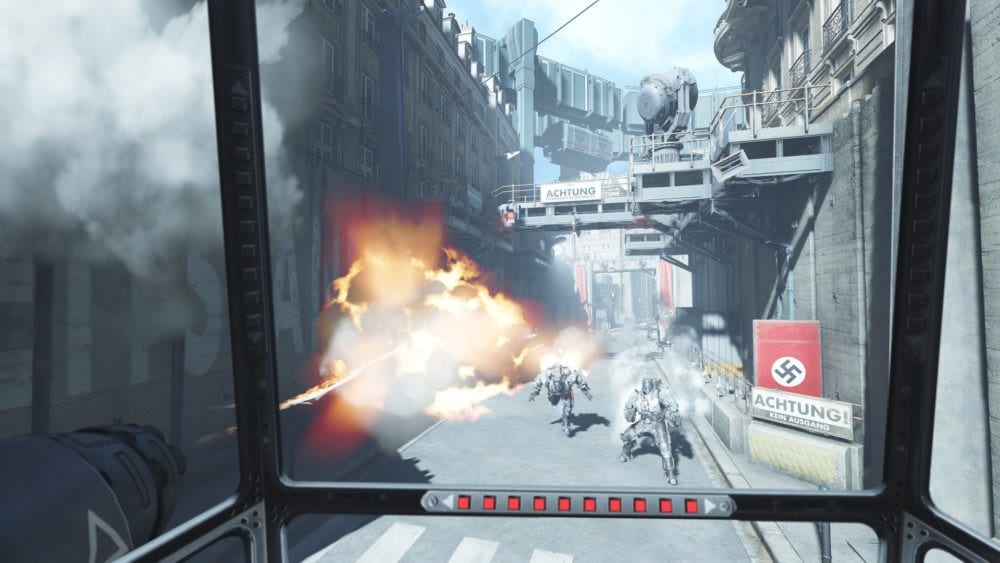 Thing is, you wouldn’t be able to spend much more than 30 minutes with the game even if you wanted to.

After the introduction to each device you pilot, you’re launched into an assault on Brother 3, one of the Nazi bases in Youngblood, and you need to switch between each of them to progress.

At the end of that mission, though, just as the game seems to be starting, that’s it, you’ve won, and the credits roll. The final mission even ends before it has a chance to get going. Once the credits started, I was sat with my arms outstretched, questioning whether it really was the end.

Cyberpilot lasts about 90 minutes, maximum, and about 70 minutes of that feels like a tutorial. Even as a demo for a full game you could buy, it would be underwhelming.

It’s made worse by tedious sections between the action. For the entire game, you’re strapped into a chair that you can move between a building’s four floors with a lever on your left.

The bottom floor is where you look at the machines you’ll be piloting and you need to replace a chip in each one before the mission focused on it begins. There’s also an office room and place where you can try to awkwardly throw a plastic toy into a trash can.

The tasks are mundane, making you want to just ignore it all and jump back into the action, but it’s made worse by the controls. The shooting is controlled by two devices you pick up in the game, one in each hand, to make it feel natural using a Dualshock 4.

However, that hasn’t been altered for the sections between the action. You’ll need to pick things up, reach for switches, and line up components to fit them together, but your character’s hands don’t move independently of each other.

Your hands move in the same way as they do on the controller. As you move your own right hand down, your left goes up. It’s as if you’re holding an invisible ball in your hands and moving it around.

This makes doing anything that requires any precision really difficult, however. Also, since controller tracking is done via the Dualshock 4’s lightbar, rotating the controller too far to get your in-game hands in the right position makes the camera lose track, seeing your hands glitch out in-game just as you’re about to grab what you need.

It’s really frustrating and just feels like unnecessary padding in what is a short game anyway. Taking out the connecting scenes, there’s less than an hour of action to play in Wolfenstein Cyberpilot. Even at a budget price, it’s just not worth it.

The lack of content is disappointing because Cyberpilot clearly has potential. With more variety in the action, or just more action in general, and story that brings it closer to the Wolfenstein world, it could have been a good spin-off. 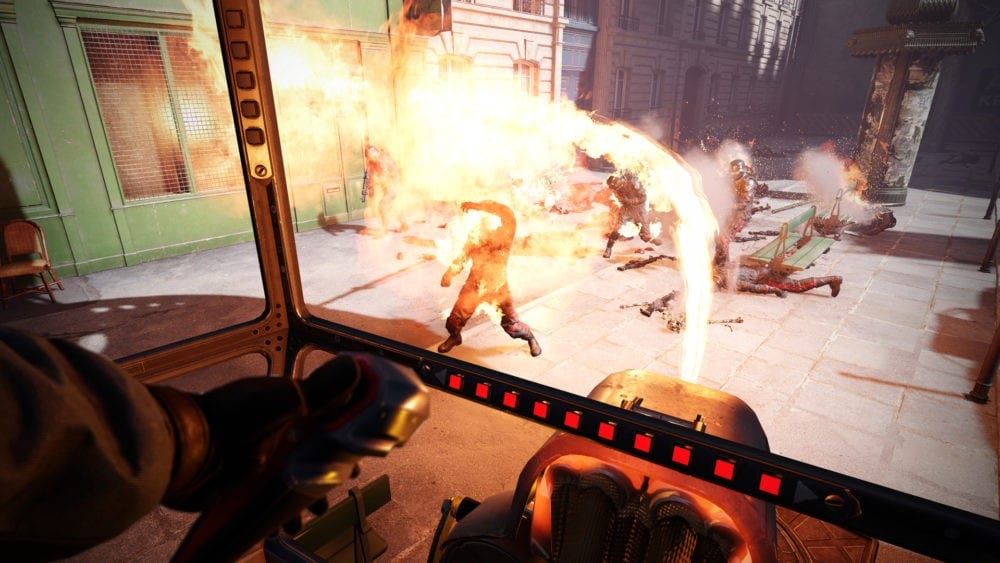 From a technical standpoint, Cyberpilot is one of the most impressive games on PlayStation VR. Visually, the world looks great. Levels that take place inside are well detailed, but it’s the more open, outside areas that catch the eye.

Looking up at a giant Nazi war base from a lonely machine with the crumbling streets around you is quite a sight, and it’s clear that much of the design of Youngblood has made its way over. It’s just disappointing that you don’t get to see much of the world that’s always been the Wolfenstein series’ main draw.

Aside from the themes present in the world though, Cyberpilot doesn’t feel like a Wolfenstein game. As I alluded to before, it feels more like a concept demo with the Wolfenstein name tacked on.

Part of that is due to the speed of classic Wolfenstein gameplay being replaced by the three machines, but other things that you’d expect are missing too. It’s missing the storytelling and characters of the mainline series. In fact, there aren’t really any other characters other than your handler to speak of at all.

The signature over the top violence is strangely absent, too. The exploding limbs, the ability to evaporate Nazis with futuristic weapons, and caricature bad buys are nowhere to be seen.

Were it not for the occasional swastika, vague links to the Youngblood world, and the logo on the box, you’d have no idea that Cyberpilot was a Wolfenstein game.

Aside from some brief fun to be had with the three machines, Wolfenstein Cyberpilot is hugely disappointing. What could have been a perfect way of getting a different perspective on Wolfenstein’s world is actually a tedious action game with a severe lack of content and none of what makes the series great.