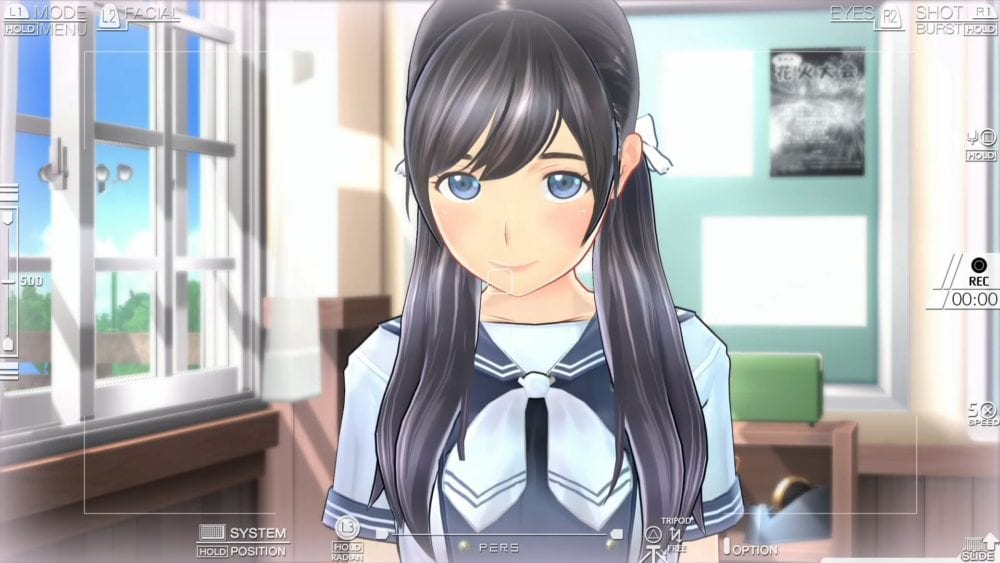 The Japanese release for PS4 of the “pure love” simulation LoveR by Kadokawa Games marks the return of popular Producer Ichiro Sugiyama after more than four years since the release of Reco Love.

Sugiyama-san is well known for creating games with strong romantic stories and charming characters, which have earned themselves a sizable fanbase in Japan.

In order to learn more about the game, we went straight to the source and talked directly to Sugiyama-san and to Overseas Business Developer, Juntaro Kouno at Kadokawa Games’ headquarters in Tokyo.

Giuseppe: How did the Japanese audience receive LoveR? I keep seeing many screenshots shared on social media.

Ichiro Sugiyama: I’d like to thank those who waited for the game since it took a long time. We have received an enthusiastic reception from our fans, as this is a completely new romance simulation title for PlayStation 4.

We’re having a series of photo contests that we call “PhotoCon.” Thanks to all of our fans we reached our third contest and received more than 3,000 photoshoots. So yes, the reception was great.

Giuseppe: Do you have a personal favorite among the heroines of LoveR?

Ichiro Sugiyama: to be honest, I like them all. I have put so much effort into creating each unique girl. The same goes for the rest of the staff since they worked so hard on all of them. It’s really difficult for me to pick one.

Giuseppe: Your games always have a very strong focus on romance. What inspires you to keep pursuing this topic?

Ichiro Sugiyama: I’ve been writing romantic stories for 23 years. To be honest, I never thought my life would be like this. I had envisioned something else. Yet, here I am creating another love story after 23 years.

I’m actually very thankful for being able to create love stories. It was ten years ago that I finally realized that this was really my calling. I accepted that reality, so here I am.

Way back, over ten years ago, I tried to create a different kind of game, but my boss didn’t allow that. He told me I should just make another romantic game, and that he wouldn’t greenlight any project of mine unless it was a love story. That’s a funny story, thinking back about it.

Giuseppe: Minoboshi Taro is another well-known name among those who love romantic games. How was working with him on LoveR?

Ichiro Sugiyama: We have really great chemistry and we worked very closely. Minoboshi-sensei was mainly in charge of character designs and illustrations.

While I was writing the text for the characters, Miniboshi-sensei would add his own touch and ideas. This blend between our creativities was then reflected in the visuals of the game. We both love this genre, so it worked out beautifully.

Giuseppe: Photography is another recurring topic. Is there any specific reason for that?

I realized that over the past few decades the audience accepted 3D characters as an object of romantic interest, and before then it was 2D. My challenge was to incorporate the ability to take pictures from a 360 degrees perspective.

Giuseppe: Is there any chance that LoveR could come to other platforms, like the Switch or PC?

Juntaro Kouno: We are considering this as just one business potential. Here in Japan, love simulation games have decreased a bit in numbers, but it could be a chance for developers like us to introduce the game in the overseas market, and especially in the west.

It would be the first time for Sugiyama-sensei to release one of his games overseas. While the possibility exists, but we’re still considering it for now. There needs to be a lot of internal discussion within the company before we can take a decision. To put it down simply, the final decision has not been taken yet, but we are considering it.

Giuseppe: Do you think there are good chances that it’ll happen?

Juntaro Kouno: We hope so. We already announced the release in Asia. The west would be the next natural step, and we hope it’ll happen.

Giuseppe: Are there any challenges in localizing LoveR for the western market? And if yes, how are you planning to overcome them?

Ichiro Sugiyama: The game is entirely about true and pure love. It’s about holding hands and those things we all have fond memories about from our youth. The only thing I’m concerned about is whether the west will accept our ideas or not. This is not a AAA game, and all we’d simply like for those who buy it to enjoy pure and true love.

Juntaro Kouno: Of course, we’d like to bring this game to the west, but to do so we’d have to internally discuss and ask ourselves if we can actually release it, and if we should release it. We have to examine the content and the story of the game carefully.

One thing is for sure: We want to release LoveR as it originally was created, without any changes. If we were required to modify or alter it in any way, then the option we’d have to consider would be not to release the game in the west at all.

Giuseppe: I’ve heard quite a few fans expressing appreciation for Himari Saiki. Have you ever considered adding a route dedicated to her, maybe as DLC? I know I’d be happy to play it.

Ichiro Sugiyama: Originally, she was included in the story as a character available for romance. She also is the only one wearing glasses, which makes her quite special, and she is appreciated by the fans. I really wanted to add her, but it didn’t happen for now. Yet, I really would like to somehow include her in the next story or scenario. It’s a possibility.

Giuseppe: Your games have been translated into anime in the past. Would you like to see the same happen to LoveR, and do you think there is any chance that it’ll happen?

Ichiro Sugiyama: I’m not the kind of producer who also works on anime. I’m purely into creating games. I don’t aggressively pursue the conversion of my games into animation either. Yet, if there is an offer from an animation producer or director out there, I’d love to collaborate with them. That being said, there are no plans like that for now.

Giuseppe: Do you already have any plans for your next game?

Ichiro Sugiyama: At this point, I’m involved in the overall management and operation of LoveR, including the bi-weekly release of new costumes. We’re working hard to keep our existing fans interested in the game with new content, and also to bring new fans into the fold. On top of that, we’re releasing content for our Virtual YouTuber.

Giuseppe: Do you have any message for your western fans?

Ichiro Sugiyama: I would like to thank every gamer who appreciated my games in the past and is looking forward to LoveR and maybe my future games as well. I and Kadokawa Games will work hard to try to deliver LoveR in the hands of those who are waiting for it.

LoveR is currently available in Japan exclusively for PS4.