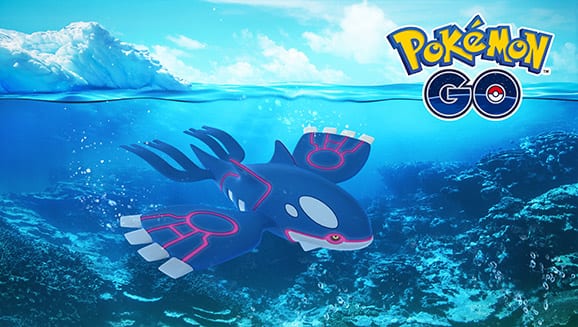 Please, welcome the best Water-type back to raids in Pokemon GO. Kyogre has made its triumphant return to legendary raids, but you only have just over one week until Groudon replaces the sea beast on June 27. The Sea Basin Pokemon packs a vicious punch, so you’ll want to get at least a few of these Pokemon if you didn’t get enough the first time it was in raids. Here are all the details you need to be successful in catching and raiding Kyogre.

How to Get Kyogre

You better have an active raid scene near you, or you’ll be out of luck. There have been reports of trainers being able to take on Kyogre with a party of just three people, however, that seems incredibly unlikely since there just aren’t many strong counters for this raid in Pokemon GO that can withstand this legendary Pokemon’s Blizzard attack.

Your best bet for victory in this raid will be with a team of four high-level trainers that have optimal counters, or five decently strong trainers with good counters. Just be smart because Kyogre can easily wipe out your team, so get your revives ready. This will be a tough one.

The first time Kyogre was in Pokemon GO raids we didn’t have the Electric juggernauts Electivire and  Magnezone to choose from. Electivire won’t resist Blizzard, but at least Magnezone’s advantage over Ice-types will make it a sold option. The Electric/Steel Pokemon is the safest option for those who fear Kyogre’s Blizzard move.

Let’s not forget the grass types that were so useful against Kyogre the first time around. Well, as long as the raid boss has Thunder or Hydro Pump, then grass types are a good choice. Pitting a Grass Pokemon up against a Kyogre with Blizzard is essentially a suicide mission.

Here are some of the best options for taking on Kyogre:

Although it has Blizzard and Thunder at its disposal, you’ll usually want to use it as a water attacker. We live in a crazy world where Mewtwo is one of the best Ice attackers in the game — and was the best until Mamoswine — so it’s not a completely ridiculous idea to set up Kyogre as a dragon killer. Still, the Water category is where this Pokemon will shine.

Even though Water-type attackers for raids are not uncommon, none come close to matching the power of Kyogre. The closest Water-types, Gyarados and Sharpedo, are good, but their secondary types add weaknesses that can become liabilities in raid battles.

The biggest knock against Kyogre as a surefire Pokemon GO raid master is its rarity. Since they can only be caught in legendary raids, it’ll be hard to get enough candies to raise it to level 40.

Kyogre’s Pokemon GO moveset is exactly what you would expect from a legendary Pokemon. There are no frills, it’s just straight overwhelming power. You only need one quick move with this beast, and that’s all you get. Here is Kyogre’s quick move:

The charge moves you have to choose from for this big blue dude are even better than the single quick option. Of course, you can give Kyogre another strong Water move, but it also has a few other tricks to cover its weaknesses. Here are Kyogre’s charge moves:

The stats on this Pokemon would make it a solid gym defender, but there are no legendaries allowed in gyms. However, its rock-solid defense and abundant HP allow Kyogre to take a massive beating for a long time. This will allow you to use numerous Hydro Pumps per raid without needing to worry too much about fainting. Here are it’s base stats:

That does it for everything you need to know about Kyogre’s raid, stats, and moveset. If you’re looking forward to the legendary raid for next month, get a preview with this Groudon Raid Guide.