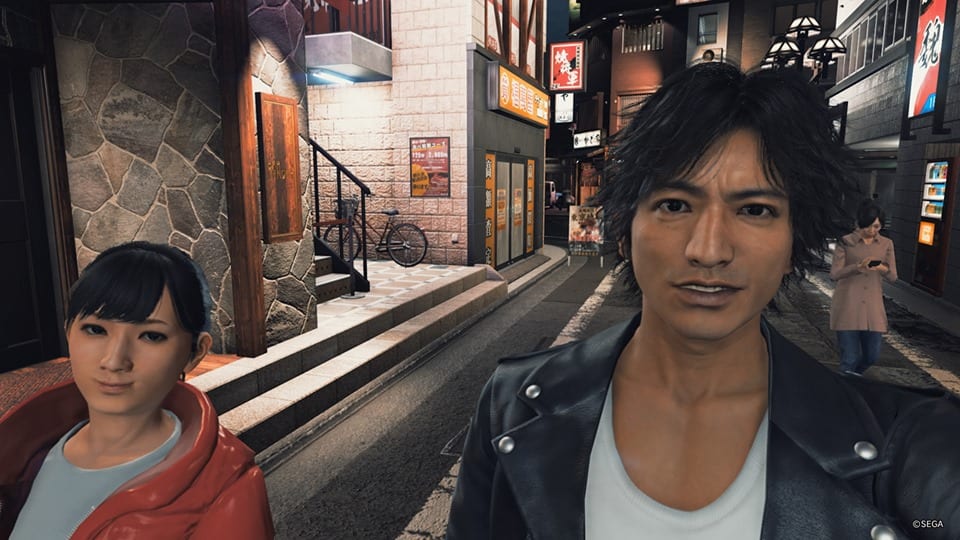 The Yakuza series has always had a fascinating way of doing open world design, and in fact, I’m almost a bit remiss to even call Yakzuza open world. The entire series, for the most part, takes place in the singular city of Kamurocho, changing and evolving the city across multiple entries and decades.

Judgment also takes place within Kamurocho, and there’s one particular feature that makes the city feel more alive than it ever has been before, and even more alive than most open world games I’ve played.

The Friendship System in Judgment does exactly what it sounds like, letting you become “friends” with 50 different people living in the city of Kamurocho.

Circling back to what I said before, Kamurocho isn’t a full open world in the way you typically think of. It’s a smaller, contained zone and not one that lets you roam free and explore.

Rather, Kamurocho grows and evolves across any given game, as districts change, new side cases open up, and you learn even more about the city.

Judgment is the absolute best example of fleshing out Kamurocho and making it feel like a legitimate city. Throughout the game, you’ll see little handshake icons pop up on the map menu, with each one representing a different friend event.

You can, obviously, seek these out on your own, but they’re organically woven into the game that you’ll discover quite a few just by playing normally.

Judgment smartly weaves a bit of side content into the main story, teaching players how to look for friend events and start Side Cases. Most of it is still optional, but the game teaches you about it, and everything is paced better than your typical Yakuza game.

These Friend Events are often hilarious and charming, and there’s a variety of ways to make friends.

Sometimes you just need to talk to them, like going back to the same restaurant and helping two workers get the confidence to go on a date, other times you’ll need to meet certain requirements, like beating all of the courses at the batting cage to make Yoshida, the owner, appear.

Through these events you learn more about the people living in Kamurocho, and they also help flesh out Yagami as a character, providing extra edges to him outside of the super dramatic main story.

Outside of learning more about the people, you see more of Kamurocho itself. You see how citizens react to things, you see new places, how the police interact with the city, and how shop owners interact with it.

Past just getting more context and story details, Friend Events are highly functional on a gameplay level as well. Certain Friend Events will open up the opportunity to meet new friends, and each time you max out a Friendship Gauge you gain one city reputation level.

As this level rises you’ll unlock more Side Cases, which in turn, lead to rewards and the opportunity for even more friends. The friends you make will also interact with you.

They’ll greet you out on the street, giving you a little increase to your EX Gauge, give you discounts at stores, they’ll offer unique services like acupuncture that can restore your health and EX, and a handful of friends will even jump into battle with you when you get ambushed by thugs on the street.

Nearly every friend in Judgment has some kind of unique function that adds to or enhances your gameplay experience, on top of getting story and fun dialogue.

The friendship feature ties into nearly every aspect of the game, really making Kamurocho feel like a living, breathing community; one that Yagami is inexplicably tied to.

Yakuza has been telling the stories of the same characters for years now, and they’re incredibly loved by fans. In a way characters like Kiryu and Majima are irreplaceable, and Judgment had a tall order being a brand new IP that didn’t feature these beloved characters in any way.

Yagami needed to be a well-defined, likable character, and clearly, Ryu Ga Gotoku Studio was trying to find ways of doing that. In our interview with the game’s producer, Kazuki Hosokawa, we asked about the inspiration behind the friendship system. Hosokawa-san told us,

“The friendship event actually developed when we were thinking about how to solidify the character of Yagami, and that comes from, because he lives in Kamurocho as a resident, and interacting with the townspeople that are also living in Kamurocho gives Yagami a much deeper character.

You know Kamurocho is his home ground for Yagami, and that aspect also gives Yagami depth, and that’s where the friendship events come from.”

This all makes sense within the context of Judgment, and the friendship system honestly feels like the most experimental thing the studio has done over their last few games.

Obviously, it’s a gamble that paid off fantastically, and during my 60-hour playtime with Judgment, the friendship system kept driving me forward to see every little bit of side content I could.

Of course, fantastic writing and localization go a long way to help with this, and so many of the stories that you see pop up are heartfelt and genuine.

There’s a young girl trying to pay her way through college by working at a sexy club that you help, there’s a mystery writer disillusioned with the publishing industry, a restaurant owner trying to figure out how to keep his business from going under.

Of course, these are propped up against more ridiculous ones, like an American Ninja who makes a lot of, well, Naruto references.

Judgment is a great game just on its face, and one of the best stories that RGG has told yet, but it’s the Friendship system that really drew me in and made me love it.

I’ve spent literally hundreds of hours in Kamurocho across a handful of games, and yet, my time in Judgment felt entirely unique. That’s an achievement in and of itself.