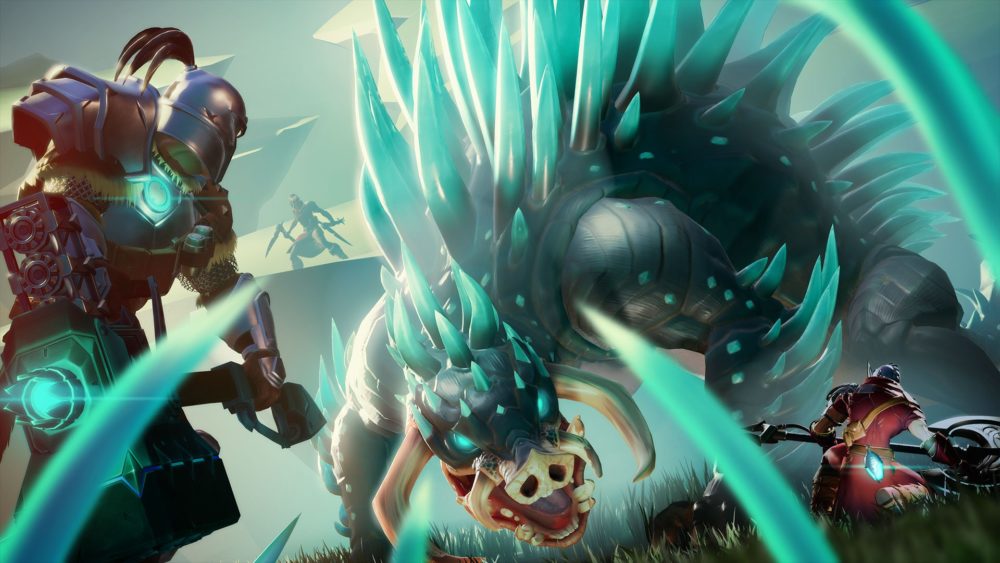 After being a PC exclusive for some time now, Phoenix Labs’ newest action-RPG, Dauntless, has made its way to consoles and, in a world that already has Monster Hunter: World, it seems to be a different take on the monster-hunting genre.

But I’m no fool and although Dauntless looks different from Monster Hunter, it’s essentially a free-to-play clone of it, following a similar gameplay loop that works the same, more or less.

Once you log into the Dauntless server, you will have the opportunity to customize your character with some pretty basic options and then you’re thrust into the main hub of the game where you will be spending about 40% of your time.

This hub doesn’t do anything that exciting, to be honest. You have the NPCs there and menus to go through, but there aren’t any activities or anything fun to do. You can walk around the town with your party and play around with the emotes and such, but that’s pretty much it.

From there, you can see other players that are online and meet up with friends who you invite into your party. In this same hub, you’re able to perform a multitude of actions such as craft new weapons and armor, and most importantly, start a hunting quest from the job board.

You only get a few options at the start, but once you progress a little bit further, you gain access to a selection of monster battles to jump into that are all split up by elemental type.

Keep in mind that these monsters aren’t the most visually appealing beasts, as most of them have familiar physical traits, but the actual behavior of their attacks differ from one another, and learning their movements and “tells” is something to focus on while grinding for materials.

You have frost monsters, electric monsters, flame monsters, and a few more that fit into other elemental type categories. It basically works like Pokemon and makes it easy to figure out what type of weapon/armor that you should bring with you on a hunt.

There is a fair amount of weapon variety in Dauntless. There are six different weapons to choose from and they all offer moderately different gameplay experiences that spice up battles if you’re getting bored with your favorites.

There are quick swords that you can use that are fantastic for beginners as they deal pretty good damage while also letting you move around fast, and there are others, like hammers, that are very powerful and great for staggering, but make you move slower.

The combat is flashy and enjoyable and it’s also very easy to get the hang of. This makes it very easy for monster-hunting newbies to get in on the action.

You have light/heavy attacks, you can roll out of harm’s way, and you can jump. By using just a few buttons, you can easily take down the beginner monsters, but once you get into the nitty-gritty, you then have to be more cautious of all your skills and the mods on your equipment.

If you wanted to queue to fight the Flame Behemoth Embermane for example, Dauntless will tell you what type of equipment to bring and it will also let you know if your equipment is strong enough to take on the monster.

Taking advantage of this system is very satisfying and punishing a Frost Behemoth with my flaming sword never got old. Having the right weapon is crucial to battle, and I really liked how Dauntless helps prepare you with intel prior to the hunt.

Perhaps it was thanks to this intel that I never died in the first few hours of playing, but once I started going up against the higher-leveled creatures, my party of pick up players started dropping like flies.

At first, I came up with the notion that the game was super easy and accessible for other players, but the challenge ramps up rather quickly, making for some pretty exhilarating fights and fun trips back to town to craft new equipment with my trophies.

Making sure that you keep your equipment up to date is crucial for surviving these tougher encounters. This is pretty much the entire loop of Dauntless and it should be familiar to fans of similar games.

It can get a bit grindy working towards a specific item or two, but if you play around with the different weapons and special powers you’ll wring out some more replay value and entertainment. It’s something that I’m used to as someone who has played over 300 hours of Monster Hunter throughout the entire series.

In Monster Hunter, especially the recent World, a large part of the fun is exploring the game’s lush environments and figuring out how to take on the game’s wide variety of Monsters.

As a setting, The Shattered Isles falls way short of the high bar set by its competitors. The locales you’re sent to are basically just glorified themed arenas with very little to see or do other than just looking for the Behemoth which sometimes spawns right in front of you.

Just as annoying are scenarios where your teammates find the monster first, but there is no way for you to know where the monster is until you find it yourself.

There were several occasions when my teammates would be losing health because they’re in a battle, but my stupid self is running around the map looking for the fight. They’re too busy to let out the flare for me to find them, and I’m left wandering into the battle to only fight for a minute or two.

Also problematic is that Dauntless on the PlayStation 4 has plenty of technical issues that prevent the online play from being enjoyable, and because of the game being free-to-play, you always have to be connected.

Imagine it: I’m hunting a very powerful Behemoth with my squad and we are kicking some serious Behemoth butt. But, before I can win anything or get any satisfaction from a completed hunt, my game would often disconnect due to server or connectivity issues on the end of Dauntless. As you can probably imagine, this sucks.

For what it’s worth, my co-workers playing on Xbox One and PC did not have these same problems. But still, PlayStation 4 is a popular platform for Dauntless, and if you’re choosing to download it there you should know that lots of people have been having these problems.

If you’re willing and able to play on another platform, it may be worth doing so until these issues are sorted.

Also, there’s no option that lets you squad up with former teammates after a hunt ends and that’s unfortunate. There’s no connection –no camaraderie. I’m so used to being put into a smaller VIP area with my other teammates in MH, a place where you can drink, chat, and even arm wrestle, but Dauntless doesn’t have that.

Dauntless is free-to-play and it’s a major reason for its popularity, so let’s talk about the game’s microtransactions. Dauntless does not make you spend any of your real-world money. You can pretty much do everything that those who do decide to purchase the Hunter’s Pass can. People who do purchase the pass will have access to extra cosmetic items though.

Pass owners won’t have an advantage in battle, which is something that I can definitely commend the developers for. There’s no pay to win here. Dauntless is able to be fully enjoyed without spending a penny and that’s awesome.

I have to say that the time I spent on Dauntless really made me appreciate the polish of other similar games but I still enjoyed my time with Dauntless, despite its issues.

The weapon variety and a mix of cool Behemoths to fight makes it one of the best free-to-play games that I’ve ever jumped into and I just love how the game doesn’t attack you with microtransactions. There’s a lot of value and fun to be had in Dauntless, especially considering the non-existent cost of entry.

Although it’s a copycat in a lot of ways, Dauntless has its own perks that make it worth checking out for fans of the genre looking for something that’s very low risk to try, familiar, and fun.