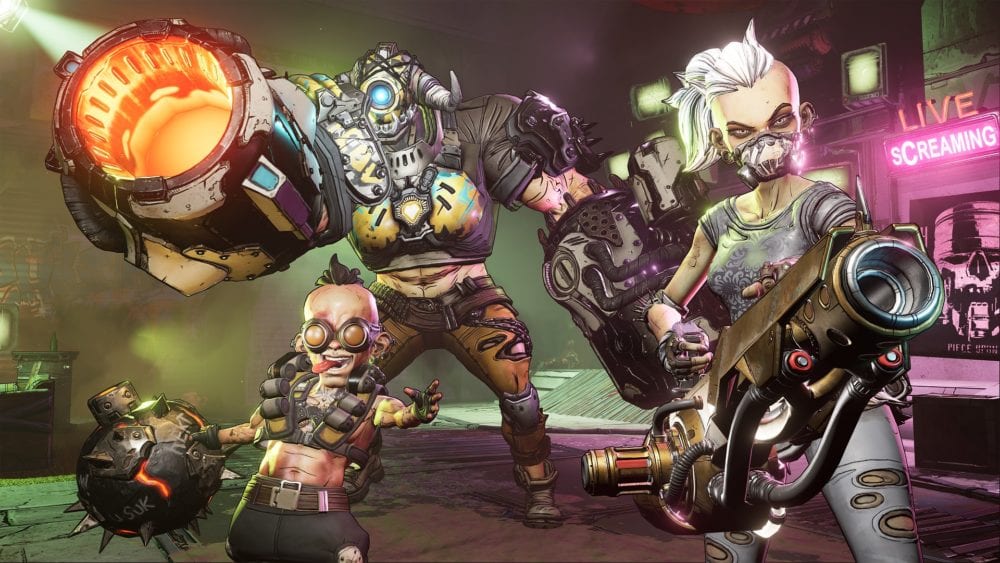 Gearbox Studios’ esteemed Borderlands franchise is making its big comeback later this year. The third game of the series is packing new characters, gameplay mechanics, and an even more eye-popping cel-shaded aesthetic. But is Borderlands 3 coming to Nintendo Switch? Here’s what you need to know.

Will There be a Nintendo Switch Version of Borderlands 3?

Unfortunately, Borderlands 3 is not coming to Nintendo Switch. When the game releases on Sept. 13, it will be available on PS4, Xbox One, and PC only.

Why? Well, it’s likely nothing to do with the capability of the hardware itself.

We’ve seen some amazing ports for Nintendo Switch over the past two years that have totally changed our perception about what is an isn’t possible on the hybrid console.

DOOM, Wolfenstein, and most impressively, the upcoming The Witcher 3: Wild Hunt port have proved that where there’s a will, there’s a way. Nintendo’s little console is capable of running even the most demanding games in the right hands.

One would have thought Borderlands 3 was much less demanding than any of those aforementioned games, which is why the fact that it isn’t coming to Nintendo Switch is all the more frustrating.

As it turns out, the reasoning behind a lack of Switch compatibility is much more likely due to Gearbox’s rocky relationship with Nintendo. Back in 2017, CEO Randy Pitchford responded to a fan of Twitter who asked about the possibility of a Switch port. He said:

“I do not see that as happening. We were talking to Nintendo, but that stopped for some reason. They have other priorities.”

The situation doesn’t appear to have changed since, either, as we’ve heard nothing to suggest the contrary. That all being said, we wouldn’t totally discount a future Switch version of the game.

After all, we’ve seen stranger things happen recently, and the Switch’s continued commercial success makes it an attractive platform for publishers.

If we do hear of anything, we’ll be sure to keep you posted on the matter. For everything else Borderlands 3, keep it right here on Twinfinite.

Comments
Continue Reading
Related Topics:borderlands 3, is it coming to switch