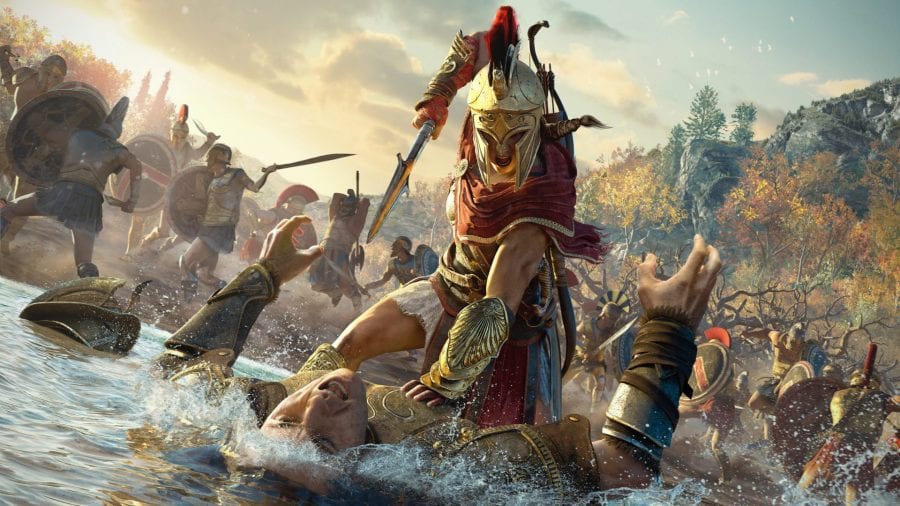 [Endless Playlist is a series of monthly articles where we pick a video game soundtrack for discussion and try to provide a critical analysis of how it performs within the game it’s from, and how it holds up on its own. This month, we’re breaking down the Assassin’s Creed Odyssey soundtrack.]

Western games and their accompanying soundtracks aren’t usually very fun to talk about, if only for the simple reason that they all seem to subscribe to the belief that the music must be as cinematic and ambient as possible.

Assassin’s Creed falls into this trap most of the time, but there was one very specific moment in the series where I’d felt like the music had finally come to life, and I was almost in shock of the fact that a track from Assassin’s Creed actually made me feel things.

That moment was in the final mission of Assassin’s Creed III, the worst and most boring mainline game in the series. Up until that final mission, Connor was a complete bore, the story was weird and confusing.

But then we get to that final chase sequence, and this high-octane, heart-pounding track starts blasting as you’re running over planks and vaulting over stalls to catch the devious Charles Lee.

It was this dramatic, orchestral amalgamation of crying violins and violent drums backing up Connor’s desperate yells that really fueled my determination to stop the villain once and for all. It was a relentless 1-2-3 beat that never stopped.

All of a sudden, I was invested in Connor’s pain, in his fight, when up to this point he was nothing to me but a block of wood. I never wanted that chase to end.

The Flight have been composing music for video games since 2008, but their real breakout effort was back in 2017, when they composed the soundtrack for Horizon: Zero Dawn.

The earlier half of Horizon’s soundtrack featured heavy tribal influences to represent the different factions in that post-apocalyptic world, and a lot of that has translated to the music for Assassin’s Creed Odyssey as well.

The biggest challenge of composing music for a game set in Ancient Greece was, of course, actually figuring out which instruments would fit that period best. After all, there’s little evidence to tell us exactly what kinds of music or instruments were used during that period of history, so The Flight had to do their own research and improvise a little.

Speaking with Enternity, via Viral BPM, The Flight’s Alexis Smith cited the dulcimer, bouzoukis, panpipes, and “various lyres” as some of the instruments they’d used to try to bring the world of Assassin’s Creed Odyssey to life. And it worked.

We’ll start with the best —the main theme of Assassin’s Creed Odyssey, titled Legend of the Eagle Bearer.

Right from the beginning, you can hear a lot of the tribal influences of Horizon Zero Dawn’s music, thanks to the strings. But you also get a hint of the cinematic modernity that’s so present in Assassin’s Creed soundtracks thanks to the looming backing percussion.

It’s not long before the track launches into its crescendo with the percussion and tribal drums out in full force, but the track’s not done just yet. We get a brief strings interlude before the chanters come in to give us the full force of this explosive main theme.

Despite being a simple repeating four-beat piece, it’s the way the instruments layer on top of each other, along with the vocals, that give Legend of the Eagle Bearer such a rich sound. It’s a very cinematic way of representing the epic Spartan battles that we’ll be getting to in the game, and we’ll hear it a couple more times throughout the score as well.

Enter the Animus, for instance, starts off as being a rather typical, sci-fi style track with its echoing reverb. The electronic style track is synonymous with the modern story sections of the Assassin’s Creed series at this point, and just like the modern narrative itself, these tracks aren’t always the most engaging to listen to.

Then the Eagle Bearer motif slips in about partway through the track, and you get The Flight’s version of an Ancient Greek twist on the modern palette of Assassin’s Creed.

Battle music has never typically been Assassin’s Creed’s strong suit either, but surprisingly, there are some standouts in Odyssey.

Revenge of the Wolves is a prime example of the “in your face” combat music, starting out with a predictable ominous build-up that eventually leads into tribal drums. However, The Flight also sneaks in some horns and chimes in there to assist the rising tension.

It’s easily one of the tensest combat tracks in Assassin’s Creed Odyssey, thanks to the disparate chimes swerving in and out of the piece in a fixed, but somewhat unpredictable, manner.

Contrast that to Pirates, Thugs, and Bandits, which adopts a much more subtle approach to encounter music. The early moments of this track are this gorgeous rhythmic back and forth between strings and percussion, almost like a riff-off between the instrumental types representing two sides of a wavy conflict.

The two sides are completely separate at first, but it’s not long before the riff swaps get more rapid and they start blending together to create a fiery, collaborative chorus. Whereas Revenge of the Wolves’ intensity serves as a more intimate combat track, Pirates is far more playful, perhaps to indicate the uncoordinated and unpredictable nature of the sea.

That said, not all of the battle music tracks are quite as good as these two. Like most other Assassin’s Creed soundtracks, you often get overly ambient or cinematic pieces that blend so well into the game you barely notice them at all. And when you listen to them after, you hardly remember when they even played during the game itself.

On the Battlefield is one of those tracks, largely comprised of drums, and largely forgettable until the very end, when you get another hint of the memorable Eagle Bearer motif. Not quite enough to save the track, however.

Then there’s what I like to call the token tragic track, which is basically your sad track with soft vocals to let you know that something sad is happening in the game right now, and you should be emotional.

The token tragic track of Assassin’s Creed Odyssey is none other than Phoibe’s Fate, which plays during a particularly affecting moment in the story. It’s not necessarily a bad piece by any means; it’s a short track that opens with the female vocalist, and tender, disparate strings to set the mood.

I’m fairly sure you only hear it once in the entire game, and it’s over before the music gets the chance to go anywhere interesting.

Again, it serves its purpose in highlighting Phoibe’s fate, but you’ll quickly find that Assassin’s Creed Odyssey is filled with so many of these one-off tracks that don’t serve much thematic purpose other than to let you know that something emotional or important is happening onscreen.

If Phoibe had a dedicated theme of her own, maybe this could’ve been a more memorable piece, but alas, she does not.

That’s probably one of the biggest downfalls of Assassin’s Creed Odyssey’s music; as good as its main theme is, it never feels like it’s been properly woven into the DNA of the score itself. It’s one of the three main recognizable themes in the game, but it feels so woefully underutilized, especially when you consider how big this 56-track collection is. It feels like a missed opportunity.

The other two themes are, of course, Assassin’s Creed (or Ezio’s Family, as ACII fans will be quick to correct you) and Myrinne.

Originally composed by Jasper Kyd in Assassin’s Creed II, Ezio’s Family is an instantly iconic theme that invokes a lot of nostalgia thanks to that recognizable ostinato and the repeating vocals. Odyssey provides an Ancient Greek twist on the theme with its new instruments and deeper vocals.

What’s interesting about Ezio’s Family is that it’s since been renamed Assassin’s Creed, to symbolize that this really is the main theme of the franchise at this point, which is certainly fitting. The problem? It’s not a theme that feels properly utilized.

Whereas Legend of the Eagle Bearer felt underused, Assassin’s Creed is almost overused as you hear it every time you open up your map and quest menu in the game, and of course, again at the end of the game.

For a theme that’s meant to be representative of the entire franchise, you’d think that it’d be reserved for the big narrative moments, and not ambient music you listen to when you’re trying to figure out where to go next in a large open world.

The third theme is Myrinne, which plays when you first meet Kassandra’s mother. Unlike the token tragic track that is Phoibe’s Fate, this is a proper, fleshed out theme for Myrinne herself as a character, and it’s woven into the game’s narrative threads rather effectively.

You hear a more vulnerable and somber version of it in Things Fall Apart, which plays during the game’s worst, but most fitting, ending.

You hear shades of it in A Happy Family, which is quite possibly the most impactful track in Assassin’s Creed Odyssey, at least in terms of the kind of music that embodies the entire narrative of the game.

The title is a bit of a misnomer, as this is an extremely somber track, which I feel is greatly appropriate for Odyssey and representative of the Greek Tragedy elements of the story.

Odyssey’s story is driven by Kassandra’s desire to be reunited with her family, and the internal conflict that comes with that desire itself.

The track is a culmination of the two big themes in the game, including Myrinne and Legend of the Eagle Bearer, representing the duality of Kassandra’s role in the game: her familial desire, and her ascension as the being who kickstarted the conflict between the Templars and the Assassins.

A Happy Family is a very acoustic track, at least in its first half, but bogged down by a rather experimental sounding midpoint that doesn’t quite work with the rest of the music. Thankfully, it doesn’t last too long before we go back to the strings, and The Flight brings back the Eagle Bearer motif to close things out.

As a whole, I would say that it’s Odyssey’s story that manages to elevate the soundtrack to a new level.

Whereas Assassin’s Creed III’s Trouble in Town actually did the impossible and made me feel things for its protagonist through its final mission music, Assassin’s Creed Odyssey’s soundtrack largely falls into that same trap of creating a cinematic soundscape for the story, rather than focusing on recurring themes to help enhance the already impressive narrative.

Is it worth a listen if you haven’t played the game? Certainly not, as so much of your appreciation for its music would likely only come from your love for Odyssey’s narrative. Every track in this collection is meant to set the scene for the story, largely taking a backseat to what’s going on in the game.

That works for a cinematic game like this one, but at the cost of a score that could’ve been truly deep and memorable.

There are bright spots in this soundtrack, but they’re simply too few and far between, and maybe that’s the real tragedy here.