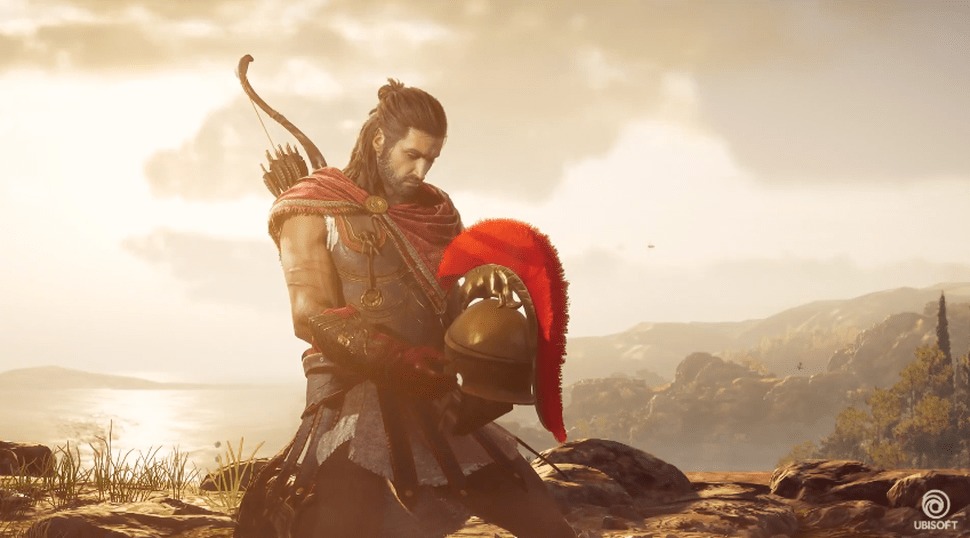 Ubisoft has taken bold steps with Assassin’s Creed Odyssey. You can choose between a male and a female character at the start of the game. You can romance NPCs. You can explore different dialogue options and story branches. All amazing stuff.

However, it’s in the game’s ending itself where Ubisoft actually excels.

Be warned that we’re about to spoil the plot and ending for Assassin’s Creed Odyssey, so turn back now if your eyeballs aren’t ready.

One of the most interesting things about Assassin’s Creed Odyssey is the way it incorporates some classic Greek stories into its main and side quests.

For instance, we’re all familiar with good ol’ Oedipus. Y’know, the guy who killed his dad and married his mom? Odyssey riffs off that myth in a hilarious side quest where a man named Supideo hears about a similar prophecy in which he causes the death of his parents. In order to thwart that, he gets Kassandra to retrieve his sword and shield and put them away. Unbeknownst to him, however, Kassandra ends up sleeping with the blacksmith (who is his dad) for the swor, and kills a bandit leader (who is his mom) for the shield. Supideo’s adoptive parents then look at you and say, with a straight face, “You killed his mater and fucked his pater!”

Ubisoft plays off Greek myths in sometimes satirical and tongue-in-cheek ways, and Assassin’s Creed Odyssey ends up being the most unabashedly hilarious and witty game in the series as a result. However, the game also manages to use these Greek elements in heavier and darker ways in the story as well. And this comes through especially well in one of Odyssey’s worst main story endings.

All throughout Assassin’s Creed Odyssey, the hero’s sibling is set up as the main antagonist of the game. So if you picked Kassandra, Alexios would take on the role of Deimos, the most fearsome warrior in the Cult of Kosmos. And as you play through the game, you get to make choices and choose dialogue options to decide whether you think Alexios is worth saving or not.

My first time through the game, I played Kassandra as a hardened mercenary who wouldn’t work for free. However, she also had a soft spot for her friends and family, and there was nothing she wouldn’t do to see her family reunited once more. With that in mind, I resolved to save Alexios, and I didn’t hesitate when Myrinne made me promise to bring him back home safely.

As the story progresses, you’ll reach key points where you have to choose the appropriate dialogue options if you want to save Alexios in the end. I did the best I could and picked the options that I thought would convince Alexios that the Cult was using him.

Everything comes to a head when you reach the final quest on Mount Taygetos, the very place where Kassandra and Alexios were tossed off the cliff as kids. Here, Alexios is mean and evil as ever, but you have a final chance to convince him that he can be redeemed. Again, I did my best to convince him and, well, here’s the ending I got.

In a heart-wrenching moment, Alexios fakes us out and stabs Myrinne mercilessly before crossing swords with Kassandra. Needless to say, Kassandra eventually manages to strike him down. With her dying breath, Myrinne tells Kassandra to always move forward. In a final breathtaking shot of Mount Taygetos, we see Kassandra fall to her knees in tears, covered in blood and surrounded by the dead bodies of her only remaining family.

Now, the interesting thing about the game’s ending is that Myrinne’s last words here are exactly the same as if you had chosen to kill Alexios instead of trying to convince him again on Mount Taygetos. But because Alexios doesn’t have the chance to deceive Kassandra and Myrinne, Myrinne ends up living in this ending. And yet, her words don’t quite carry the same weight as in the ending where she dies.

And in Assassin’s Creed Odyssey’s ‘best’ ending, Kassandra succeeds in convincing Alexios to come home, and they have a big, happy family reunion in Sparta. Everything’s all fine and dandy, but it also doesn’t feel appropriate for Odyssey’s story. In fact, it’s actually kinda jarring and off-putting.

In my view, the game’s ‘worst’ ending actually ends up becoming the most fitting conclusion for the story precisely because it plays so well into the Greek Tragedy genre of drama. Greek Tragedies have a few common elements including but are not limited to, a tragic hero, the downfall of a character with good morals, family dramas, and death (of course). Bonus points if the hero or protagonist is a relatable character who can make mistakes or bad decisions from time to time, which is exactly how most people would play Kassandra or Alexios.

By embarking on Assassin’s Creed Odyssey’s worst story path, I’d effectively met all the major requirements for a Greek Tragedy. Kassandra and Alexios’ family was torn apart at the very start of the game because of a Greek prophecy. Alexios himself could’ve very well grown up to be a respectable adult, but ends up being corrupted by the Cult. Kassandra is hardened, but she always tries to do The Right Thing (TM). Yet, despite trying to do The Right Thing, or perhaps because of it, she fails to see that Alexios is irredeemable. This eventually leads to Alexios killing his own mother (even more bonus points for matricide), and Kassandra having to put him down herself (more family murders).

Alexios, or Deimos, is also a very key player here. We have to believe that we can save him, despite knowing that he’s grown up under the care of the Cult. After all the heinous crimes he’s committed, we have to think that he can still be redeemed, even though he’s clearly messed up. His deliberate act of making the player think that he’s had a change of heart is genius; it makes the ending that much tougher to swallow because it’s the player’s naivete that led Myrinne to her tragic death.

Odyssey starts you off with a great framework for a Greek Tragedy, and that’s why the game’s best ending feels off and inappropriate. That’s why the worst ending is as impactful as it is, and why it effectively elevates this from “just another Assassin’s Creed game but with good RPG elements,” to “possibly one of the strongest Assassin’s Creed games with a fantastic personal story.”

Perhaps the biggest blunder Ubisoft made with Odyssey’s story was allowing players to pursue different endings with dialogue options. As well-done as the RPG elements were in this game, it’s far too easy for players to get an ending that just isn’t as satisfying or on the same level as the Greek Tragedy one they’ve crafted here.

By the end of my first playthrough, I was exhausted. Assassin’s Creed Odyssey is a very fun video game to play, but it’s also an emotional rollercoaster that’s utterly relentless if you make the right choices. That’s a mark of good storytelling. It’s just a shame that it’s so easy to miss if you make a single misstep.