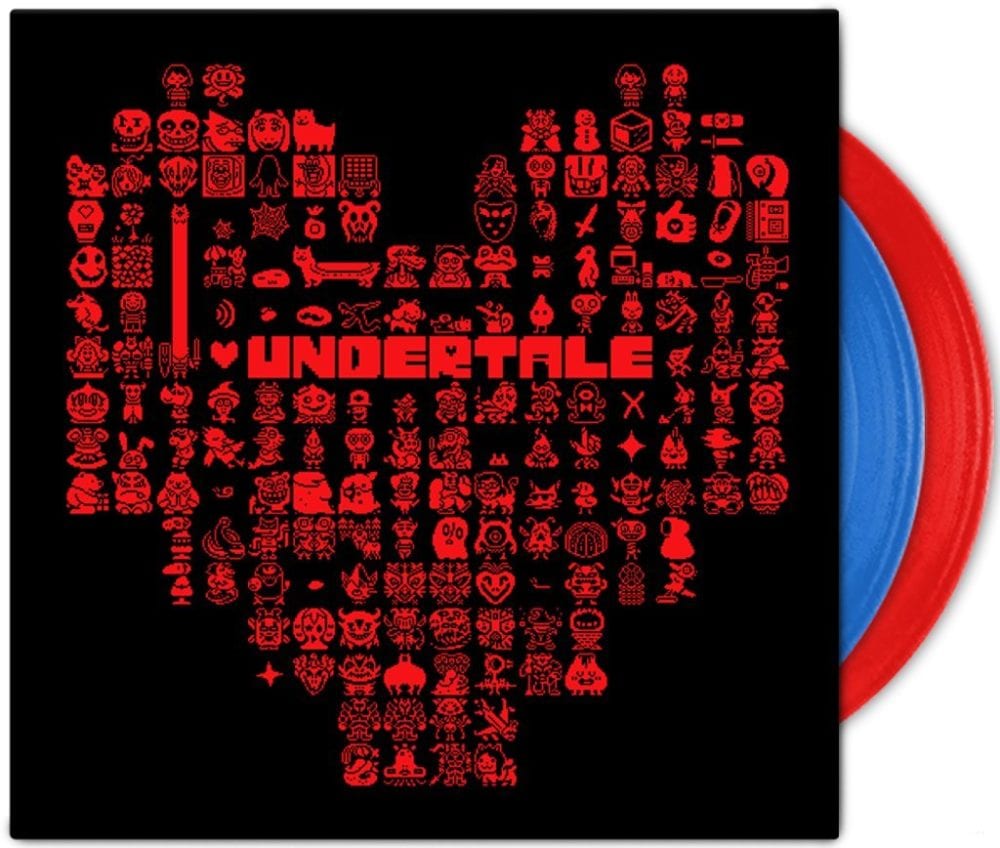 Toby Fox’s runaway hit indie game Undertale is remembered for a lot of things, but key among them is its music.

Ranging from retro bit-tunes to pounding orchestral melodies, the OST is highly regarded by many, touted as the perfect auditory pairing for almost any activity from leisurely listening to enjoyable background noise.

It’s little wonder, then, that the OST received a popular and highly regarded vinyl release. Covering 41 tracks via two records, it brings all of the tunes players fell in love with while playing the game to a new format without losing any charm in the process.

As an added bonus, the vinyl also comes with some phenomenal cover art and custom record designs, lending some of the personality from the game to the item that fans and collectors alike will love.

Admittedly, it can be a bit tricky to track down a copy of the vinyl – the original prints have been out of stock for some time now – but when copies do become available via Amazon and other re-selling sites, they’re typically sold for a modest price.

To that end, it’s a piece that no video game fan who doubles as a vinyl aficionado should pass on picking up. 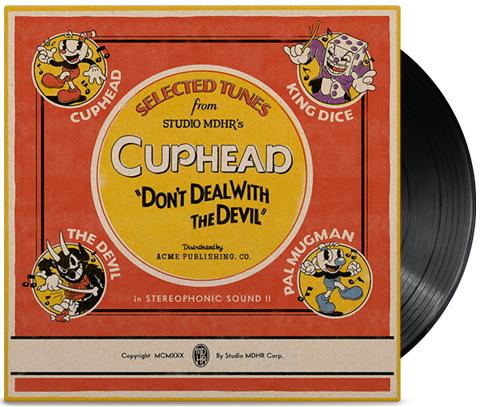 Admittedly, it’s a no-brainer that the Cuphead soundtrack is a joy to own in and listen to on vinyl.

Much like the game’s rubber hose art style, Cuphead’s OST harkens back to the bygone days where jazz and swing prevailed as people’s musical genres of choice, along with the grain and raw sound quality associated with it.

Brass, strings and the like fill almost every track, while a bouncing and lively beat whisks most every player back to the imaginative – and challenging – in-game fight tied to it.

And that’s just the music itself. The vinyl’s record and cover come in a classic-style that, while simple, perfectly captures the tone of the game as well as the era it tries to encapsulate.

Best of all is that it’s one of the most readily available vinyl soundtracks out there, with copies for sale from most any retailer that carries them digital or otherwise. 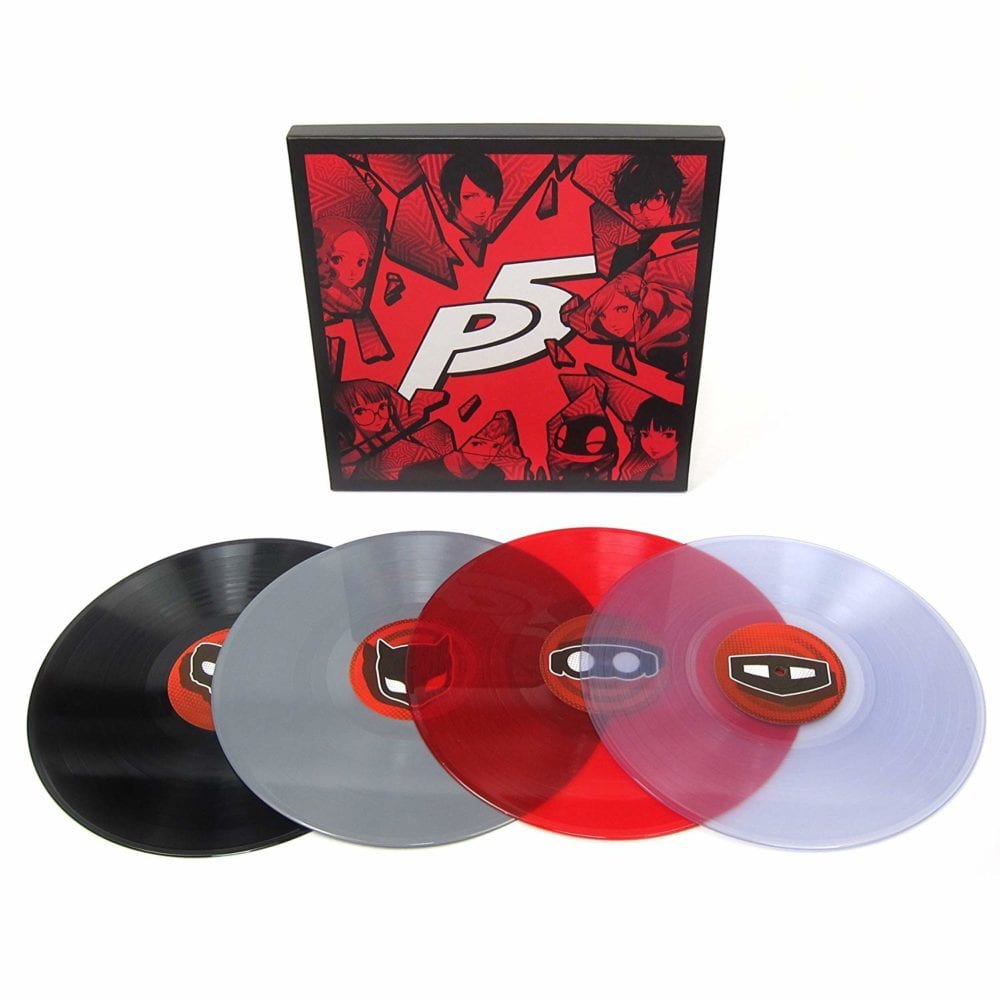 Anyone who has heard the Persona 5 soundtrack will talk your ear off about how good it is, so believe us when we say that the quality translates perfectly to vinyl form.

Presented through four double-sided, custom-designed records, the energetic and feisty OST springs to life when it’s placed on a record player.

Tunes people never thought could be any better fill the room and wash over listeners with bombastic melodies and orchestral scores that’ll whisk them away to memories of harrowing heists, emotional exchanges and the like.

However, this vinyl does come with a catch: It’s no longer in print, and as a result, requires some digging into re-selling sites like Amazon to secure a copy.

Given what listeners will get out of their trouble though, it’s far from too big of a price to pay, and the extra effort will make it all the more worthwhile when they can finally add the vinyl OST to their collection. 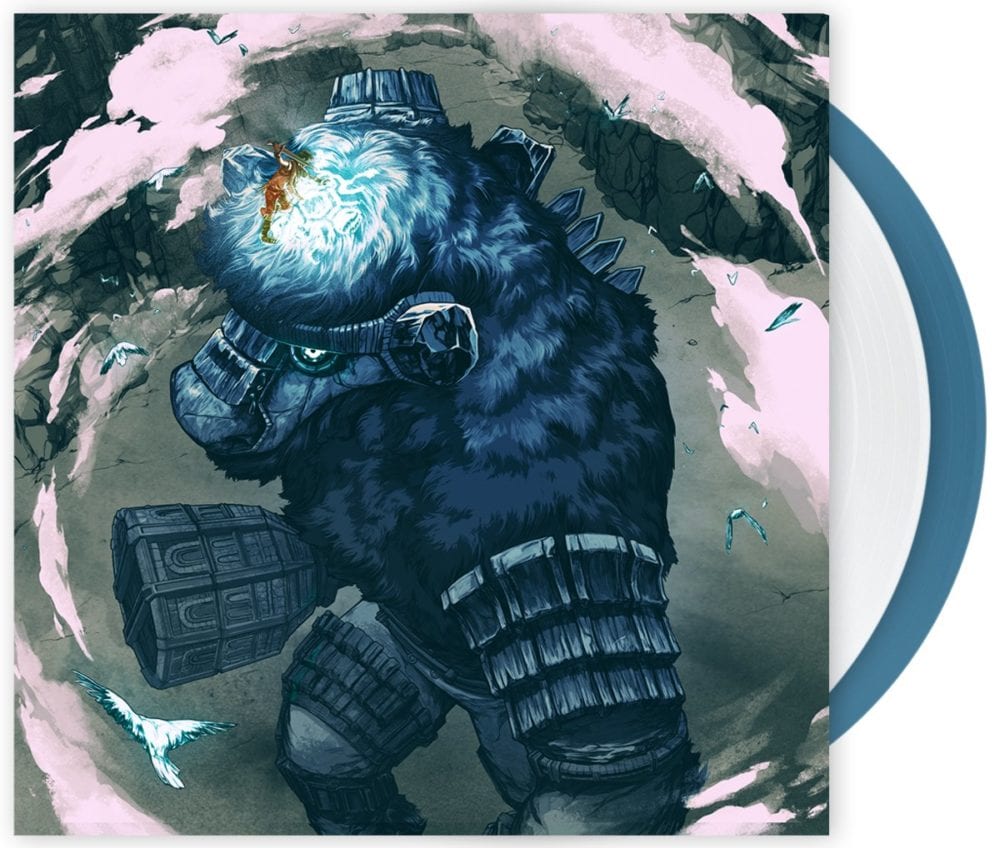 Shadow of the Colossus is one of those games that people have few qualms with pointing to as an artistic masterpiece, and as a result, few pieces of merchandise tied to it aren’t considered art in their own right.

Case in point: the Shadow of the Colossus vinyl soundtrack, which translates all of the game’s haunting melodies and dynamic tracks into record format.

Presented on a custom-designed record housed in a sleeve bearing custom art, it’s a complete package that can happily house the item on one’s shelf until the time is right to set its tunes loose on a record player.

Of course, given its quality, it’s little surprise that people snatch it up whenever it’s in stock, making it hard to track down a new copy unless one’s timing is perfect.

Fortunately, this also means there’s always a sizable amount for sale on re-selling sights like Amazon, and for a modest price that most any fan could afford. 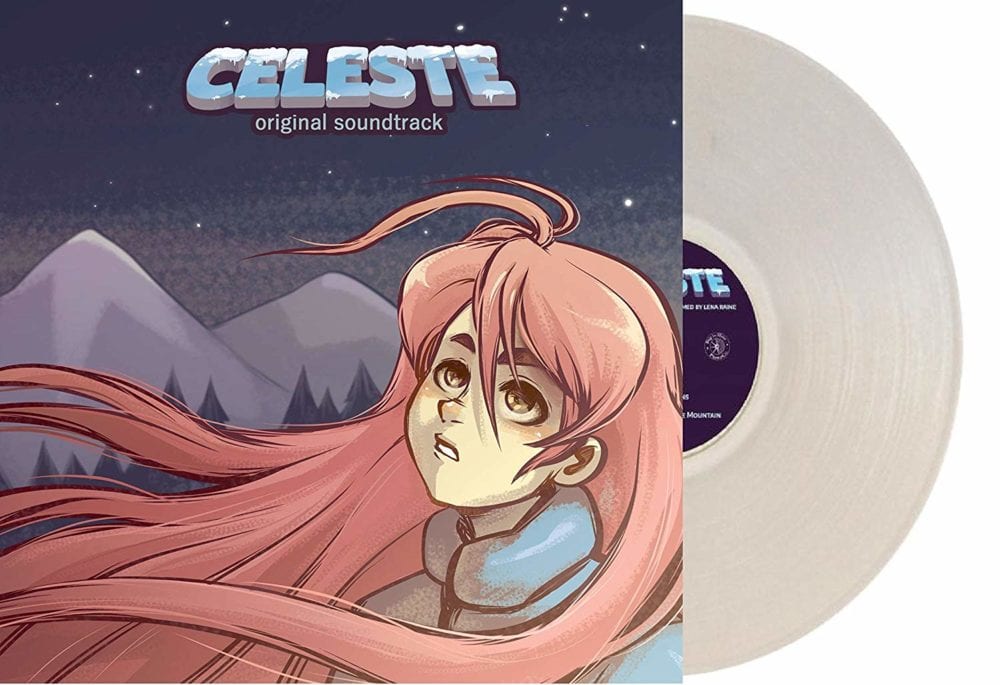 Given the fact that Celeste’s soundtrack won awards in 2018 for its quality, there aren’t many more praises that could be sung about it to convince people of how good it is.

For those who already understand this fact though, its vinyl soundtrack acts as a way to experience the dulcet tones and solitary sounds all over again, yet in a new light.

Whereas hearing the soundtrack while the game plays is an experience in and of itself, hearing it on vinyl is like being washed over with sound, surrounded by all the emotion and impact injected into it by composer Lena Raine.

As an added bonus, the record’s design has several different designs for fans to choose from. Some retailers like Fan Gamer offer psychedelic red and blue albums, while Black Screen Records have a snow-white variant for sale.

All of this comes with the cherry on top that it’s sold for a modest amount at most any retailer, allowing you to add it to your collection without breaking the bank. 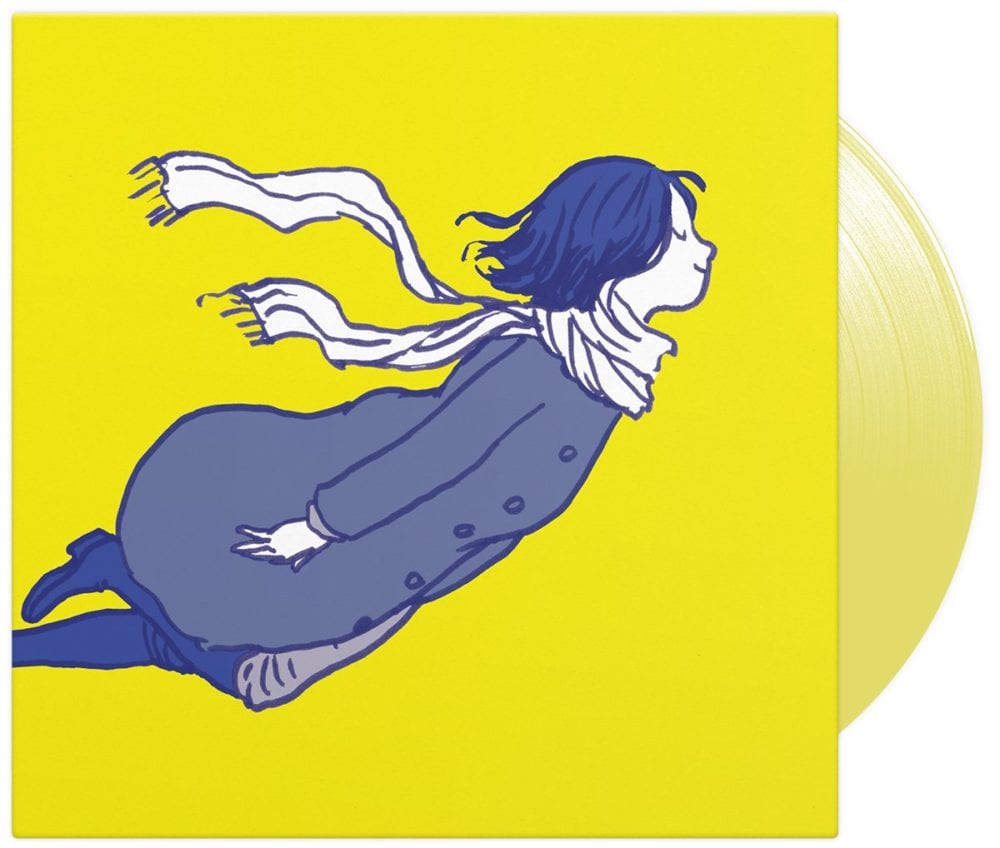 If there’s one video game soundtrack that translates perfectly to a vinyl you can put on to laze the day away with, it’s Florence’s OST.

Soft and whimsical with the weight of a cloud, each song composed by Kevin Penkin lifts the listener further up into a drifting, relaxing haze of good feelings and ease that are hard to match.

This is doubly true of the vinyl version of the soundtrack, which fills any given space with good vibes and enough peaceful melodies to keep listeners in a pleasant mood well after the last track has been completed.

And that’s just what the vinyl offers to buyers from an auditory perspective. On the visual front, the OST is presented through a custom yellow record housed in a sleeve with a simple, yet elegant print.

It’s all rounded off by the fact that it’s still readily available from digital retailers like iam8bit and the like. 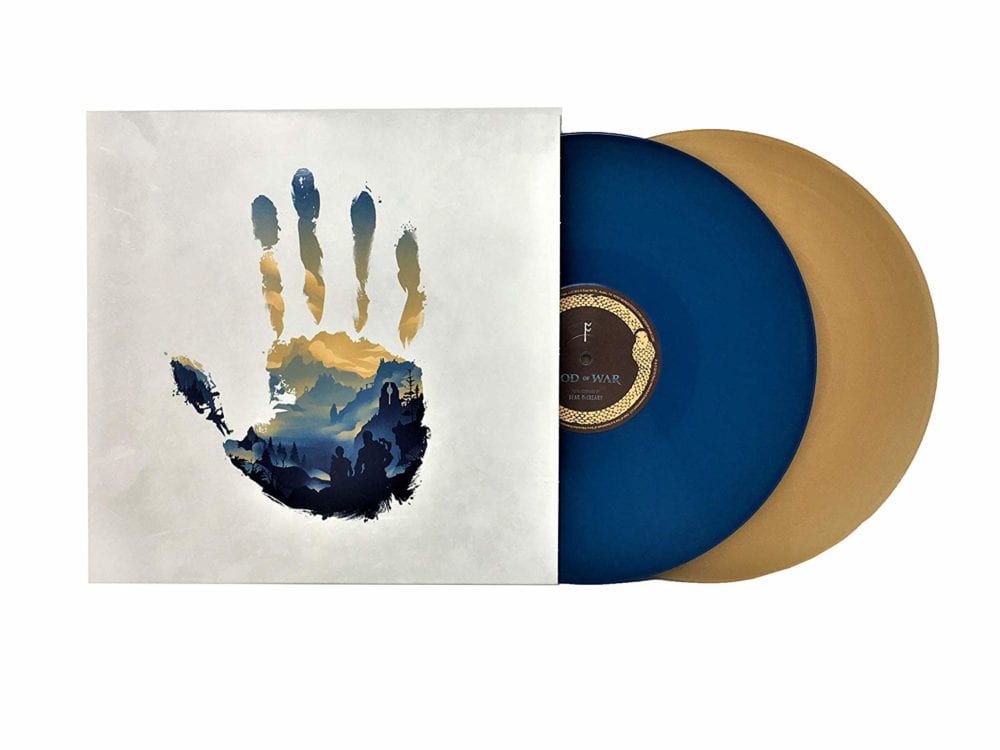 Let’s be frank: The original God of War series wasn’t ever what one would call easy listening, bristling with angry and thunderous scores that were best used in tandem with the games’ hyper-violent content.

2018’s soft reboot of the series, however, is a different story entirely. Like the game it’s tied to, the soundtrack is more contemplative, balancing out its more action-driven tracks with softer, more emotional compositions.

As a result, it stands as an exemplary OST on vinyl. It provides more variety in the tracks available than other soundtracks, and thanks to its custom record design and eye-catching sleeve art, it serves as a perfect addition to any collector’s wall.

Unfortunately, the vinyl isn’t quite as easy as some other entries on this list to obtain. It was released as a limited run item, and as a result, not many new copies are still available for sale.

Fortunately, several re-selling sites like Amazon still keep copies both new and used in stock when they can, making it that much easier to add to your collection while it’s still possible. 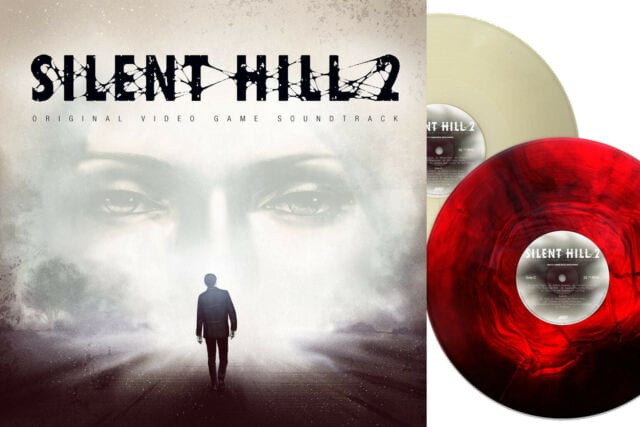 These words and more could be used to describe Silent Hill 2’s OST, which served as the perfect accompaniment to one of the most highly regarded horror games of all time, and not a single one of them would be misattributed.

For this reason, it’s little wonder the OST’s vinyl release is a must-have item for video game music lovers and record collectors alike.

Not only does it capture the sound and emotion of each track for listening in a wider space perfectly, but elements only available to records like sound grain lend themselves to the spookier tracks perfectly.

That’s to say nothing of the visual appeal of the vinyl. Offering haunting sleeve art as well as some beautiful custom record colors and designs, it’s the perfect item to display proudly on a wall cabinet or your record storage area of choice.

Throw in the fact that sites like Mondo Tees sell it for next to nothing, and there’s little reason not to add this slice of video game history to your collection. 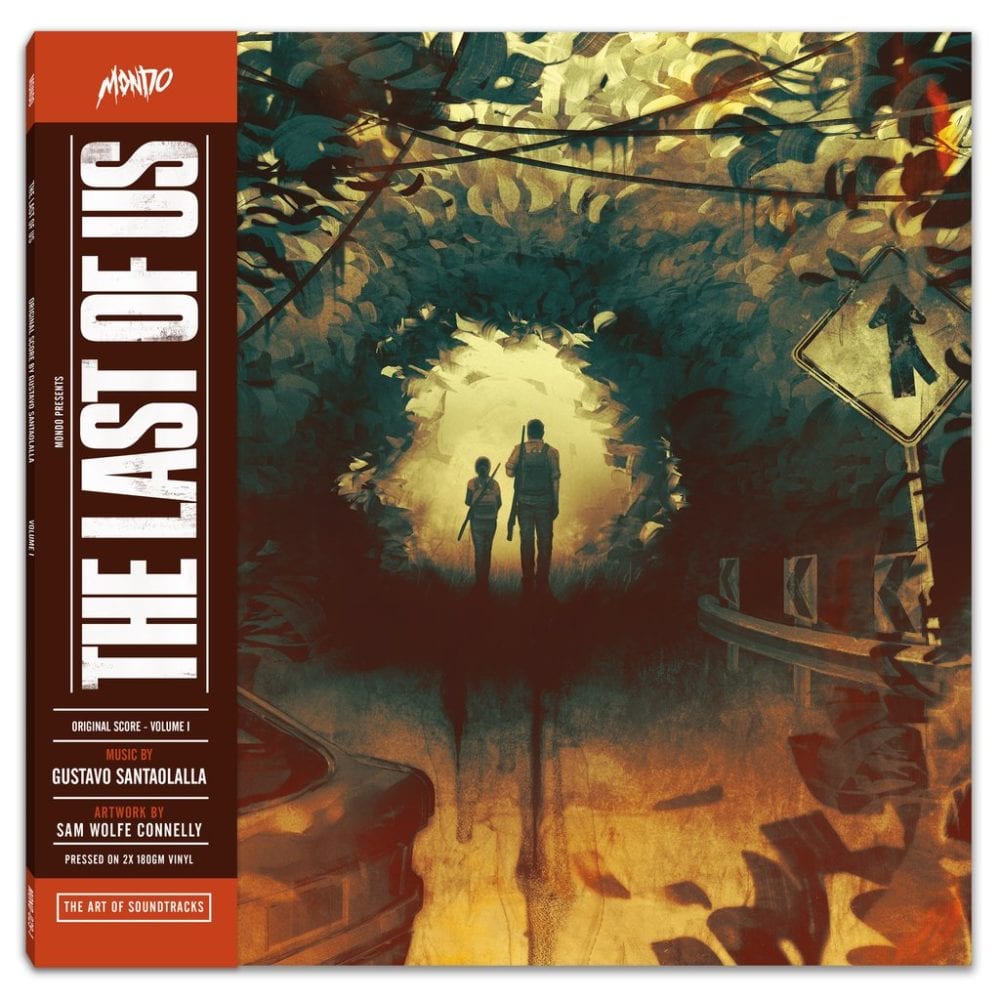 The Last of Us is hailed as one of the greatest games of all time, so it’s no surprise the game’s soundtrack is a gem in and of itself.

Filled to the brim with slow, contemplative orchestral tracks, it carries a surprising amount of the weight with portraying the bleakly beautiful world of the game series.

Even when taken on its own, it serves as an ideal accompaniment to a quiet afternoon of thinking, studying or whatever else requires some serene sounds in the background.

This is doubly true if you own the OST on vinyl. Between the scratches and natural sounds provided when it’s played on record, it gains a new feel that can’t be beaten by listening to it through other mediums.

The only catch is that hunting down the full soundtrack can be challenging. Having been out of print for some time now, both the first and second parts can only be found for resale on sites like Amazon, and not always at the same time.

For your efforts though, you’ll be rewarded with a worthwhile prize that’ll serve as a cornerstone of your collection. 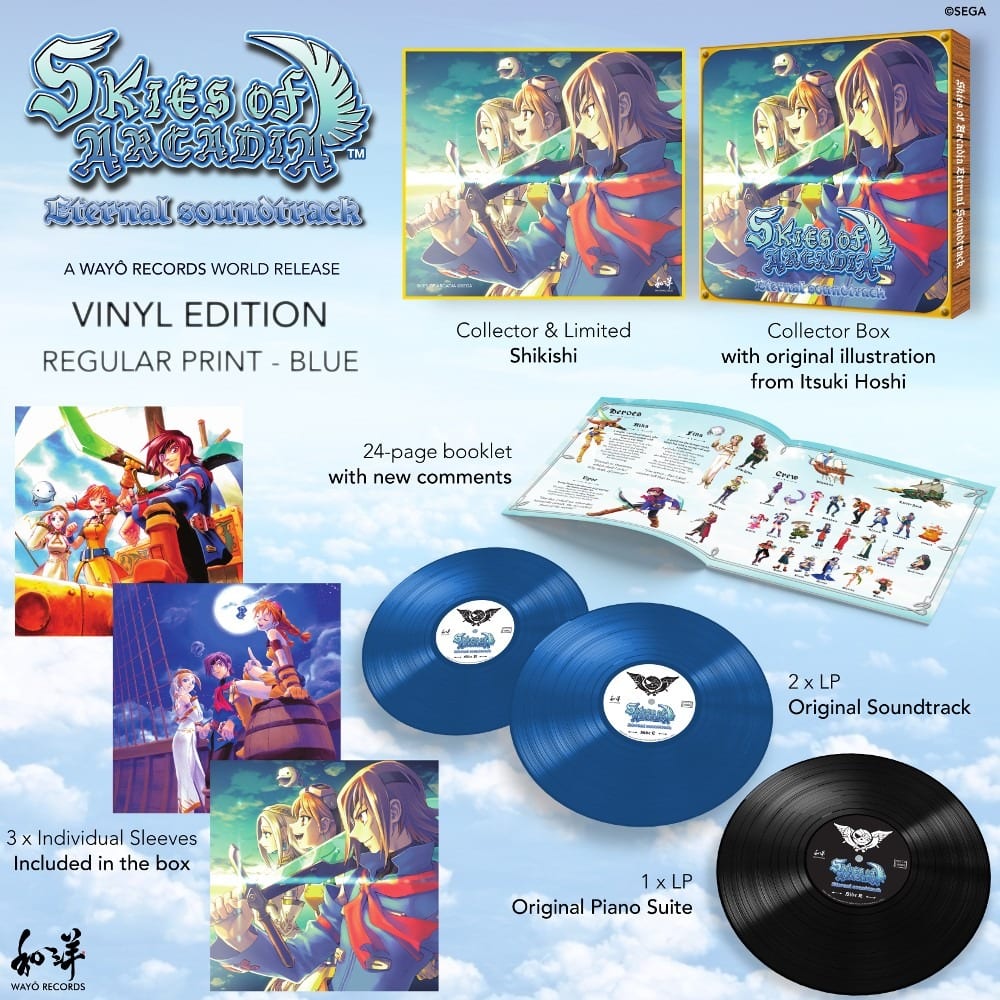 If there’s one genre that’s known for great soundtracks, it’s JRPGs. Most every game has a sense of bombast, adventure, and energy that can’t be beaten, and that’ll bring even the most mundane task to the next level.

For proof, look no further than the Skies of Arcadia OST. Packed with tracks that’ll put a pep in any listener’s step, it’s ideal listening whether you’re enjoying a day on your own or trying to get some work done with something on in the background.

Enter the game’s vinyl soundtrack, which provides all of this and more in a natural and soothing nature, perfect for putting on in almost every situation.

It also comes with the added bonus of custom-colored records, individual sleeves for each record that each has custom cover art and a litany of other bonuses.

The only catch is that the vinyl isn’t available just yet. Set for release next month, it’s still yet to be seen just how quickly it’ll sell out and how much each record will be worth afterward.

All the same, it’s already a record any collector should have on their list, and any fan should be rabid to get their hands on.