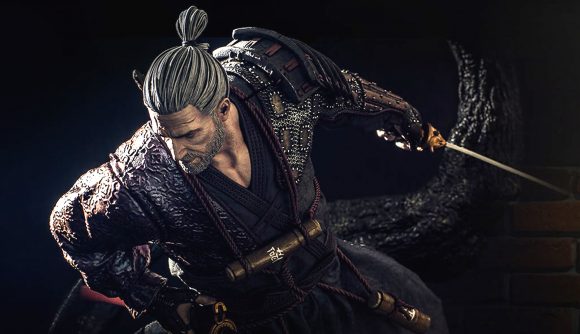 Before today a samurai Witcher game isn’t something I ever gave much thought to. But now, well, now it’s all that I want. It’s all because of a new figure CD Projekt Red is releasing through their newly launched store, the Ronin Geralt figurine.

This particular figurine takes the iconic hero of the Witcher franchise and decks him out in the attire of a Ronin, a wandering Samurai without a lord or master. He has dual katanas, Japanese armor, and even an owl buddy sitting just behind him. While it’s obviously just a conceptual statue, boy does it set the mind racing about possibilities.

The entire concept of a Witcher takes huge inspiration from the Ronin of Feudal Japan. Both are wandering swordsmen that make their living taking contracts and helping the citizens, although in the case of the Witcher that involves slaying monsters. Obviously, these ideas could easily tie in together for a really great Witcher experience.

Now you would run into a bit of a problem, seeing as there aren’t really any Japan or samurai-like civilizations that we know of in the world of the Witcher. All of the Witcher games take place on “The Continent,” mostly inspired by Eastern-European and Nordic myths and history.

However, there are areas of “The World” as it’s called that remain unexplored in The Witcher games. Then you also have the fact that the Witcher takes place in a multiverse, with beings like The Wild Hunt coming from an entirely different dimension.

An interesting twist on the next Witcher game would be to have Geralt hop through a portal and get stuck in another world, one that shares that same Japan/samurai aesthetic. In a new, hostile world, Geralt would have to figure out a way to survive, and obviously, he’d do it the only way he knows how –by being a sellsword.

There’s so much about this style that would work so well with The Witcher. A methodical sword-fighting system similar to that of Sekiro or Nioh, putting an emphasis on stances and parrying. You could then evolve this even further with Geralt’s two different swords, providing different stances or styles for each one.

It’s also an interesting idea for Geralt to have an animal ally, enhancing his Witcher vision by having eyes in the sky, something like how your hawk functions in Assassin’s Creed Origins and Odyssey.

Now I know we have so many samurai-like games coming out, between Sekiro, Nioh 2, Ghost of Tsushima, and others; but The Witcher is a unique enough series, and CD Projekt a talented enough developer, that they could put an interesting spin on it.

It’d be fantastic to see the gruff and grouchy Geralt deal with a more refined civilization, over the usual crap he’s used to dealing with.

While I doubt this new Ronin Geralt statue is any kind of indication on ideas CD Projekt Red has, it’s made me realize how much I’d support the idea.

CD Projekt Red is busy on Cyberpunk 2077, and we might honestly never see another Witcher game from the studio. While that’s sad to think about, we can still dream about the possibilities of the future.