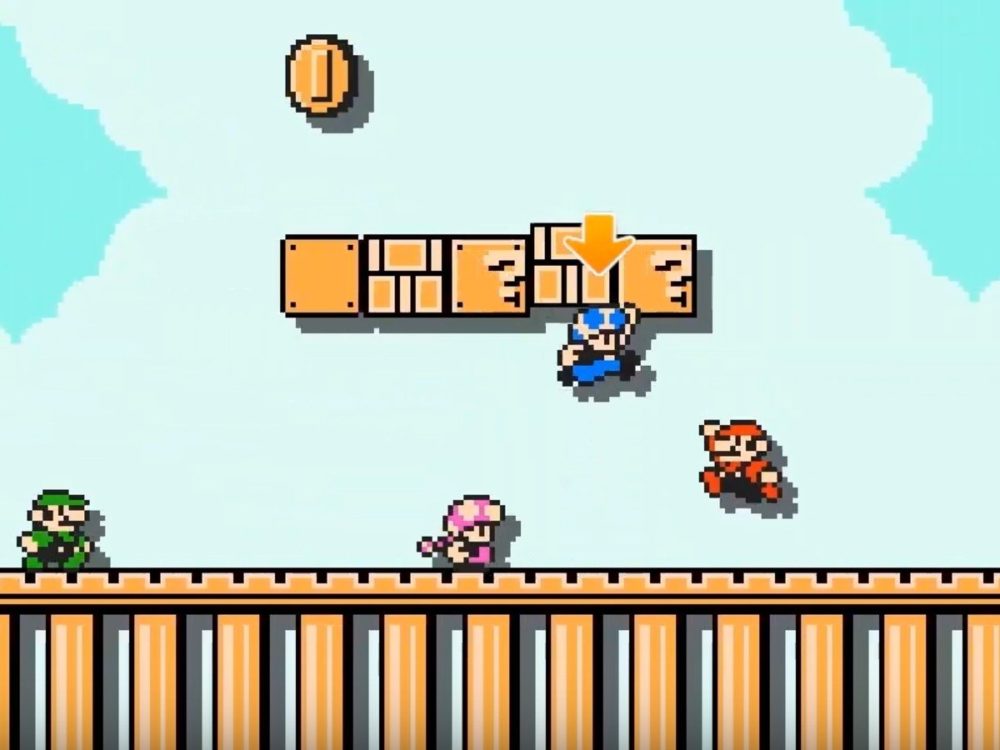 If you guys missed out on the latest Super Mario Maker 2 Direct that aired yesterday afternoon, then not only did you miss all of the new features coming to the game, but you missed out on seeing Toadette and Blue Toad in pixel art styles.

Super Mario Maker 2 has several different art styles for you to choose from that are based on most of the Super Mario titles. There’s a theme for Super Mario 3D World, New Super Mario Bros., and probably the cleanest style –Super Mario World.

Now that Toad and Toadette are playable characters in the new Super Mario Maker, we finally get to play with them in the old-school 8-bit and 16-bit art styles –a first for the ‘shroom kids. The two of them look absolutely perfect in their retro looks, especially in Super Mario World, and I’m not the only one who thinks so.

Ever since Toadette’s debut appearance in Mario Kart: Double Dash, the girl has been doing nothing but working hard to crawl her way up the Mario food chain to compete with the likes of superstars like Luigi and Princess Peach.

But now, Toadette is a star and has since appeared in pretty much every Mario Kart, Mario platformer, and Mario Party game as a playable character, at least since 2003.

She’s in the major leagues now and as soon as fans got a good look at her retro look in Super Mario Maker 2, they showed their enthusiasm for Toadette being chosen as a playable character over Princess Peach –nobody wants her anymore, she’s old news.

Kyle right here knows what’s going on here; I love when someone can look at an image like this and appreciate the true beauty of 16-bit Toadette:

This is exactly what I was talking about earlier. Soon, Mario is going to get tired of rescuing the princess over and over again. We need a new heroine to stand beside Mario, someone who won’t get kidnapped by Bowser on a daily basis:

Thought just occurred to me but I think Nintendo is starting to push Toadette over Peach as the main female playable character in the main Mario games now. Especially since in NSMBU Deluxe she gets a new form that basically turns her into Peach.

I’m sorry that we keep bringing up Toadette, but we also have to give props to our boy Toad over here. He looks just as fantastic in his Super Mario World design:

Just look at her peeking out of Kuribo’s shoe?! Isn’t that the greatest thing you’ve ever seen?:

She may be adorable and cute in her normal form, but Super Toadette in her 8-bit design is slightly terrifying. You definitely don’t want to upset this version of Toadette –why does she look like a giant?!

smb1 toadette looks like she can physically harm us- pic.twitter.com/xhjPwpFvJa

Whenever Toad and Toadette pick up a super mushroom, they seem to resemble a human and the end result is kinda creepy:

SPRITE TOADETTE IS SO CUTE 💗 pic.twitter.com/SeYKxOB6cG

This here is an evolution. I swear, the sprite work for Blue Toad and Toadette from Mario 1,3, and World is so well done! pic.twitter.com/JymVWJ4d0V

Preach it! She belongs right here with the big dogs:

I love how Toadette is now a major Mario character pic.twitter.com/RtEvprclfU

And of course, I have to bring my own Tweet into this Super Mario Maker 2 conversation and remind you guys –once again– that Toadette is the reason to pick up this game when it comes out in June:

This is the sole reason why I will be picking up #SuperMarioMaker2 … how can you not love these sprite designs for Toad and Toadette??! 😍 pic.twitter.com/VLMVkpzcXp