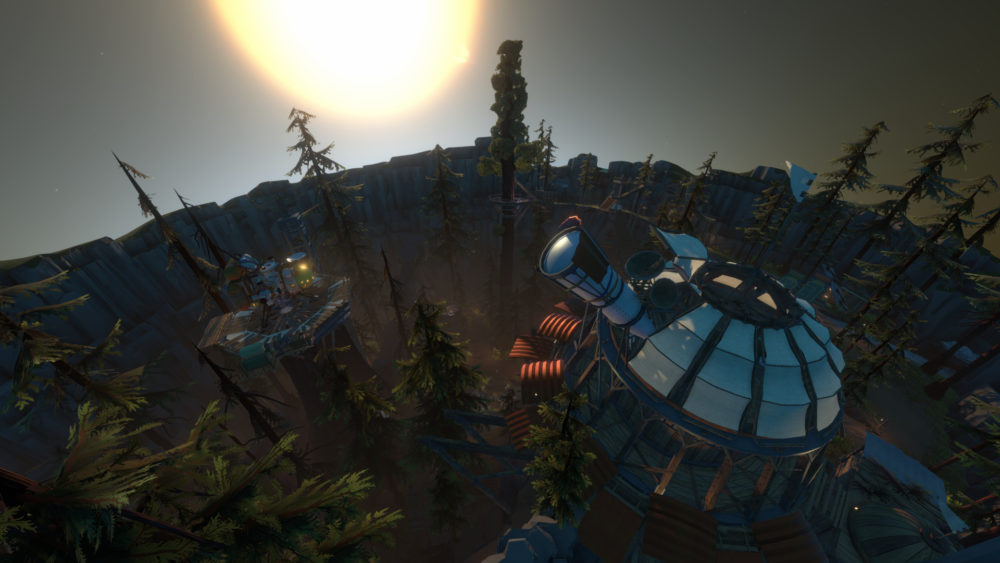 I’m just going to get this out of the way from the off. Outer Wilds may well be my favorite game I’ve played so far in 2019. That doesn’t mean it isn’t without its shortcomings, which become particularly prevalent as your space adventure comes to a close, but push through them and keep exploring and you’ve got one of the finest space adventures you can get your hands on.

Outer Wilds puts you in the role of the newest member of the Outer Wilds Ventures, a space program whose main purpose is to explore the solar system and uncover the mysteries of the various planets. Your adventure is different to those explorers who came before you, however, as you’re the first to travel the vast emptiness of space with the Nomiad Translator in hand.

This is just one of three tools you have at your disposal in Outer Wilds, enabling you to decipher the scrawlings and written conversations between members of the Nomiad race that are seemingly at the heart of the mysteries of this solar system. These are what drive the narrative forward for the most part, giving you clues as to where to explore next or explain that mysterious rune you spotted on a planet’s surface.

Your other tools are a Scout which can take photos and highlight hazards in the environment, and a Signal Repeater to help identify strange signals and drive your adventure forward. It’s a basic setup, but it’s enough for what awaits you out in Outer Wilds’ dinky solar system. There’s no combat here, but that doesn’t detract from the sci-fi fun to be had. 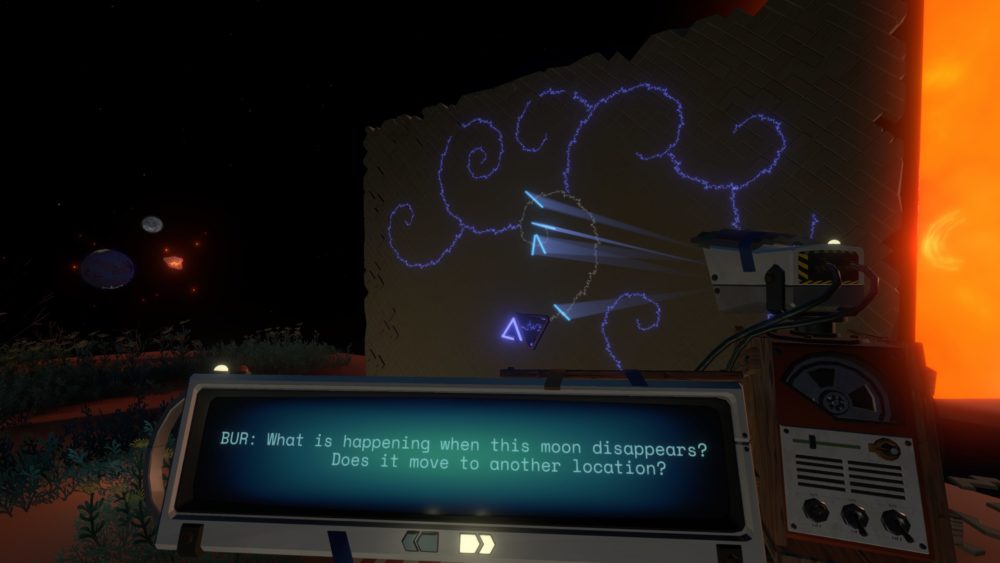 What makes Outer Wilds stand out from the crowd of space exploration games, however, is its time loop mechanic. Every 22 minutes, the solar system’s sun goes supernova, eviscerating everything with it. However, for spoilerrific reasons we’re not going to dive into here, you awaken on your home planet, ready to embark on your space adventure all over again.

The best way to describe the experience to be had in Outer Wilds is in one way I’ve seen mentioned by other members of the industry numerous times. It’s Groundhog Day mixed with No Man’s Sky. It doesn’t fall into the same trap as No Man’s Sky did in attempting to emulate the vast nothingness of space. Instead, you’ve got a relatively small solar system teeming with things to uncover.

That’s what makes Outer Wilds such a joy to play. Every planet has its own story to tell, its own mechanics and secrets you’ll need to uncover, and its own narrative threads that all tie together into the larger, overarching plot. Each time you uncover a new rumor or figure something out, your Ship’s Log is updated, meaning you’ll always be able to pick up where you left off when you wake back up.

This means that, despite the somewhat limited time constraints you’re placed under before the supernova wipes out the entire galaxy, you’re free to go at your own pace. You can just explore a single planet for a whole 22 minutes if you wish, or you can speedrun your way across the galaxy trying to uncover as much as possible in a single loop if you’re so inclined to.

Doing that would be a disservice to Outer Wilds, though. Its worlds and characters have been so fleshed out that it’s a joy to simply explore and figure things out at your own pace. Furthermore, some of its planets require you to take your time or return within a certain point in that 22-minute time span as their environments or surfaces change, enabling you to reach previously inaccessible areas.

It’s a really novel idea that lends itself to creating a solar system that feels like its ever-changing because… well, it is. Ash Twin, for example, looks like a sandy planet with very little on it at the beginning of a loop. As time passes, though, the sand shifts to the nearby planet, Ember Twin, which reveals new buildings to explore on Ash Twin, and blocks off places on Ember Twin.

As a result, exploration becomes a puzzle in and of itself, and you’ll find yourself figuring out a sequence of events you need to complete in a short space of time at particular moments within each 22-minute chunk of gameplay in order to advance yourself further through the narrative. This, however, is where things can become a little bit frustrating in Outer Wilds. 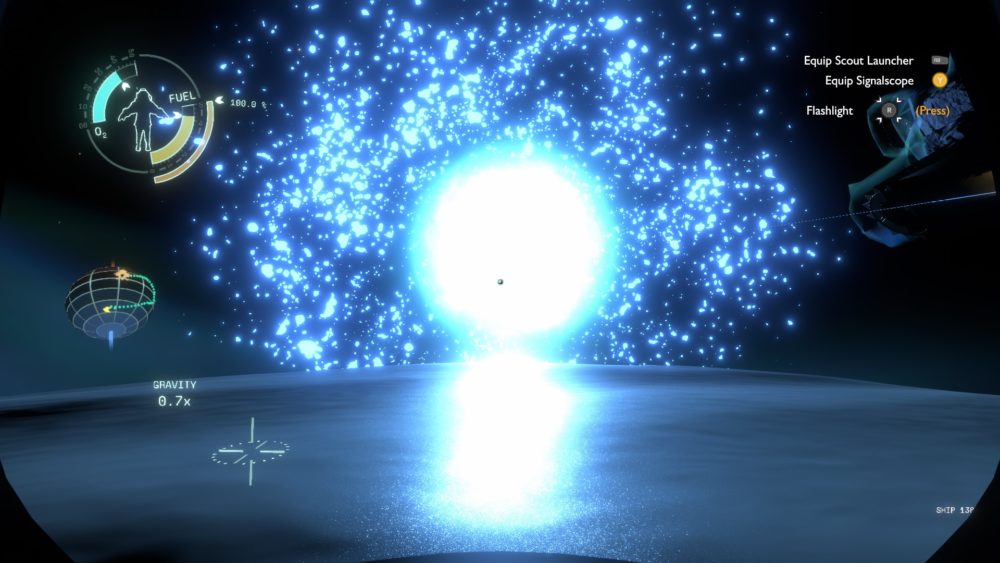 You see, combined with the Ship’s Log which acts as your rumors and hints system in Outer Wilds, these time-specific mechanics can be a little obtuse. Particularly as you make your way towards the end of Outer Wilds’ main storyline.

At several points, I found myself growing increasingly frustrated as I felt like I’d exhausted every possible way of doing something, only to accidentally stumble upon the solution and question how I was supposed to have figured that out myself.

Fortunately, Outer Wilds has ensured that controlling both yourself and your little spaceship on the various planets of the solar system and in its vast nothingness of space are fairly intuitive. After getting to grips with how everything handles — its relative realistic floaty feel of zero gravity, and the heavier pull of other planets — I could never place the blame for my deaths anywhere but on my own silly mistakes.

It can sometimes get finicky trying to translate a Nomiad conversation scrawled on a wall in zero gravity as you’re constantly floating around, but give it time and you’ll begin to get to grips with it all.

I’d be remiss to pen this review without giving a nod to Outer Wilds’ fantastic soundtrack. Its blend of natural instruments, and synth-heavy sci-fi tracks fits absolutely perfectly with the experience to be had. Particularly the track that kicks in as the sun begins to go supernova and your current loop comes to an end.

Every time I heard those synths kick in and seemingly reverberate through my spacesuit, I went into overdrive, frantically trying to tie up every loose end and soak up every tidbit of Nomiad lore I could point my translator at in this tricky new area I’d spent the past 10-15 minutes uncovering, all so that I could update my Ship’s Log and pick up right where I left off all over again.

Outer Wilds is a fantastic title, with novel ideas that both bring its solar system to life, but can also hinder your progress a little too much when you’re nearing its conclusion. Still, if you push through, continue to explore and leave no stone unturned, you’ll reach the end, and there are few feelings quite as satisfying as finally reaching somewhere or solving a rumor you’ve spent ages working on.

It may not have the same scale as titles like No Man’s Sky, but Outer Wilds packs in more interesting lore, narrative, and puzzle-y mechanics in its handful of planets than most other titles out there. If you’re looking for a breath of fresh air and fancy venturing out into space for a laid back exploration and a damned good time, Outer Wilds should be your first port of call.