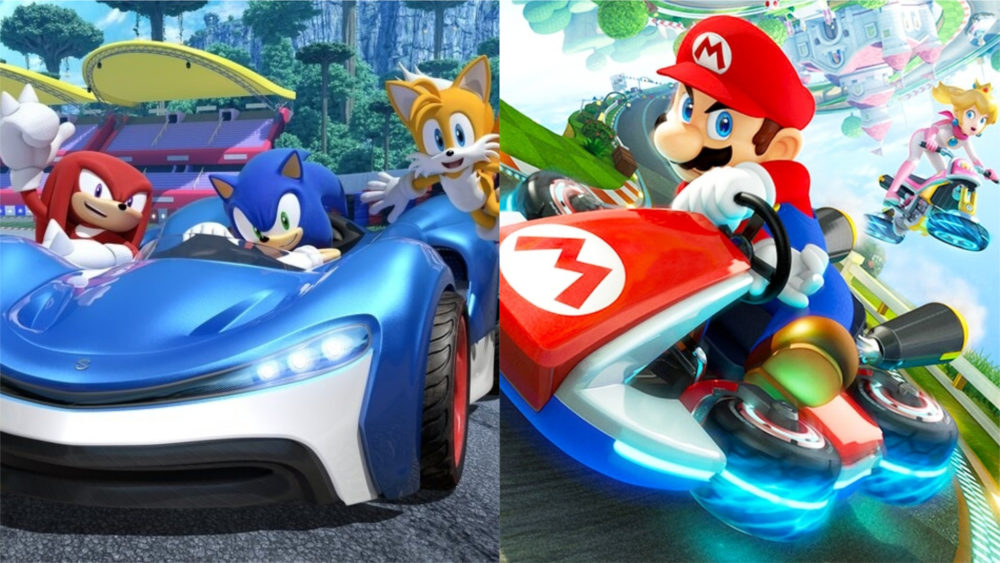 Mario Kart may be one of the most beloved kart racing franchises in gaming history, and the Sonic racing games have arguably been its only true competitor over the last few years. Team Sonic Racing though has brought up the rivalry to a new level and honestly, it has proven itself to be even more exciting by bringing players together to race with each other, not against each other.

In Team Sonic Racing, players race in teams of three and must work together to win each race. You must pay close attention to how your teammates are performing and share Wisp power-ups with them, allowing them to boost off your draft, and skim past you to ensure that they’re on the same page as you in order to rank higher as as a team. Each of your teammates’ points will make or break you.

Every one of those actions fills up the Team Ultimate Boost meter which, when activated, gives you a burst of speed and renders you and your team invincible for a short time.

The only time Mario Kart employed team-based mechanics is in Mario Kart Double Dash, whereas in lieu of racers driving alone, two characters carpool in one kart, with one character behind the wheel and the other using items against their opponents from the back seat. They can switch places at any time.

Team Sonic Racing takes the team-based racing formula to the next level by grouping the characters in five teams of three that can be mixed and matched in multiplayer races, and allowing the player to offer their powerups to their teammates for them to use against their rival teams in order to keep up with the leader and vice versa.

Also, unlike most entries in the Mario Kart series, Team Sonic Racing tries to tell a story that provides justification for the characters to race in teams of three. It’s a brilliant plan, considering that not many racing games before it have been made with as strong an emphasis on team cooperative gameplay.

In Team Adventure Mode, a mysterious alien tanuki named Dodon Pa invites Sonic and his friends to participate in a series of team races, building them hi-tech race cars and offering them as a prize for the winning team.

As the competition intensifies, Sonic and his friends worry that Dodon Pa cooked up the team-racing scheme alongside Dr. Eggman, only to discover later that Dodon Pa sanctioned the races to gather research data for an engine his automotive company is building and generate energy to power it.

On top of that, the customization in Team Sonic Racing goes far beyond what we’ve seen in Mario Kart over the years.

Team Sonic Racing allows players to give each character’s car a cool, sleek feel with multifarious paint jobs and color patterns other than the ones they were assigned, as well as creative vinyl designs from palm trees to shooting stars.

The cars’ appearance can also be upgraded with accessories such as boosters, rims and spoilers that improve stats ranging from acceleration to defense.

Unfortunately, the paint job for all vehicles remains the same regardless of the character you’re racing as, and the effect on gameplay isn’t as impactful as it is in Team Sonic Racing.

Between teamwork, racetrack variety, the ability to switch between characters and teams in the story mode and change the colors of the cars, Team Sonic Racing outruns Mario Kart in every sense of the word at this point in the game.

Sure, there’s something familiar and comforting about Mario Kart, and it’s still an incredibly fun game, but objectively Team Sonic Racing has elevated the franchise to a point where it’s just doing so much more than Mario Kart at this point, and I’m here for it.