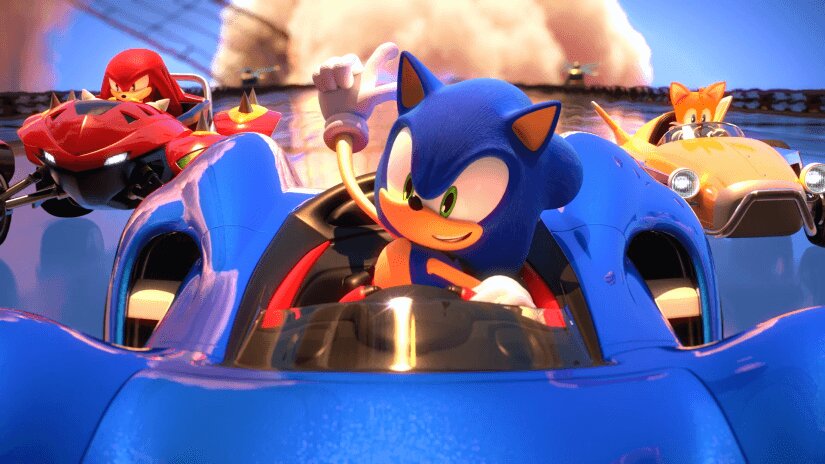 Sonic is no stranger to kart racers at this point, with more than a few under his belt. However, Team Sonic Racing puts an interesting twist on the formula by emphasizing co-op play, pitting four teams of three against each other in races. The good news is, for the most part, Team Sonic Racing manages to be a fun, unique kart racer, even if it’s not the best out there.

More than its modes and trappings, the most important aspect of any racer are the core mechanics, and that’s something Team Sonic Racing has down pat. All the basics are here of course; drifting, boosting at the start of a race, pulling off tricks for boost, etc.

Wrinkles are put in when it comes to interacting with your teammates. The car in the highest place on each team will leave behind a yellow trail, and if you drive in that trail it’ll build your Team Ultimate meter and let you slingshot up to your teammate’s position with boost.

You can also drive by a spun out or slow teammate to give them a boost back up to speed, and everyone can exchange any items or power-ups.

Of course, the winning team is decided by who has the most point, with each placement earning a different number, i.e. 12th place gets 1 point and 1st place gets 15.

Team Sonic Racing has tight and responsive controls, and the team focus makes things exciting while ensuring most players are on somewhat equal footing. The game also groups its characters into three different classes, Speed, Technique, and Power, each of which functions differently.

Speed, as you might expect, has a high top speed but low defense against items, Technique can drive over any surface without getting slowdown, and Power has a high defense and can take hits.

Every team has one of each type, and while the differences aren’t massive, they’re enough to cater to specific playstyles.

For my part, I almost always played a Speed character as I’m all about drifting, pulling of tight turns, and taking chances. I will say, however, that in general the Power characters just feel like they aren’t as good as the other types.

You can, of course, get different parts for their cars, but Power just seems at a huge disadvantage since they rarely have as high of a top speed, or as good of acceleration as Speed and Technique.

That Team Ultimate meter I mentioned earlier builds whenever you Slingshot, Skim an ally, spin out a rival, or exchange items. Once full you can activate a super state for a short time that drastically increases your team’s speed and all three of you invincible.

It’s clearly a mechanic put in to try and give every team a fighting chance, and it usually does just that. However, the Team Ultimate combined with some of the game’s power-ups can lead to some serious rubber-banding, especially if you’re playing against the AI.

At this point, that’s pretty much expected for a kart racer. After all the king of the genre, Mario Kart, has some pretty severe rubber-banding, but it deserves mention nonetheless.

The power-ups of Team Sonic racing do pretty much exactly what you’d expect, from a sudden boost to a homing rocket, and even turning you into a drill that automatically drives and surges ahead. It’s typical kart racer stuff, outside of one called Quake that can be a real hassle to deal with.

Quake homes in on the first place racer and lodges a ton of rock towers into the ground, making that area of the track nigh impossible to navigate without hitting one. It’s effective, sure, but can be a real bummer when you running behind and still run into the rocks.

Team Sonic Racing is split into a number of simple modes, and although team racing is certainly the focus, you can play normal single racer matches as well.

Outside of local play and online, the other main option in the game is Team Adventure Mode. This story-driven mode, and I use story-driven loosely, has you playing across a number of area maps, each of which has different game modes that make up levels.

The strange thing is that you can play through this mode without ever seeing the story at all, and that’s never really explained. When you select a level you can use the X button to play it without the story or the square button to see the story before the level.

Because the option is set on square, I ended up accidentally skipping the story on a bunch of races.

The different game modes featured in Team Adventure are also a mixed bag. The standard races are great, and modes like Traffic Jam are fun, requiring you to dodge a ton of robots scattered throughout the level and drive through gates to get more time.

On the other hand, though, modes like Daredevil can feel like a slog, requiring you to skim as close to posts as you can to get the most points. The real problem is that the point values needed can feel super inflate, and you don’t actually “clear” any level unless you get a silver ranking on it.

Certain areas in Team Adventure require you to collect a certain amount of stars to continue, and each level has a variety of requirements to earn stars. Races always have three starts to earn, while other modes come with two.

While I enjoyed having some diversity to what I was playing in Team Adventure, the story is entirely uninteresting and it drags on a little too long. Still, the modes that work, work well.

There are also a number of customization options available in the game, all of which you earn through Credits. You gain Credits for each and every race you complete and can then use those in a random vending machine to get Mod Pods.

Each Mod Pod costs a measly 10 credits and rewards you with a random car part, one-time boost, horn customization, paint job and more. With 15 different racers in the game, it can take a while to get parts for the racer you really want, but you get credits so quickly that it doesn’t really matter.

Play a couple of races, rack up 60 or so credits and get six mod pods, rinse and repeat. There’s a satisfying enough loop of rewards to make it all worth it.

Saving the best for last, let’s talk about two things; track design and music. Getting the most obvious out of the way, Team Sonic Racing’s soundtrack is a phenomenal mix of some of the series’ best tunes.

There’s a handful of fantastic remixes that back the colorful tracks you race across, from a high-speed mix of “Rooftop Run” to a funky techno mix of “Bingo Party.” The music does a fantastic job of ramping up the high-speed races.

Similarly, Team Sonic Racing sports some really great track design, helping each and every tack to feel unique. Tracks are filled with boost pads, jumps, tight corners, and a ton of unique elements.

Ghostly suits of armor slam axes down in your path, casino chips sit littered in your way, an inferno giant slams his fist down on the track in front of you. These are just a few examples of how Team Sonic Racing injects personality and diversity into its tracks.

While not every track is fantastic, the majority of them do a great job at keeping you on your toes or trying out new things.

Team Sonic Racing is easily the most polished of all the Sonic racing games out there, and it runs without a hitch at pretty much every opportunity.

The team mechanics provide a bit of a unique twist on the genre, even if they make rubber-banding even more of an issue. Despite a few shortcomings, Team Sonic Racing is an enjoyable kart racer that makes great use of its franchise.

If you’ve got a serious itch for some good old racing, Sonic and friends can help scratch it.