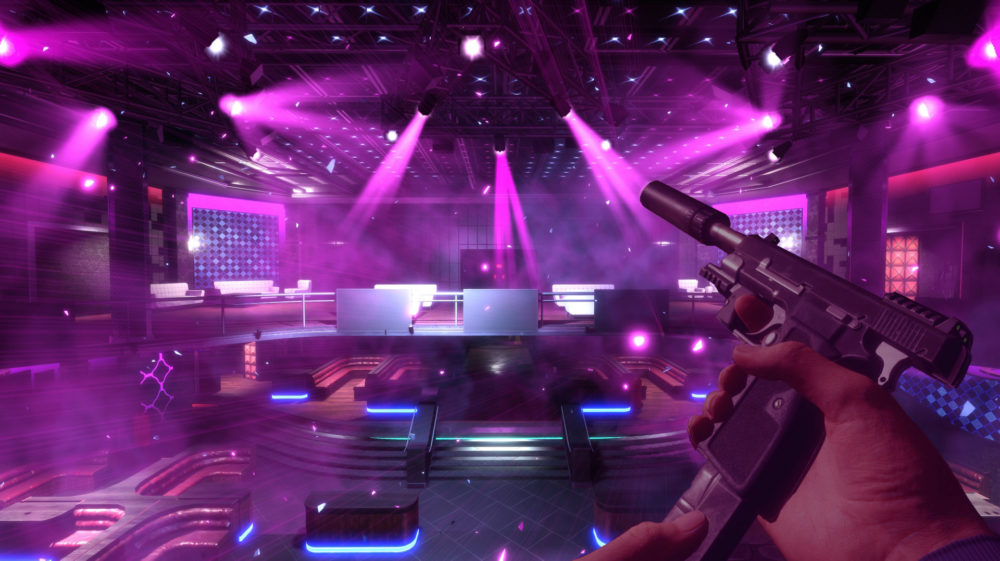 The London Heist, which was part of the PlayStation Worlds launch bundle, was a short but impressive showcase of action in VR. With Blood & Truth, Sony London Studio planned to expand on the promise that was shown by their first title.

Much like The London Heist, Blood & Truth is a first person shooter with a cheesy gangster story full of gruff East Londoners, car chases, and intense shoot outs.

Their new title, though, is far more ambitious. It’s a sprawling, varied adventure that’ll see you leaping out of buildings, climbing across ravines, and even taking to the skies.

It’s no longer an extended demo either. Blood & Truth has an engaging story, collectibles, upgradeable weapons, and a point system for each mission. It’s one of the few full, original games on PlayStation VR and some of its standout moments are the most impressive you’ll find on the system.

The story is pretty straight forward. You play as Ryan Marks, a former Special Forces soldier, and you need to save your family after they’ve become entangled with one of London’s premiere crime bosses following the death of your father.

It’s got everything you’d expect: foul-mouthed henchmen, a double-cross or two, family secrets, and Colin Salmon as a mysterious American agent. It’s predictable stuff, but it’s bolstered by some great acting performances and you’re involved throughout.

Even during story heavy scenes, when the action pauses, other characters glance at you or get right in your face, and it really pulls you into the story.

What you’ll spend most of your time doing in Blood & Truth, though, is fighting bad guys. The shooting is the best I’ve experienced in VR to-date. You start of with pistols that you can add silencers to, and get introduced to snipers and grenade launchers as you go.

Shooting feel fantastic, and quickly making your way through a group of enemies, seamlessly reloading, ducking behind cover, and using your ability to slow down time with ‘Precision Mode’ makes you feel unstoppable.

The action is varied and well paced too. Blood & Truth isn’t just six hours of hallways with two or three bad guys in each room. It’s a fully fledged action movie experience, so you’ll be creeping through a hotel one minute, running across roof tops the next, then shooting guys off bikes and it’s all broken up by some great cutscenes.

There’s one mission early on, set in a mob run hotel, casino, and nightclub that’s phenomenal in both the action and its design.

There are some slower-paced sections too. In the middle few missions in particular, Blood & Truth doubles down on its climbing mechanics.

Using the trigger on each Move Controller to grip, you shimmy along scaffolding, swing through lift shafts, and creep between skyscrapers. It’ll likely terrify anyone scared of heights, but the quality of London Studios’ location design makes these sections a fun way to break up the action.

However, anyone who’s susceptible to VR motion sickness might encounter a few issues. I like to think my stomach has been trained after so much time in virtual reality, but the frequent vertical movements and car chases became a bit too much after about an hour and a half at a time.

It could also do with more of a tutorial, or an alteration to the format of the early missions. Getting to grips with reloading, aiming, and stashing weapons takes a while to nail down. By the end you’ll be throwing your arms around like the special forces guy your character is, but it’s a lot to take in early on.

One of the missions that comes before your get your shooting legs is a car chase in which you have to shoot enemies off bikes as you race towards extraction. Since guys on bikes are obviously moving more, and you don’t have control over the positioning of the car you’re in, it’s difficult to be as accurate with your shooting as you need to be.

The car chase missions are the trickiest in the game, and being thrown into one early on, especially when you’re still learning the mechanics, is tough. I probably died more times in the first half an hour than I did in the rest of the game combined, which can be very frustrating in the early going.

Movement in Blood & Truth is a little different to what we’ve seen in other VR shooters. Rather than giving you the freedom to move and look around, as the likes of Farpoint and Firewall: Zero Hour do, it’s as close to an on-rails shooter as you’re going to get without literally being one.

Each area has set points you can move to with one press of the central move controller button, shown by a little white indicator, and you often can’t move forward until you’ve interacted with what’s in front of you or taken out the enemies ahead.

Kill the enemies and you move on to the next piece of cover or wave of enemies. You can’t rotate your body, so you’re occasionally floating sideways, but the action usually takes place in front of you, so that you don’t have to strain your head or move awkwardly.

In the more cinematic moments, which are Blood & Truth’s spectacular highlights, you don’t have a hand in movement at all. You slowly (or occasionally quickly) move along a path, allowing you to focus on the action.

Surprisingly, those moments aren’t disorientating. Not having to worry about the movement immerses you in the gun fights and the incredible moments.

I wouldn’t want to spoil any individual moments, but there are set-pieces that could be straight out of a Fast & Furious or Mission Impossible movie.

At times it’s incredible, and not having to worry about movement actually helps you marvel at what you’re seeing. It’s these moments that make VR special, and it’ll be interesting to see where Sony London can go with an inevitable sequel.

Immersion is broken sometimes by control inconsistency, though, and it’s due to no fault of the game itself.

There are two ways that you can play Blood & Truth. You can play with a DualShock 4, using the triggers as the way to grab things with each hand, and X to move between positions.

Alternatively, you can use two Move Controllers. The latter is by far the best option, as it makes controlling each individual hand’s movement easier. You can reach out and grab in ways that’s simply not possible with a standard controller.

Every movement is smoother and it feels far more natural to shoot weapons of all kinds with the ability to position your hands differently depending on weapon design and positioning. It makes weapon accuracy and recoil feel far more realistic too.

That being said, the Move Controllers, which are coming up on ten years old tech wise, simply aren’t good enough for the intricate movements that make Blood & Truth so immersive.

When dual-wielding weapons, you need to move one weapon towards your chest so that your fingers can grab a magazine and slip it in the weapon in your other hand.

To carry more weapons, you need to reach to your back or down to your sides to place them there, and you even have to intricately pick locks, Fallout style.

The issue, though, is that it’s often very difficult to be as precise with Move Controllers as you need to be. Their movements aren’t tracked well enough, they’re often jittering around, and any natural light getting into the PS Camera made one hand drift away from you.

I lost count the number of times I tried to place a weapon on my back only for me to shoot a few bullets into the air by accident, or awkwardly move weapons between my hands when I was attempting to grab some more ammo. Fumbling around in the middle of a shoot out is frustrating and breaks the immersion.

It was for that reason that I preferred Blood & Truth’s smaller weapons, because their one-handed accuracy was easier to control than the large assault rifles that require two hands to be even remotely accurate.

I don’t think that the Aim Controller would be the answer either. It’s not compatible here, and it’s easy to see why. While it could make the actual act of shooting smoother, there are so many other actions for you to do, such as crawling and climbing, that simply wouldn’t make sense with its design.

It’s disappointing that Sony is yet to improve the Move Controllers because, while the design of games like Blood & Truth is great in theory, the existing technology makes it difficult for games to work in the way they could.

Blood & Truth is an excellent example of an action movie in VR. Some of the set-piece moments are up there with the best on the platform and it’s the perfect game to show off the power of virtual reality. The only real disappointment comes from how easy it is to see that the experience could be even better if we had better controllers to play it with.