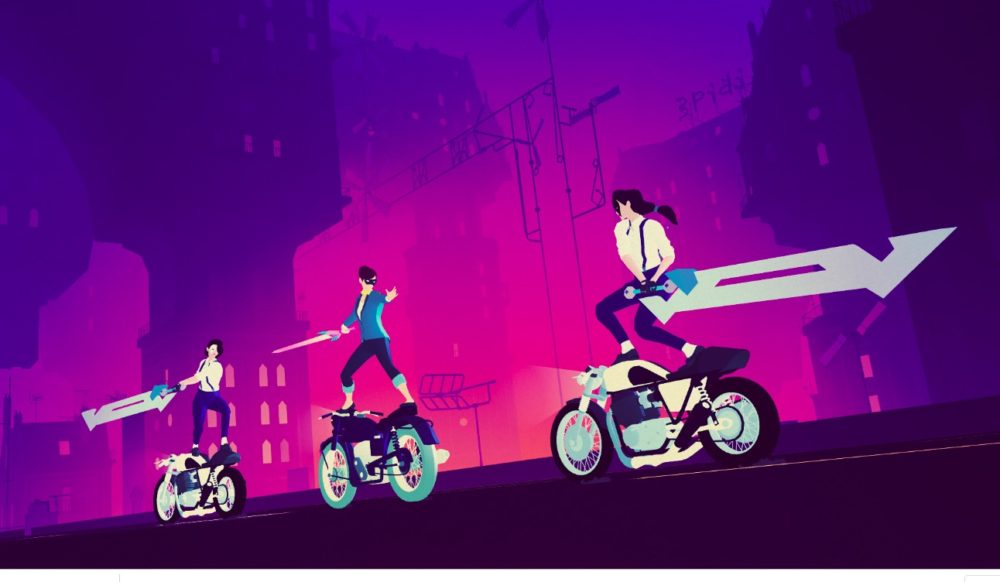 This indie was first announced back during The Game Awards and since I first glanced my eyes at the flashy and stylized trailer, I was down for this pop rhythm motorcycle action game, or whatever it is.

The indie studio, Simogo, calls Sayonara Wild Hearts a Pop Album Video Game, and after getting my hands on it during PAX East, I totally see why they went with that description.

The first segments of my demo with Sayonara Wild Hearts was simple enough and had me controlling this masked woman who is on a skateboard. Going with the electric pop music playing in the background, you have to move left and right to collect little gems that go towards your high score.

The music is super catchy and had me tapping my toes in conjunction with the beat. Once the game gave me access to a motorcycle, that’s when things got crazy. Before you know it, I was chasing a group of women who, I assume, are bad guys in the game. I went toe to toe with each one of them by punching them in the face and chasing after them with my motorcycle.

Everything is timed with button prompts and the game just didn’t stop throwing new gameplay elements one after another, and after playing three or four levels, I just really wanted more of Wild Hearts.

Playing Sayonara Wild Hearts made me feel like a complete bad-ass, sword-wielding, mask-toting, anime girl and I wouldn’t have it any other way.

The game launches sometime in 2019 for Switch and “other platforms.”

After Party is the latest game from the developers of Oxenfree, Night School Studio, a game that we liked a whole bunch here at Twinfinite, winning our 2016 indie game of the year award in a STACKED group of contenders.

As you might imagine then, we were eager to get our hands on After Party, and walked away from our hands-on very excited about its potential.

In Oxenfree, the gameplay revolved around manipulating radio frequencies to find hidden messages and codes, and had a pretty serious & mysterious tone.

After Party is doing a complete 180. While it might look pretty familiar aesthetically, it’s a very different game.

The story takes place in Hell. Two best friends find themselves dead, but have no idea how they got there. Hell isn’t as bad as it seems though.

While there is still scheduled torture sessions for the eternally damned, everyone goes out and parties afterwards. Still, before just simply accepting their fate, the two friends set out to figure out what happened to them, and go off on a quest to challenge Satan to a drinking contest to reclaim their lost souls.

After Party is designed to be much less linear, and the emphasis is on just partying and getting drunk. Drinking certain drinks unlocks different dialogue options that you can use to navigate situations that the plot will throw at you.

There are lots of places in Hell that you will have the opportunity to explore, but you won’t be able to see all of it in one playthrough, and how everything plays out will be very different depending on what kind of drunk you’re rocking, or if you’re just stone cold sober.

After Party is due out sometime in 2019.

Freedom Finger from Wide Right Interactive was probably one of the most surprising games at PAX East 2019. From far away, Freedom Finger just looks like your basic side-scrolling shoot-em-up, but it’s so much more than that.

Yes, you control a hand that shoots enemies and objects with a middle finger gun, but there’s a lot more going on here than just that. Since you are a hand, you have the ability to physically grab other enemies and ships to then use their weapons as your own or you can just throw it, destroying a line of enemies in the process.

Each enemy can be used as a different type of weapon and it was so much fun picking up random things to see what they did.

Oh, and did I mention that every single level is based on an original heavy metal rock song? The unique soundtrack determines how each stage plays out as the enemies and their attacks are synced to the tune of the soundtrack.

Freedom Finger is a comical, exciting shoot-em-up that had me laughing thanks to all of the crazy things that you can do with just one hand. The developers were also really funny and had me play an extra hard level that was nearly impossible to beat.

They prefaced my play session with a promise that if I were to complete the level, myself and everyone watching me play would receive a free code for the game. With the pressure on and all eyes on me, I (of course) embarrassingly lost the challenge, leaving everyone disappointed.

Still, Freedom Finger is really awesome and is planned to release on PS4, Xbox One, and PC in 2019. The developers are also working on getting the game on Switch, but they might have soon trouble with the apparent middle finger that the game is based on.

Cyber Shadow is a new retro-styled 2D platformer that is being published by Yacht Club (Shovel Knight) and developed by Mechanical Head Games.

If you’ve ever played older sidescrollers or platformers like Mega Man, Contra, and Ninja Gaiden, then you’re probably familiar with how Cyber Shadow plays.

Cyber Shadow is beautifully animated with fluid movements that are frantic, fast, and yet, enjoyable. You play as a Ninja named Shadow that is attempting to discover why there are synthetic lifeforms taking over the world around him.

You can slice through enemies quickly and the game pushes you to go fast, avoiding enemies while traversing platforms and other environmental hazards.

The game feels much less difficult and punishing than Yacht Club’s Shovel Knight so if you’re someone who didn’t like the feeling of losing money or progress when you die, Cyber Shadow seems to hold your hand a little bit more.

Cyber Shadow currently does not have a release date, but it will be coming sometime in 2019 for Switch, Xbox One, PS4, and Steam.

Dead Cells – Rise of the Giant

In anticipation of the newly released Rise of the Giant DLC for Dead Cells, I picked up the game on Switch last month and to no surprise, I fell in love with the fast-paced roguelike.

Every run in Dead Cells makes you feel like you are progressing even though you might be dying over and over again. Enemies you defeat leave behind Dead Cells that you can use to unlock new weapons, upgrades, and health potions.

I got to check out the Rise of the Giant DLC pack that was just released on PC during PAX East 2019 and even though it’s completely free, this update adds a ton of stuff that makes Dead Cells worth going back to, or even picking up if you haven’t played it yet.

Rise of the Giants introduces new skins for your character, new weapons, new enemies, new skills, a new boss, and even a new level for those that have somehow managed to complete the main campaign.

I played the new level and interacted with some of the new enemies and weapons, and just like the main game before it, Rise of the Giants feels just as satisfying and exciting.

I even managed to defeat the new boss, thanks to my excellent Dead Cells skills, and quickly made my way around the environment. One of the new weapons that I fell in love with was a one-shot bow that killed literally everything in pretty much one hit. The downside to using it was that I had to retrieve the arrow before I was able to use it again.

Rise of the Giants is more Dead Cells and if you feel like the content was lacking in the main game, then this content pack will surely change your mind.

Dead Cells – Rise of the Giants is now out for PC. There has not been a release date for the DLC announced for the Switch just yet, but you can still download “vanilla” Dead Cells on Switch if you like.