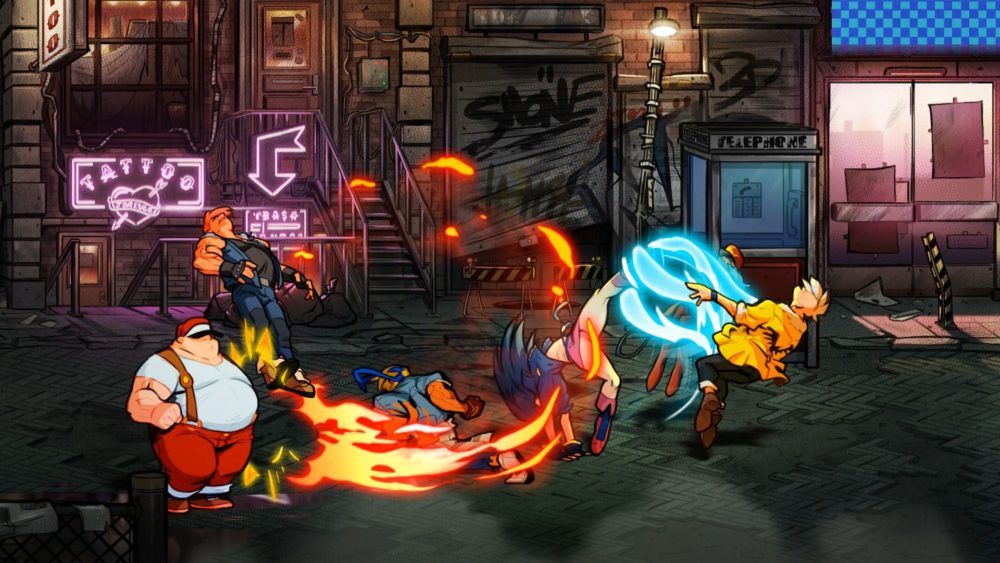 Streets of Rage is very near and dear to my heart. When I first heard that Sega was finally trusting another company (French developers DotEmu) to create a new entry into the series, I was elated. Seeing how it looked in screenshots and trailers though caused some old-fart purists like myself to pause.

It didn’t look like the game we remembered. Why mess with a good thing when we saw how well-received Sonic Mania was?

However, after getting to go hands-on with Streets of Rage 4 at PAX East (read our preview here), and chatting with a group of developers from DotEmu, a lot my worries have vanished.

Without further ado, let’s dive right into our interview with DotEmu featuring our burning Streets of Rage 4 questions following our PAX East demo.

Editor’s Note: This interview was lightly edited for clarity.

Ed McGone, Editor-in-Chief of Twinfinite: While the game is a retro-inspired sequel, it’s a game that is being developed in 2019 obviously, so could you walk us through some of the modern conveniences that players are going to notice and enjoy?

DotEmu, developers of Streets of Rage 4: Well, mainly they are going to notice that there is a new art style, [and] slowly realize that this is faithful to the originals.

At the same time, we’ve added a few different [things] that makes the game more modern. You have new moves [Star Moves, air specials] you can throw your weapon and grab it in the air while it’s bouncing.

The special move, it’s used to [decrease] your life in the older games. Now, you can regain that life back while hitting enemies without being hit.

It’s these little details that make the game more accessible an audience of today because the game is less punishing with this feature, but still, this is the original game at its core.

Ed: The art style is getting a lot of attention because of how different it looks from the Genesis games. Was this deliberate to deviate from the older games and make it stand out more? Or was it out of necessity to kind of play to the strength of the art team?

DotEmu: Well first and foremost, it was the strength of these artists to make 2D traditional animation and when I started to draw concept art of the game, I started by doing what I wanted to see.

I didn’t know that it was possible to have the license. So at the end of the day, some people are going to be disappointed because some people want pixel art, or some people want 3D, or they find [the current art style] too bright…

The thing is, you have to be faithful to the original and also try to bring something that is you and also suits the game well.

Ed: I’ll admit, at first I wasn’t thrilled with the art style, but after playing it, it does look a lot better in person and in motion…

DotEmu: I totally understand the difficulty to project yourself in a new game for a beloved franchise. But I think when people play it they are going to see that it is a direct follow up to the games they love.

Ed: What do you think for you is the most important aspect that felt needed to feel as close to the original games as possible?

DotEmu: When we made the game, we tried to work on the original feeling… the first thing to get right is that original feeling. So we had a strong base [referencing the original games] to build upon. Another thing is the music because we think it’s a very core part of the experience. We have to have particular care [towards] the music. We don’t have anything to announce yet but it will surely be great.

Editor’s Note: The music during the demo we previewed was placeholder tracks from the original games.

Everybody knows that the music is one of the best things from the games, so we want to really make the best soundtrack possible.

Ed: How nerve-wracking is it for you to take on such a beloved franchise?

DotEmu: When you start, you’re like an excited teenager. I’m going to work on Streets of Rage! And you try to put everything that you have in mind for it. And at the same time, in the back of your mind, like “oh… lots of people love Streets of Rage” and you have to confront what is your vision of the game to what the vision of the fans is, and it’s a very thin line.

There are a lot of ways you can go… but we really try to be as faithful as we can be and also bring something new.

PAX is the first time the public can play the game. We are relieved because we see the smiles on their faces.

Ed: Did the success of Sonic Mania, a similar kind of revival project, influence the team in any way?

DotEmu: It’s not the same. It’s based on a big license from SEGA… but Sonic Mania is a direct follow up to the traditional Sonic games, with beautiful pixel art and beautiful level design. Streets of Rage 4 is leaning more towards a new direction but at the same time… it’s just not the same kind of project in my mind.

Ed: How heavily are changes to the original formula debated internally?

DotEmu: It can be nerve-wracking because we don’t agree on everything. We [want to] go in the same direction, but sometimes there are things that trigger some people, but don’t trigger me… or the other way around.

So we have some debates but most of the time the end question is: Is it good for the game? Is it faithful to the universe of Streets of Rage? It’s a complicated matter.

It’s what happens when you are passionate. You have discussions obviously, but every time we end up finding something better for the game.