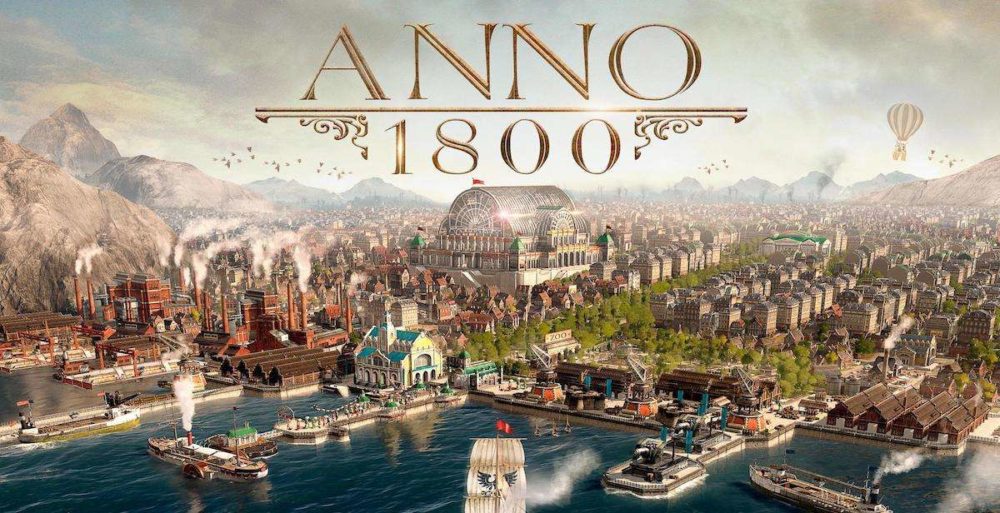 The Industrial Revolution was a period that brought about many of the modern conveniences that we take for granted today, and it also brought about a whole new era of misery for the working class. Workers of the era had to endure long hours of dangerous labor for next to no recompense, forced to spend their lives in awful drudgery with little prospect of respite and oppressed by wealthy industrialists.

In Anno 1800, the latest in the long-running city-building series from developer Blue Byte and publisher Ubisoft, you can live out the fantasy of industrialist for yourself. I wouldn’t recommend it, though, because it actually turns out that a well cared for and managed workforce are far more productive… and apparently willing to pay more in taxes, too.

In this iteration, you play the role of a director of a trading company, and your goal is to colonize an uninhabited island, tear its natural resources out of the ground and ruthlessly exploit them for profit. There are other islands in the local vicinity, some of which will be occupied by AI-controlled opponents, who can be traded with or warred with as you see fit.

Anno 1800 also has the option for multiplayer, so these could be actual players if you so choose. Eventually, you will have multiple settlements on multiple islands, and even some on entirely new maps, all of which run seamlessly and concurrently, which is a truly impressive technical feat.

Each AI has its own personality and play style, and are based on stereotypical 19th-century archetypes that range from charming to somewhat problematic. You have the smarmy industrialist, the grizzled admiral, an emissary from the Chinese emperor and a feisty former slave, to name a few. I was playing on standard difficulty, and they posed a decent enough challenge. The admiral, in particular, neglected his own people but filled the ocean with frigates and had me besieged on my starting island.

The game, simply put, is a stunning graphical achievement. It’s beautiful, with a strong Victorian design aesthetic to the ships and structures, even down to the clothes your citizens wear as they prance through the streets. Watching your settlement grow from a quaint village of fisheries and potato farmers to a thriving city-state replete with theaters, cathedrals, zoos and the other trappings of modernity is a sight to behold, and requires quite a lot of work to achieve.

In the simplest possible terms, this is done by introducing new classes into your society. You begin with only farmers, simple folk who require brandy, fish and work clothes to live fulfilled and happy lives.

But here is where the fun begins: you will need potato farms and distilleries for the brandy, wharves for fishing, and pastures for sheep and clothiers to turn their wool into clothes. All of the requisite structures require lumber, which needs to be processed at a sawmill before construction can begin, and everything requires adequate storage and distribution to be effective.

On top of that, your farm folk will need their houses connected by roads, and they also need access to a market place and a pub to increase their happiness. Firemen and police are also needed to keep everything running smoothly. Increase their happiness enough, and you can upgrade them into the more productive, but also needier, worker class. You now have access to a whole suite of new buildings that will cater to the needs of this particular class, and the entire thing snowballs on and on, eventually requiring you to send expeditions to the new world in search of luxury goods.

There are five classes of citizen in total, and dozens of structures that create increasingly specialized industries for your increasingly effete population. It’s a fascinating system that is as deep as the Mariana Trench and allows for endless replayability. You can add in win states, things like destroying your opponents militarily (there is naval combat, its fairly basic though) or achieving economic or cultural milestones.

Or you can just play endlessly, designing a beautiful and self-sustaining society ad infinitum.

Incredibly complex, sometimes bewilderingly so, Anno 1800 is going to scratch a very specific itch for a very specific kind of player. I wouldn’t recommend it to everyone, but if you have that special kind of damage that I do then Anno is going to keep you up long into the wee hours of the morning… obsessing over the placement of warehouses for maximum coverage and agonizing over how needy artist-types can be, gosh darn it.

There is a campaign, which is essentially just the sandbox mode but with some cutscenes thrown in. It’s fine, but it just doesn’t do enough to teach you how to succeed. Like, it’s important to know how to build certain structures, but more important to me in this kind of game is where and why, which I had to learn myself through some grueling trial and error. Sure, there are text boxes galore, but I found I was better off just jumping right in and experimenting.

I’d consider myself a pretty serious strategy fan, but the learning curve to setting up a successful settlement was incredibly rough for me. Even on the easiest setting, I had to restart several times before I felt like I truly understood what I was doing, as minor mistakes in your initial city planning can have some pretty major effects later on. This usually takes the form of crippling bankruptcy, rioting citizens and general anarchy.

If you are like me, new to the series but genre-savvy, then you are looking at around 10 hours or so before these systems really click. And to be honest, I don’t know that I was really enjoying myself in those first few hours. It can be quite frustrating to see your finances fall into the red, and have no real way of getting them back out again aside from demolishing your settlements and essentially starting again, or just actually starting again as was my case.

Now, some 30 hours deep, I love it. It’s fascinating and tense, and I can see the strategies and layouts required to succeed. I can see myself playing Anno 1800 for years to come, whenever I get that building-sim itch that I’ve been meaning to see someone about. As there are continents on the world map currently inaccessible, I would imagine Blue Byte will be adding to the game, allowing for further complexity and replayability.

Certainly not for the casual fan, Anno 1800 is a glorious exploration of a glorious age. It is a technical achievement for strategy gaming that goes unrivaled, and while its complexity may be a roadblock for some, the return on your investment would make even the greediest fat cat smile.