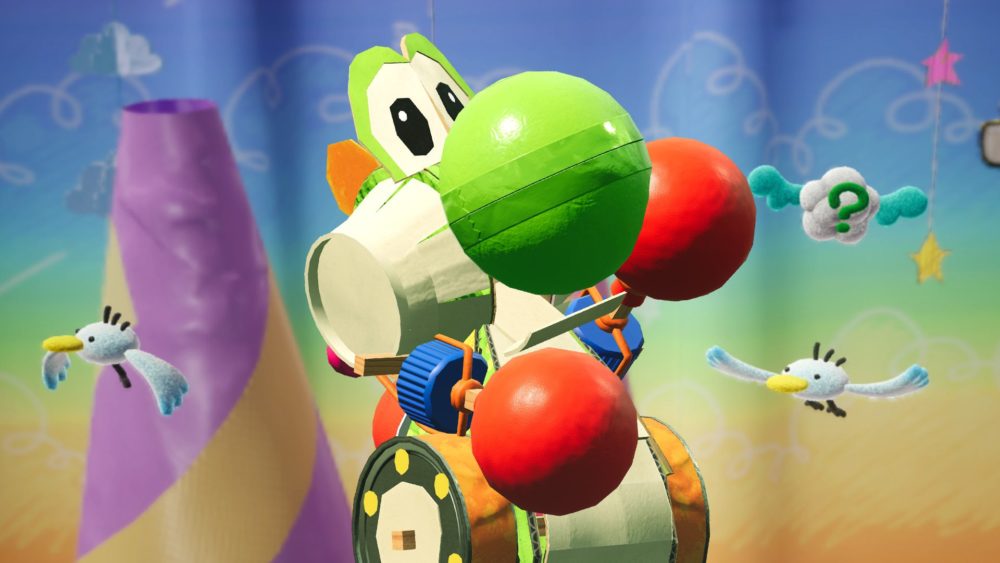 With every new Yoshi release, it seems that critics and fans alike always seem to appreciate Yoshi with a sense of kid-like enthusiasm, favoring the cute art styles over the actual gameplay, since it was always super easy to beat the game.

Yoshi’s Crafted World sort of falls into that trap but tries to up the aesthetic and the difficulty level, which is a tick in a more positive direction in that regard, but is still ultimately a Yoshi game.

In typical Yoshi fashion, Crafted World is a 2D platformer that sees the Yoshi fam set out to collect five pieces of this important star that will help these Yoshi’s escape a wooded area in which in they are trapped in. But, of course, Bowser Jr. and Kamek are up to no good and end up having to rumble with Yoshi throughout the story.

As you can guess from just reading the title of the game itself, Yoshi’s Crafted World features an amazing, beautifully imagined world. Everything you see, from world to world, contains objects, enemies, and backgrounds all completely made from everyday materials.

In the underwater-themed area that you progress to towards the beginning of the game has flatfish laying all around the ocean floor, but they’re not real fish of course. Instead, they are constructed with paper plates, googly eye toys, and pipe cleaners.

This is just one of the many examples of the handmade crafted aesthetic that Nintendo introduces to us throughout Yoshi’s Crafted World. Standing next to Kirby’s Epic Yarn and Yoshi’s Woolly World, Crafted World takes the cake for being the most unique and creative of the three.

Traveling through the dozen or so worlds in the game was a visual treat, each and every time. From the pirate-themed area and the outer space level to the haunted mansion, the stages were exciting and brought me joy.

I was oohing and ahhing at every turn, every time I saw a cool object in the background or noticed a unique set change or an adorable monster. There’s so much to look at in every level, so I definitely recommend taking your sweet time through each world, because you’ll miss a secret item or two, in which there are a lot of.

In every single level in Yoshi’s Crafted World, there are about six side objectives for you to complete while fluttering around with your eggs. You have to find six flowers, 20 red coins, and 100 gold coins. Once you beat the stage once, you can play the stage on its backside with the camera flipped around to search for three hidden Poochy’s.

There are also hide and seek missions to complete and other hidden items to find. So, yes, there is a lot to do if you plan on collecting every little thing in this jam-packed adventure.

However, if you want some help from a friend, then I have some bad news for you. Okay, so, there is a multiplayer feature in Yoshi’s Crafted World that lets you play with a friend but locally only. Just share a Joy-Con together and they can help you collect all of the secrets, sounds good right?

Well, I’m sorry to say this, but the multiplayer in Crafted World is not designed well. In order to have fun playing this with somebody, you literally can’t go near one another. It’s very easy to accidentally lick your partner, resulting in them being inside of your mouth to then lose all of their eggs!

And listen, eggs are not that easy to come by. I found myself hoarding as many eggs as I could because who knows where the next egg block or enemy could be. There were times when I had to run back towards the start of a level, just so I could hit this one suspicious spot to check for coins.

But yeah, also in multiplayer, if you just run into your fellow Yoshi, then you end up sitting on top of them. It’s cute and adorable for the first two seconds, but after that, it just gets annoying and messes with the fun.

After playing just one level with my multiplayer partner, I knew that this was not going to be an enjoyable experience with others. But, once I got the game to myself, it was much more relaxing and less frustrating. 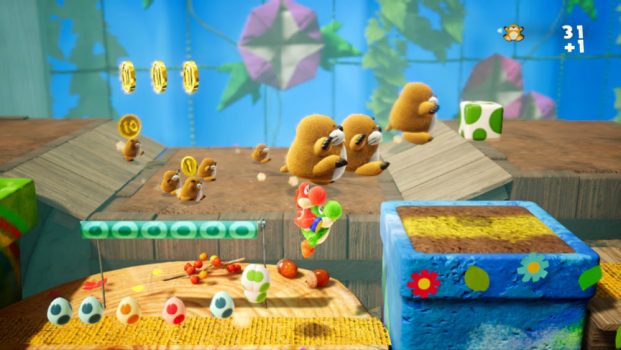 There are also costumes to purchase in Crafted World, a lot of them actually. They are all made of cardboard of course, and Yoshi will wear them by holding the box over the body, not entirely fitting snugly. It’s very charming to see them dressed up, but the boxes kinda make Yoshi feel bigger than he is, making the jumps feel heavier and less fluttery.

It wasn’t a huge change, but after playing with the costumes on for a while, I decided to leave them be. I mean I still collected the costumes for completion, but alas, I kept them in the closet to gawk at later.

All of that said, even with the below average multiplayer, everything else that Yoshi’s Crafted World does is done oh so right.

Nintendo went all the way with the cardboard aesthetic and even after playing the game for just five minutes, anyone with a sense of style can understand that this game was made with love and hand-crafted for the player to have some eye candy regardless of where they are looking.

There’s also tons of replayability; it took me about seven to eight hours to finish the main story of Yoshi’s Crafted World, with an awesome boss fight in the end if I may add.

After you’re done with that, if you want to collect every little thing that I mentioned above, you might find yourself throwing eggs and taking names for over 20 hours or so.

There is even a difficulty spike after you beat the game as it unlocks a special world with a couple of levels that require a high level of experience. There’s not a ton of levels to play and they don’t introduce anything new to you but they are at least more challenging, especially for a Yoshi game.

It’s a shame that a Nintendo game couldn’t pull off excellent multiplayer like they usually do, but the rest of the package here is tied up nicely with a big red bow, made of paper of course.

Yoshi’s Crafted World is a treat to play and is highly recommended for any Yoshi fan out there, even for the ones who skipped out the most recent entries. Believe me, this may look cute, but Crafted World may fall into being one of the most entertaining and visually appealing games that the Switch has to offer.