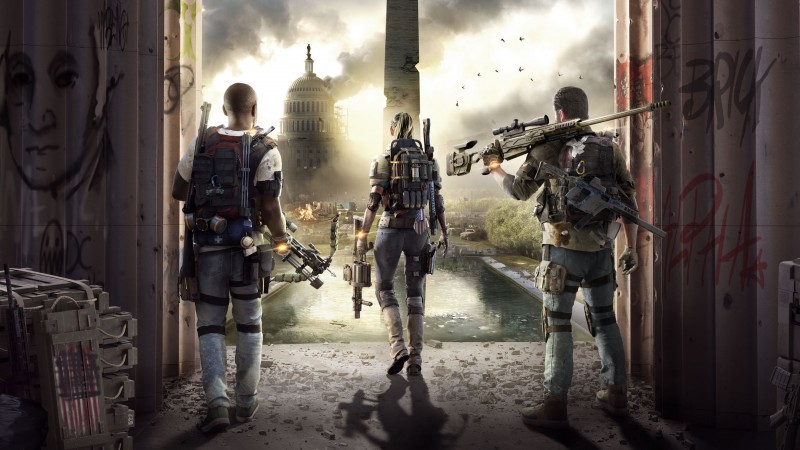 I’ve spent the past three days playing The Division 2, and doing almost nothing else at all. I am exhausted. But in a good way.

Right off the bat, The Division 2 is already clearly a marked improvement over Ubisoft and Massive’s first foray into the looter shooter genre. Developed with the end game in mind (as the developers have claimed multiple times), this game feels like a complete package that promises to offer you at least tens of hours of playtime in just the first few days. And the raid isn’t even out yet.

I’ve sunk about 25 hours into the game so far, and I’m finally nearing the end of the main campaign. At a glance, it’s obvious that the open world of The Division 2 is already so much more fleshed out than Manhattan from the first game.

While the sun-soaked streets of Washington DC aren’t quite as visually appealing as New York’s snowy cityscape, the world itself feels alive, and it’s absolutely littered with a crap ton of things to do.

The first game already laid out the groundwork with roaming patrol groups and territorial areas that you could take over, but The Division 2 takes these concepts and fleshes them out even further. Now, there are Control Points to liberate, which are essentially the equivalent of outposts in Far Cry, except without the stealth.

Taking over a Control Point requires you to enter the area, fire a flare to call for backup, then clear the area of enemies. You’ll then have to defend it from an incoming enemy attack before you’re finally allowed access to the supply room, which rewards you with an obscene amount of loot.

Liberating a Control Point is an activity that’s already fun enough by itself, just by virtue of how varied the layouts are. Some are underground, some are centered around a sinkhole, while another might just be a shopping mall.

Aside from just looting the area and scooting off, though, The Division 2 also introduces a new upkeep mechanic where you have to supply food and water to these Control Points to maintain them.

Doing so allows you to actually keep the Control Points, while also contributing to district objectives that will reward you with even more loot, blueprints, and experience.

Every little activity you take part in is helpful in one way or another, which is an incredibly important core element of what makes a looter shooter game great. Massive understands this, and it shows in The Division 2.

Beyond all of these open world activities, we’ve got the menacing Strongholds, which are an end game activity I’ve yet to reach. There’s the Dark Zone, which I’ve only explored minimally, but seems to work in the same basic ways as in the first game.

Then, there’s the new Conflict PvP mode, for players who’d rather dedicate their time towards gunning down others in a controlled setting.

In short, despite already having put in close to 30 hours into this game, I’ve barely scratched the surface. What I can tell you, though, is that The Division 2 does seem to still suffer from boring mission design, especially as you’re barreling through the campaign.

Mission levels in The Division 2 continue to maintain that static formula of sprinting through a hallway before coming up to a bigger room or open area, where you must then clear out mobs of enemies. Enemy types aren’t all that varied between the different factions in the game, and even the elite foes can feel a little tiresome to fight after a while.

Not to mention the fact that elite enemies can still feel like bullet sponges that just absorb anything you throw at them. It’s worth noting that every enemy has a weak spot (it’s always the red part on their bodies), and the same goes for yellow-bar elite enemies too. Shooting their weak points will remove their shields completely, making them extremely vulnerable.

However, certain bosses that you encounter during story missions just have an insane amount of health that’ll require you to pump them full of bullets for a good five minutes or so before they finally go down.

I’ve already found a story mission where the best current strategy is to cheese a bullet sponge boss by luring him into a despawn area and just pelting him with bullets from there, so that should be an indicator of how much HP these enemies have.

From what I’ve seen so far, though, The Division 2 certainly doesn’t lack content at launch. The campaign alone will likely take you 30 hours to clear, and then the real game begins, where you finally pick a Specialization and start farming World Tiers for better loot.

I’ll have more to say about the game once I’ve had some time to play around with the Strongholds and check out the end game grind.