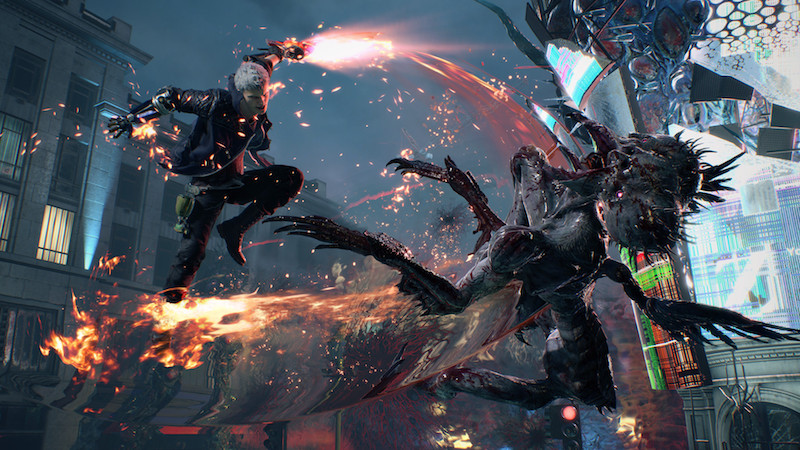 One of the most exhilarating parts of Devil May Cry 5 is pulling off a SSS rank combo in combat, and that’s why we’re here to help you achieve one yourself with a guide on how to perform a stylish rank SSS combo easily.

The highest style point ranking that can be achieved in Devil May Cry 5’s combat segments, a SSS Stylish Rank requires careful understanding of the game’s mechanics and weapon combos to pull off.

Not only do you have to use as many of the combos available to you as possible, but you also can’t get hit by any enemy attacks and must dodge incoming attacks with split-second precision.

It’s difficult to be sure, but it becomes a whole lot easier if you keep these tips strategies in mind.

No matter what character you’re playing as, it’s important to keep track of what combos you can use with your melee weapons, how many times you’ve used them, their range and how to use them all without getting hit by enemies.

Once you do, you can approach each fight the same way.

Wait for the enemies that spawn to draw in closer. Then, use your basic combo to completion.

After that, use the different variations of your weapons’ combos. Be sure not to repeat strikes or combos, with at least two combo variations thrown in before you start to recycle through your combos again.

If an enemy gets in too close, try to dodge as close to their striking you as possible and pepper them with gunfire to keep your Stylish Points up.

This may require practicing a bit, but once you do you can stick to this same general pattern to rack up stylish points quickly and efficiently.

How to Get a Stylish Rank SSS Combo as Dante

As for how to get a Stylish Rank SSS Combo as each character, let’s start with Dante.

To pull one off, simply follow the pattern listed above. Once you’ve cycled through all of the moves for your main melee weapon though, switch over to your secondary melee weapon.

This can be done at will and all of its combos will provide the maximum yield of Style Points upon their first use. Likewise, your main weapon’s combos will yield Style Points again after you’ve used at least two combos with your secondary melee weapon.

So long as you pay attention to your range and avoid getting hit by enemies, you should be able to use this advantage to achieve SSS Ranks in combat as Dante regularly.

How to Get a Stylish Rank SSS Combo as Nero

Getting a SSS Style Ranking as Nero is a bit trickier, but still easy to do once you know what to aim for.

In addition to using the above strategy, pay particular attention to how close enemies are to each other and whether you can force them into a corner.

If you can, put on the pressure and group as many enemies as you can in a corner of any given arena. Once you have, launch them up into the air and execute an ariel combo.

So long as the attack connects, it should give you a nice boost to your Style Ranking, with the boost increased based on how many enemies are hit.

How to Get a Stylish Rank SSS Combo as V

Last but certainly not least is V, and Achieving a Stylish Rank SSS combo as him comes down to micromanaging his demons and their attacks.

While playing as V, you can command three different demons with their own attacks and move sets. These can be used interchangeably, but if you want to get a SSS Rank fast you’ll need to use them at the same time.

This can be done by pressing the X and Y buttons on Xbox One, or the Square and Triangle Buttons on PlayStation 4, at the same time.

This will send two of V’s demons, Griffin and Shadow, out at the same time to attack enemies in unison, effectively doubling your stylish point haul.

While doing this, you can also have your Devil Trigger active to summon Nightmare, a third demon that attacks enemies on its own.

While only usable while your Devil Trigger meter isn’t depleted, he can still greatly increase the rate at which you gain Style Points.

As stated earlier though, using this method requires micromanagement. Keep track of whether you need to back off and let your combos cool down, and throw in some gunfire or dodges if you’re strapped for a way to refresh your Style Point yield.

It can be a lot to take in at first, but before long you’ll be well on your way to maximizing your Style Ranking in every battle.

That does it for how to perform a stylish rank SSS combo easily. For more on Devil May Cry 5, check out our guide wiki for more tips, tricks and secrets.

Sky Beneath Gets First Gameplay Trailer

The 4th of July in Animal Crossing Didn’t Have Any Fireworks, but I Made the Most of It
To Top