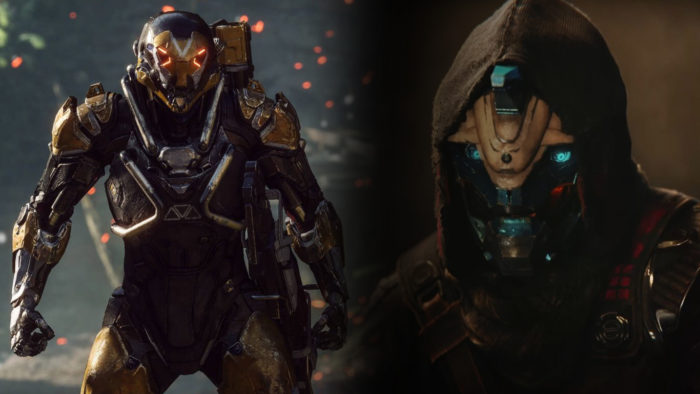 Touted as the “next big thing” from esteemed developer BioWare, Anthem was all set to be one of the most anticipated and hyped up game releases of 2019. It featured an online multiplayer shared world system, and looked to have a similar end game grind loop to other MMO-like games such as Warframe and Destiny.

Even with the prestige of the BioWare name, however, Anthem hasn’t delivered, at least not at launch. And in failing to do so, it swivels the spotlight onto how absolutely incredible of a feat it has been for Destiny to remain relevant throughout the past four+ years.

Since 2014, the Destiny franchise has gone through several ups and downs. We’ve also seen the release of online looter shooter games like The Division, Fallout 76, and now Anthem, all games which were perceived as potential Destiny-killers.

Even so, Destiny has continued to prevail, precisely because despite its many missteps, Bungie still managed to nail down all of its cornerstones and fundamentals from day one. Which isn’t something you can say for Anthem.

As a game that was released four years after the original Destiny, BioWare should’ve been able to learn from Bungie’s mistakes and crafted a compelling looter game that was firing from all cylinders. And yet, it’s astounding to see the game so flawed in so many basic ways that you wouldn’t have expected.

At launch, Anthem’s basic menu systems are a complete, clunky catastrophe. The simple act of accessing your inventory while in the open world is straight up impossible, and when you’re in Fort Tarsis, you’re forced to walk to a certain spot, press a button, and sit through a loading screen to see it.

The act of changing your weapon loadout in Anthem is also straight up not something you can do in the open world. And again, you can only do it in Fort Tarsis, where you must walk to the Forge, press a button, and sit through a loading screen.

If the core appeal of Anthem is supposed to be the prospect of getting better loot as you progress, then the game utterly fails at indicating to you the items you’ve acquired during a mission. And that’s not even to mention the fact that actually getting to your loot after you’ve completed a mission is an unnecessarily long process.

Compared to Anthem’s non-existent inventory system, Destiny allows players to take a limited number of weapons and gear pieces with them. Menu-ing is done with a simple tap of a button, and re-equipping your stuff is just a matter of hovering over the relevant slots and swapping out whatever you want, whenever you want, even in combat.

Perhaps more important is the fact that Destiny disguises its loading screens well by giving players the ability to do all the menu-ing and inventory spring cleaning while loading into the instance.

Anthem’s problem wasn’t its load times because, let’s be frank, Destiny 2 also has some pretty disgusting load times even today, as I wait to join a Strike in progress. The problem with Anthem was being forced to sit through generic and boring load screens for even the most basic things, and not being able to do anything while waiting.

Destiny gets around this issue by keeping players grounded in the game world while sitting in orbit, watching as ally ships join your matchmaking queue. If you don’t like that, you can use the time to dismantle your unwanted gear, check your current bounties and Milestones, check the map for ongoing Public Events, or spy your teammates’ equipment.

In Anthem, you just wait.

And we haven’t even gotten into the meat of the gameplay yet: the endgame grind. At the moment, Anthem’s endgame consists of chest farming and repeating Stronghold missions. Outside of that, there isn’t really anything else you can jump into. There’s no PvP to speak of, no Exotic quest equivalents to chase down.

By no means am I saying that Destiny is the perfect looter shooter game, but comparing Destiny to its direct competitors, you can’t deny that this game has its ducks mostly in a row.

Destiny 2 launched with several problems and even took a few steps backwards from the peak that was Rise of Iron, but the important content was there. There were a good number of Strikes to farm, there was the weekly Nightfall, there were a plethora of Adventures and Heroic Public Events to check out. And if none of that appealed to you, there was the Crucible.

A week later, there was a Raid to play in Destiny 2. Give it a bit more time, and the faction rally started, along with Iron Banner and Trials of the Nine. And we haven’t even talked about how fundamentally awesome Destiny’s basic shooting gunplay is, and how even that can be enough to keep the most casual players coming back every now and again.

BioWare has laid out a whole roadmap of planned features coming to Anthem soon, but the truth is, this game isn’t going to become a “Destiny-killer” anytime soon. It’s obvious that Anthem has yet to reach its true potential, and there’s still a chance it could eventually become a very good looter shooter game that might give Destiny a run for its money, but who knows if, or when that’s going to happen?

The fact of the matter is that Anthem was released as a bit of an unfinished and incomplete game. And in a market where companies have had time to study all of Destiny’s unfortunate missteps and lowest lows, that shouldn’t have happened at all.

Anthem needs to step it up, or Destiny’s just going to continue stealing all its players back once the novelty of the “next big thing” has worn off.