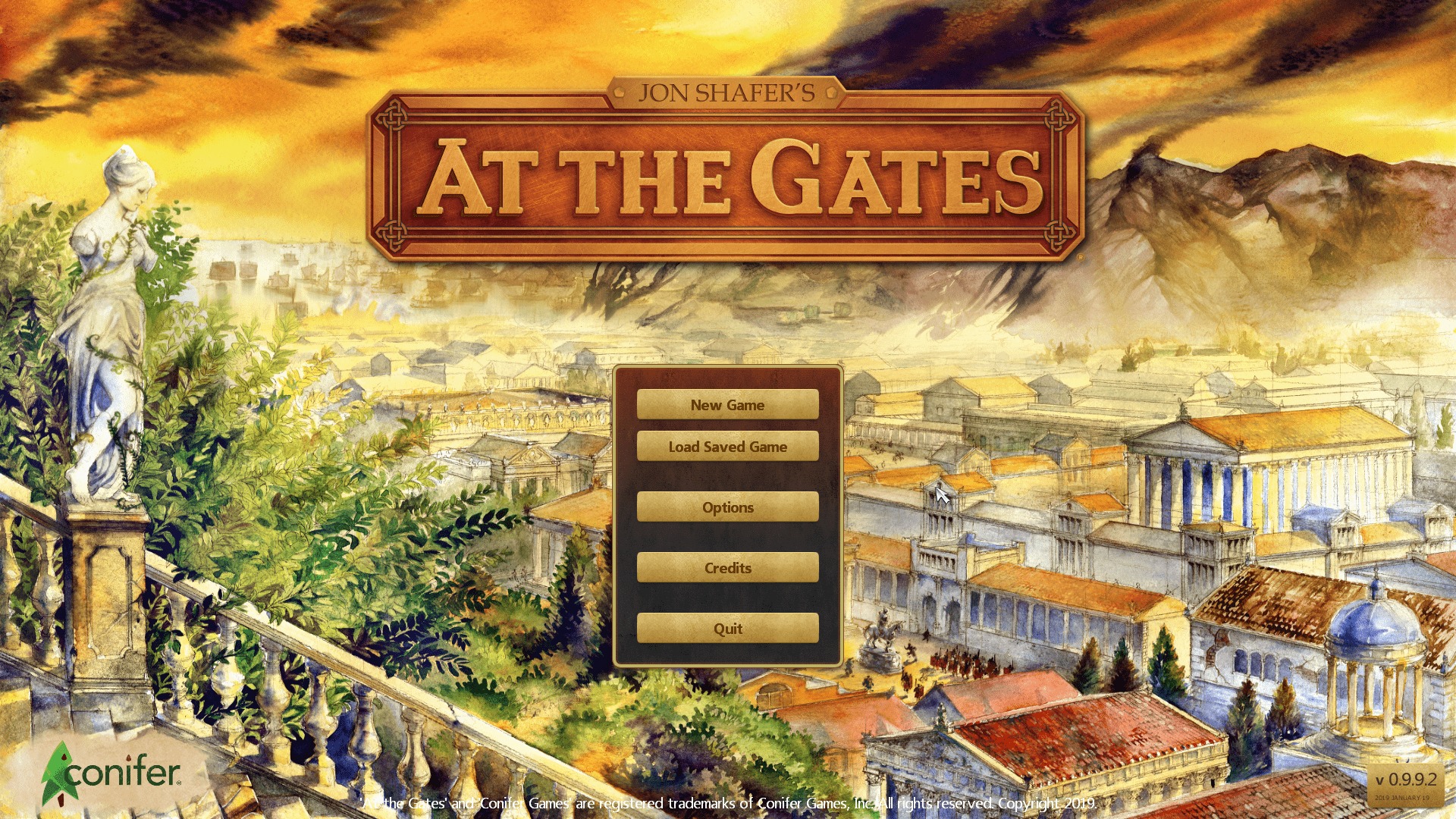 At The Gates on PC

At The Gates is the debut indie strategy title from Jon Schafer and his studio Conifer Games, and it wears its inspiration on its sleeve. Schafer is probably best known for his role as lead designer on Civilization V, and At The Gates plays like a much nerdier, hardcore version of that legendary strategy series.

And to be clear, when I say nerdier, I mean it in the best possible sense of the word. It’s the kind of game that will cause the true strategy fan to lose sleep for weeks on end, but like, in a good way.

At The Gates is a 4x strategy game which, for the uninitiated, means it’s a game in which you lead your people to explore, expand, exploit, and exterminate. It also includes some rogue-like elements (more on that soon) and a random map generator, which, if you are anything like me. means you are going to spend a lot of time starting new games over in order to receive an optimal setup.

You play as the leader of a barbarian tribe in the Dark Ages, struggling to survive on the fringes of society. Your ultimate goal is to supplant one of the two Roman factions which are present in each game, which is how you claim a military victory. The other option is to have yourself declared Magister Millitum, which is kind of like a combination of culture and economic victories.

But doing either of these things is much easier said than done. Depending on which barbarian culture you choose to play as, you will receive certain advantages, like bonus resources or additional starting units. To unlock a new faction like the Franks or the Saxons you will either need to occupy their home city, or to form a military alliance with them.

This choice of culture can give you an advantage, but it’s the addition of rogue-like elements that give At The Gates such incredible replay value. As the Goths, the only culture available to play as initially, you start with some bonus resources, a nomadic settlement and three randomly generated clans.

The clans are probably the most crucial element of the game, as virtually every facet of the game revolves around them. A clan is essentially a unit that can be molded to fit virtually any need your fledgling society may have, although it may be more suited to one task than another.

Each clan is assigned two traits randomly, that can be either positive or negative. A clan that has the Green Thumb trait receives a bonus to agriculture and is better suited to farm work. A clan that is Craven is unable to initiate combat, making it a bad candidate for military action.

This trait system is vast and involved and forces the player to adapt and adjust to the cards they are dealt. A high-level tech tree item will allow the player to alter their clan’s traits, but this will take a long time to unlock.

Each map is based on hexagons, much like the newer Civilization games. The variety of randomly generated terrain features impressed me with their consistent logic: rivers will feed down from mountains in the direction of the ocean, and at the mouth of the river is generally where a swamp will form.

You will spend the majority of your time agonizing over what to specialize your different clans in, which is essentially choosing their class. Unfortunately, this is all done through At The Gates’ rather basic menu-based UI, which could definitely do with some refinement.

Each turn, your clans consume food, so finding a steady supply of it will be your first priority. This is done initially through specializing some of your clans to be gatherers or reapers, who can pick berries or harvest wheat or barley respectively.

Of course, this is unsustainable, as gathering in this fashion depletes the tile. Upon realizing this I began to see how incredibly complex, and convoluted, At The Gates’ labyrinthine economy and tech trees truly are.

For example, to harvest food from a wheat tile without depleting it, you need to construct a Wheat Plantation. To do this, you need to train a clan as Diggers, who can identify mineral resources on the map. Once they locate a source of stone, they can begin to mine it (slowly depleting it, of course).

Once you have some stone, you need to train a clan to become Block Cutters, which is a third level crafting tech that will need to be researched first. Once accomplished, your Block Cutters will convert two stones a turn into cut stone, 20 of which are required to build the Wheat Plantation.

Now you just need to train a clan to be Farmers (second level agricultural tech, must be researched first) to work it, and you have a sustainable food source. This kind of complexity is something I crave in my strategy games but it was daunting even to me. I would say it took at least 10 hours of gameplay before I wrapped my head around basic systems.

The art style is simple but charming, with each of the dozens of jobs your clans can be trained into having a unique look and accompanying animation. The music is simplistic too, but adds to the atmosphere and remains unobtrusive.

The game’s combat has about as much complexity as the Civ games, which is to say it never feels like the real focus. You are here to build an empire, and while soldiers are required to defend it, managing the number of units required for an invasion would require a painful amount of micromanagement.

At The Gates is a brutally hardcore strategy game that will keep fans engaged for dozens, if not hundreds of hours. The amount of time it takes to learn even the basics, coupled with its simplistic art style and obtuse menu-based UI, will scare off newcomers. But veterans of the genre and fans of games of this pedigree will find an engaging strategy title that stands shoulder to shoulder with the games that inspired it.