Kingdom Hearts Re:coded originally released in Japan as an episodic mobile game, but it was eventually compiled into one title and was released for the Nintendo DS in 2011.

Taking place after the events of Kingdom Hearts 2, Jiminy Cricket’s journal ends up being infected with bugs, leaving Sora and the gang to revisit the worlds from the original Kingdom Hearts game in order to recover two hidden messages.

Though taking place after the events of Kingdom Hearts 2, Re:coded didn’t do much for the plot of the series besides the ending setting the scene for what would be Dream Drop Distance.

Although the story sort of sucked, the different gameplay mechanics featured in Re:coded turned out to be quite fun and a change of pace for the franchise.

It still didn’t go over well with critics, as Re:coded sits at a score of 66 on Metacritic.

Chain of Memories throws Sora, Donald, and Goofy into Castle Oblivion, where with each floor they traverse, their memories slowly begin to fade.

Sora meets the members of Organization XIII face to face and even defeats a handful of them in battle, leaving them killed (for the time being), and faces off with Marluxia at the end.

We’ll talk more on the original title down below, but let’s just say that Chain of Memories would have been just fine if it kept that isometric camera angle and 2D battles.

Re:Chain of Memories sits at an aggregated score of 68 on Metacritic.

Kingdom Hearts 358/2 Days is probably the most confusing title in the Kingdom Hearts series, right next to Kingdom Hearts 0.2: Birth by Sleep – A Fragmentary Passage, but this DS game puts the spotlight on Organization XIII, specifically Sora’s nobody, Roxas.

You get to experience Roxas’ entire “employment” with the Organization, and this game does a fantastic job at introducing you to each member of the hooded crew and fleshing out their unique personalities.

The story gives you a behind-the-scenes look at what happened with Sora during Chain of Memories and what the exact point behind the development of Castle Oblivion is.

Roxas is sent out on missions to recover hearts for Organization XIII and becomes close friends with two other team members, Axel and Xion.

There weren’t any new worlds to explore in 358/2 Days, but the game was the first in the series to incorporate local multiplayer, allowing you to team up with up to three other friends and complete missions as the Organization members. You can even unlock other playable characters such as Mickey, Sora, Riku, Donald, and Goofy.

Taking place right after the events of Re:coded, Dream Drop Distance stars Riku and Sora, who must partake in the Mark of Mastery exam in order to prepare for their fated fight with Master Xehanort in Kingdom Hearts 3.

Most of the worlds in Dream Drop Distance are brand-new and you get to see the plot play out from the two different perspectives of both Sora and Riku.

Dream Drop Distance introduced us to a new movement system called Flowmotion which allowed our heroes to bounce off of walls, swing around poles, and grind on rails; you can get around the worlds really quickly but also use these traversal moves to attack enemies.

Kingdom Hearts: Dream Drop Distance on the Nintendo 3DS sits at a score of 75.

Chain of Memories was meant to serve as a bridge between Kingdom Hearts and Kingdom Hearts 2, a way to explain how Sora lost all of his powers at the start of KH2.

You see, during Sora’s advancement through Castle Oblivion, he winds up losing all of his memories the further up he goes. Organization XIII is taking his abilities and memories away thanks to the help of a witch named Namine.

The game plays like a mix of an RPG and a 2D card-battler. You can collect hundreds of cards that allow you to perform attacks and spells during battle, and it’s all based on your deck-building skills. You can’t just whack the attack button to defeat enemies, you really have to think about your plan of action and act accordingly.

Cards numbered with 0 can break any card, but any other card can also break 0’s. There’s a whole system to it and it proved to be one of the most fun spin-offs in the series.

Chain of Memories on the GBA fared better than its 3D remake on the PS2 with a score of 76 on Metacritic. 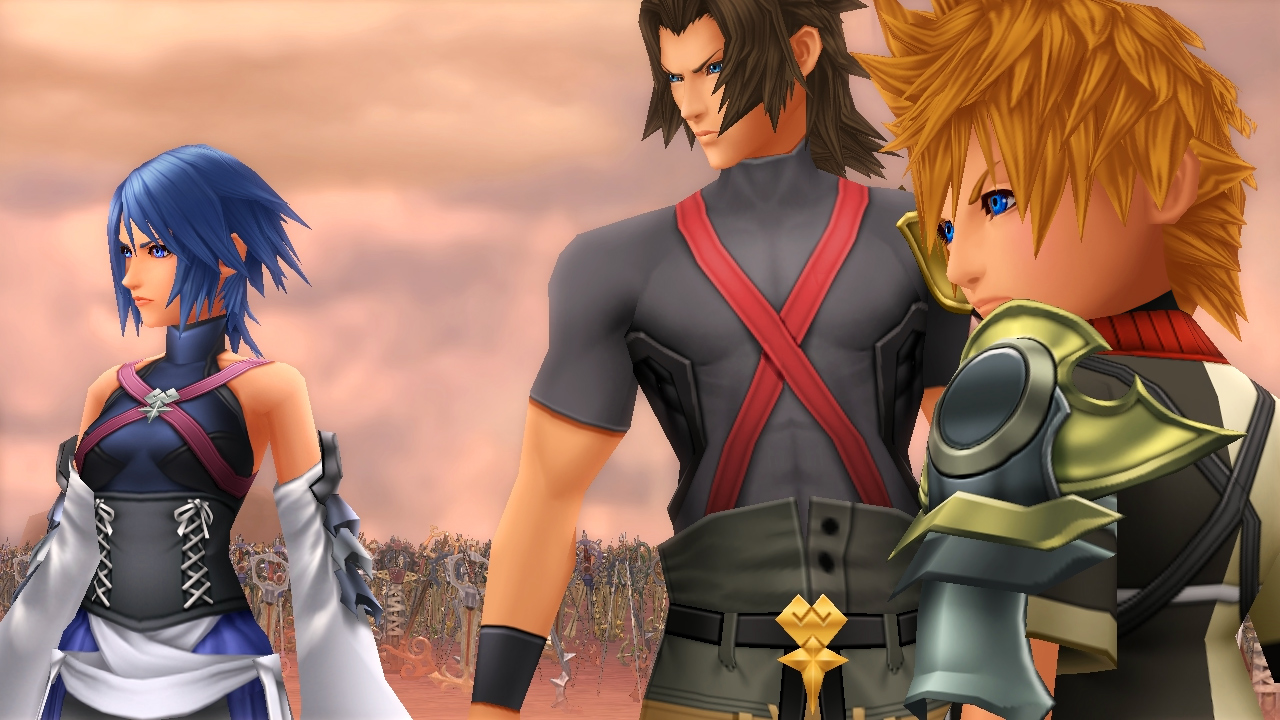 Set as a prequel that takes place ten years before Kingdom Hearts 1, Birth by Sleep introduces us to three Key Blade wielders of the past: Terra, Ventus, and Aqua.

The three of them are training under Master Eraqus when, out of nowhere, a man named Xehanort comes and messes things up and persuades Terra to give in to the darkness within him.

Birth by Sleep plays in three different campaigns that give you control over all three protagonists in a chase sequence of sorts. Ventus ends up following Terra through the Disney worlds as Aqua attempts to bring Ventus back, while also keeping an eye on Terra’s actions.

One of the negative things in Birth by Sleep is that you venture through each world once with all three characters, not leaving a lot of room for variety. You do go through different scenarios and locations with Terra, Aqua, and Ven, which makes the overall adventure a bit more varied.

Birth by Sleep is now one of the most important games in the series due to it showing how Aqua came to be lost in the darkness, and shows us who Vanitas is, as well as Xehanort.

Birth by Sleep sits at a score of 82 on Metacritic.

Who could forget the first release of Kingdom Hearts back in 2002? The idea of mashing up Disney and Final Fantasy was absurd, but looking back on it now, almost 20 years later, and we can obviously see that it worked out very well for Square Enix. Very, very well.

Sora gets chosen to become a key blade wielder and meets his, now, two best friends, Donald and Goofy, who need Sora’s help to save the princesses of heart, a mission given out by King Mickey himself.

Going through iconic Disney movies like Tarzan, The Little Mermaid, and The Nightmare Before Christmas, Kingdom Hearts was the best recipe for success, and while the gameplay was a bit clunky at times, it was still an exceptional RPG that really pushed the boundaries.

According to Metacritic and myself, Kingdom Hearts 2 is the best game in the series. Even though the game had a strange two-hour long opening that put you in control of Roxas, a character we’ve yet to meet since to KH2, the rest of the adventure with Sora proved to be one of the most exciting and charming yet.

KH2 introduced to us to many new Disney worlds such as the Pridelands, Pirates of the Carribean, Tron, Timeless River, Land of Dragons (Mulan), Beast’s Castle, and Twilight Town, just to name a few. Each world was sprawling, with clever references and fun enemy/boss encounters that would make any Disney fan swoon.

With the abundance of Final Fantasy characters, battles with Organization XIII, and an unforgettable final act, KH2 is where the franchise truly peaked. We don’t know quite yet if the upcoming Kingdom Hearts 3 will top it, but we can only hope so.

We didn’t think that Square Enix would be able to pull it off after many years of hype and anticipation but boy, they did it and they did it very well.

Traveling through these brand new Disney worlds such as Toy Box, Kingdom of Corona, and San Fransokyo is proving to be some of the most fun we’ve had with the series and watching Sora’s adventure come to an end has got to be one of the most bitter-sweet things to play through.

We know that this isn’t the end of Kingdom Hearts, but this is the end of the Xehanort Saga, so all there is left to do is wait patiently for what comes next in this Final Fantasy/Disney crossover that was a pipe dream turned into a fantastic reality.