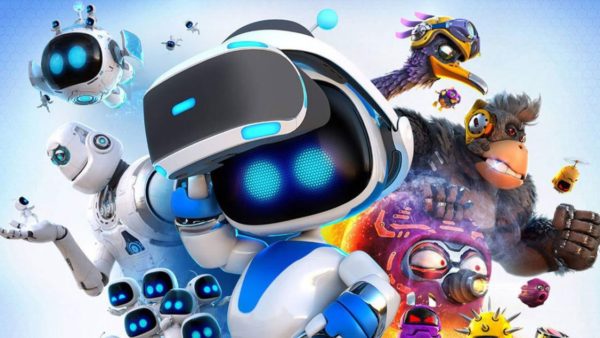 Virtual Reality is a constant reminder that we’re living in the future. This tech that we walk past on a shelf at Wal-Mart was once upon a time something that only existed in the dreams of 80s kids who had just seen Tron.

But even crazier than the reality of VR is how little attention it gets. Price is certainly a factor here, but another big drain on hype for VR is the lack of full experiences. Many VR titles end up feeling like over-priced tech demos. Sure, they are impressive, but also somewhat hollow.

Sony’s recent release, Astro Bot Rescue Mission, shows that VR doesn’t have to be this way.

Astro Bot is a 3D platformer in the style of the Super Mario games, with the twist of being inside the world and seeing the environment from all sides. You control your character from the third person and must use different VR-centered mechanics, such as depth, head-bashing, and motion controls to navigate the world, find collectibles, and beat bosses.

What makes Astro Bot great is that it’s familiar and accessible but also highly unique. The game unabashedly borrows from the best of the genre. When you jump into Astro Bot, you’ll immediately recognize PlayStation versions of Thwomps, Bullet Bills, and many other direct comparisons with Mario.

However, this is far from a bad thing. Instead of trying to shake up the entire 3D platformer genre, the developers use your familiarity with this style of game to create surprises using VR. Collectibles, treasures, and even sometimes the main path of a level require you to look all around you, even under your chair.

Astro Bot thrives on making simple things feel incredible. Just the act of going underwater or being raised into the air feels thrilling because the headset makes you feel like you’re actually being submerged or lifted. Also, if you think bosses you’ve fought in games before were big, just wait until you’re staring up at them in a virtual space. It’s wild.

And the most remarkable thing about Astro Bot is that it’s a full package. This is easily a 6-7 hour game, filled with a wide variety of levels that feature everything from jungles to haunted houses to beaches and much more that I won’t spoil.

One of the biggest problems with many VR games is that they rarely feel complete. While fun, games like Batman: Arkham VR, PlayStation VR Worlds, and Until Dawn: Rush of Blood lack more than a few basic concepts. Even games like Resident Evil 7 or Skyrim VR are fun, but since they aren’t made only for VR, they don’t use the tech to its full potential.

With Astro Bot, Sony made a game that is designed to be played over multiple sittings with growing selections of abilities that are used in increasingly complex and interesting ways as the game progresses. An ability you receive in hour two will return for a different use in hour five. The game feels like a final, well-designed package.

While I could previously recommend Until Dawn: Rush of Blood to on-rails shooter fans or Batman: Arkham VR to Batman fans, it has always been hard to say they are worth the cost. With Astro Bot, it’s safe to say that at $40, this is a worthy purchase for 3D platformer fans.

What is less safe to say is the value of a VR headset in general. While games like Astro Bot, Moss, Tetris Effect, and Beat Saber are hinting at VR hitting its stride, the price point is still a tough hurdle. Especially when the space is still primarily occupied by tech demos and messy VR modes added into existing games.

While the VR landscape might not be at a place where the average consumer will jump in, its clearly improving. We have to remember that we are still in the early years of VR gaming, and developers have a long way to go until they truly know what is possible. As this section of gaming grows, it seems likely that we will look back on Astro Bot as a crucial milestone.

VR is in the best place its ever been as far as game quality, and if you’re comfortable with being an early adopter, now is a fine time to join. But, even if you don’t jump into VR right away, Astro Bot proves that this tech can be used for something bigger and better, and that VR gaming is not something to be ignored.

Astro Bot Rescue Mission is currently available for the PlayStation VR and is also nominated for Best VR/AR Game at the 2018 Game Awards.