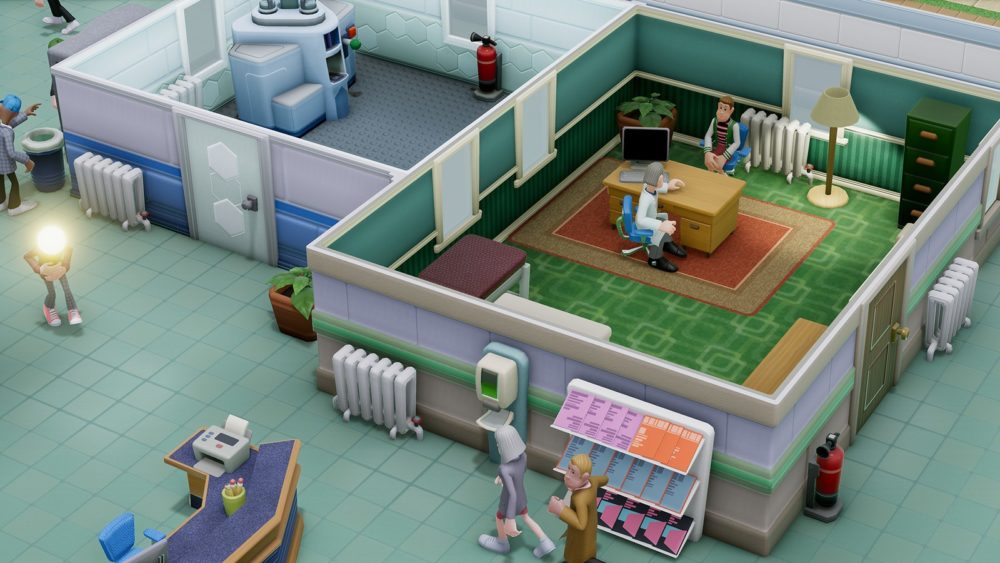 “A psychiatric condition that causes the sufferer to perceive things that don’t exist, usually boxes within which they are trapped. Some scientists speculated that the box may both exist and not exist, leading to the well-known thought experiment, Schrodinger’s Mime.”

That is the brief description Two Point Hospital provides about one of the many ailments its patients will present themselves with. It’s Mime Crisis, a troubling condition that had my hospital teeming with amusingly animated members of the public donned in their finest Mime attire. Two Point Hospital captures all of the tongue-in-cheek humor and accessible yet deep gameplay that its (kinda) predecessor, Theme Hospital had, and though it might have a few niggling issues, it’s exactly what I’d been hoping it would be.

For those unfamiliar with Theme Hospital or its spiritual successor in Two Point Hospital, their premise is simple. Build a hospital, hire the staff, treat patients, improve to tackle trickier ailments and scenarios, and make it the most successful hospital it possibly can.

Two Point Hospital sees you put in charge of a healthcare organization, and it’s down to you to take control of each of the hospitals in Two Point County, and get it up to snuff. Each one brings with it new illnesses that need to be treated, factors related to your hospital’s rating that you’ll need to take into account when building, and plenty more. For example, Tumble hospital introduced the Fracture clinic as a new room that could be built to treat more illnesses, but also had the added wrinkle of being in a particularly cold area. The game informed me I’d need to place radiators to keep patients warm and to prevent them from freezing to death. A seemingly minor additional thing to think about, but something you need to factor into your hospital design, and to keep on top of as you expand.

It’s this way in which Two Point Hospital continues to slowly but surely add layers of complexity to its initially simple ‘build, cure, improve’ premise, that makes it not only accessible for newcomers, but provides the depth to keep experienced players hooked. The first couple of hospitals you’re put in charge of seem simple enough, but once you get five or six in, that’s when things start to get more interesting, and enjoyably frantic.

You can’t just see your hospital as some sort of bland conveyor belt for diagnosing and treating patients, though. You’ll need seating for waiting patients, snack and drinks machines to keep your patients and staff fueled, a staff room to give them a break from time-to-time, bins, radiators, decoration to make it more appealing, and plenty more. Diagnosis and treatment machines can be upgraded to increase success rates and their efficiency. Staff happiness can be affected by salaries, promotions, and the prestige of the room they’re working in – determined by its size, and what furniture you’ve put in it. Finding that you’re unable to treat some patients or have enormous queues? Well, you’ll want to look at training your staff up or hiring more competent replacements.This was, however, where some of my niggling issues with Two Point Hospital began to arise.

The game doesn’t make it entirely clear how you’re supposed to resolve some of the issues that may arise in usual gameplay. For example, I constantly had long queues outside my GP’s office, inhabited by my finest, five-star doctor. Alas, he constantly had an enormous queue outside his door. The game suggested I build additional GP’s offices, so I did exactly that. And yet, this just resulted in all of them having queues twice the size of the original.

Other times, patients would storm out – or as the game lovingly calls it, rage quitting – due to being very hungry and very thirsty. Yet, almost every last one of my hospital walls had drinks machines, snack machines – and all the variants I could purchase with the unlockables currency, Kudosh – plastered along them. There was no indication that these weren’t working or that they didn’t have access to them, I just had to accept it. Considering these seemingly minor issues all play into the happiness of patients and your staff, which can be required objectives in order to successfully three-star a particular hospital, these instances of additional depth tempted me to just move on, rather than perfect the hospital for that three-star rating.

There’s also something a little demoralizing about starting from absolutely nothing in most of the hospitals you’ll take charge of. Due to the sheer number of GP offices, chemists, and other rooms that you’ll be building, having the option to save a room template and reuse it in any and all of the hospitals in the game would have certainly alleviated this issue. It’s not a complete deal-breaker, but just be prepared to have the blueprints of your preferred room layouts to be forever etched into your mind, you’ll recreate them enough.

Even with these slight blemishes to the overall experience, Two Point Hospital frequently left me chuckling away. Its PA announcements, radio, visual style, and animations are so full of charm that you’ll watch a patient’s lightbulb head be removed and replaced with a regular one, and forget all about the fact that two patients stormed out because they were too inept to use a vending machine.

With each location I conquered in Two Point Hospital, it dangled another tantalizing carrot just ahead of me. All I needed to do was deal with natural disasters, hazards, and all manner of other insane illnesses to prove myself and attain them once again. And when you want to stick around in a hospital, you’re free to do so and revel in all of your achievements, take on additional challenges from your staff or external bodies, or even take on timed online challenges and compete against other players. You can even compare the treatment and diagnosis rates, mortality rates, and plenty more of your hospital against those of your Steam friends’ hospitals thanks to online leaderboards, making sticking around actually feel worthwhile.

Two Point Hospital is everything that Theme Hospital fans would have been hoping for from a successor, and then some. It may still have some finicky issues, which hopefully, can be addressed with a post-launch update, but all of its charm and witty humor make managing hospitals far more entertaining than it really should be.