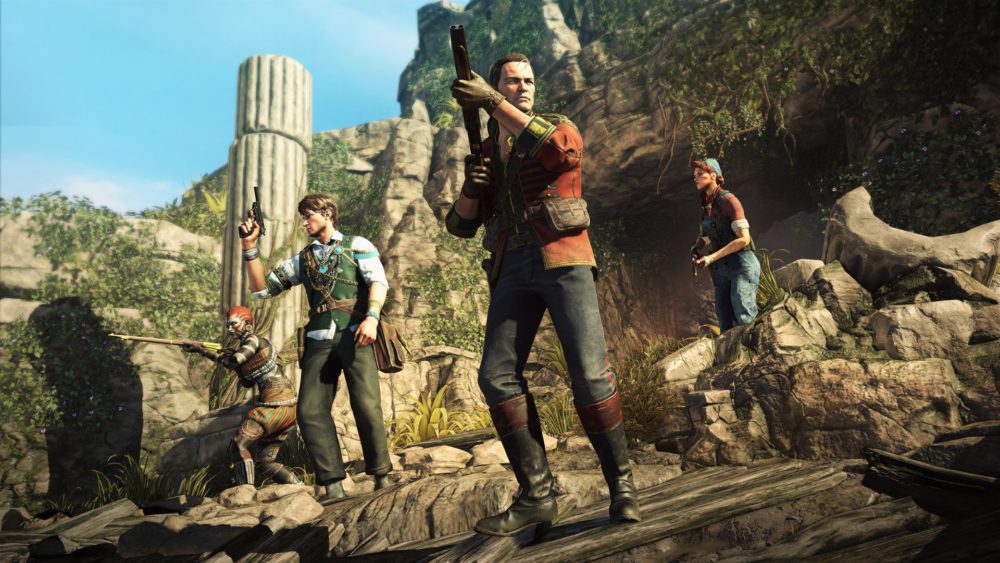 Much like the Sniper Elite games that have dominated Rebellion’s catalogue over the past five years, Strange Brigade is quite a straightforward third-person shooter. While its Left 4 Dead style co-op structure and puzzle infused shooting add little to the tried and tested genre, Strange Brigade’s design adds a palpable sense of fun that makes it an enjoyable distraction, much like the brutal slow-motion kills did in the Sniper Elite games.

You’d be forgiven for thinking that Strange Brigade was an Uncharted spin-off after a quick glance. Set in the valleys and caves surrounding Egypt’s famous pyramids, the titular Strange Brigade sets out to stop the mystical figure of Seteki from destroying the area with her undead army. The areas you explore are made up of ancient structures engulfed in overgrown vines, booby trapped caves, and countless broken rope bridges. The world has a clear Drake’s Fortune vibe, but it feels more like playing a video game adaptation of something like Brendan Fraser’s The Mummy series or Nicholas Cage’s National Treasure. As your characters explore deeper into Seteki’s land, the paths get complicated and the supernatural threats get increasingly more menacing.

While Strange Brigade’s nine levels don’t vary much in setting, they’re well designed and often beautiful. Whether it be open courtyards overlooked by a pyramid or a passageway down to an ancient crypt, there’s always something to look out for. Collectibles are everywhere and getting them varies in difficulty. There are secondary pathways in almost every area, most of which lead to treasure that can help you unlock new weapons or other areas, and they add a feeling of scale to the world while persuading you to explore. It’s not always clear which path continues the level and which leads to a puzzle room, and that makes it feel like it’s less linear than it actually is. Many of the collectibles don’t really have a use, but you’re still compelled to explore to find them all and test yourself with the puzzles.

While the design of the individual areas is great, the overall structure of each level is a bit predictable. The enemy difficulty progresses in the same way, seeing you face bosses at the same point in every level, and the larger combat areas are too signposted. You’ll walk through an archway and spot the familiar traps and doors that signify an upcoming larger fight. The enemy variety is great, with you needing to employ different tactics for many of them, but you always know what you’re going to be faced with next.

However, Strange Brigade’s third-person shooting is solid enough that the horde type moments stay fun through the predictability. It’s far from excellent, feeling too rigid and inaccurate at times, but popping off the heads of zombies and skeletons with your early 20th century rifle is satisfying. Backing off while unloading a few clips into a horde of enemies, World War Z style, feels good, but the issues become more obvious when it gets tougher. You can only shoot while aiming, which makes taking out the quicker enemies frustrating when you’re up close, and the not so responsive dodge roll makes getting away from crowds difficult. The enemy spawning can also be a problem. Occasionally, when you’re backing towards a corner, an enemy will spawn right behind you, and since they’re basically silent, you’ll suddenly be surrounded.

The other time that shooting is an issue is during the boss fights in the second half of the game. Defeating them often requires you to shoot small weak points as they leap towards you and send minons to attack you from all angles, but the rigidity of the gunplay makes hitting them frustrating. Also, since some of the pick-up and interact animations are slow, some options simply cannot be used without interruption. It’s certainly flawed, but combining powerful weapons, triggering traps, and decimating groups of zombies with dynamite is admittedly a lot of fun.

Puzzles are Strange Brigade’s other focus. They’re rarely complex or challenging after you’ve got the hang of the idea, but they’re a nice change of pace from the action heavy sections. You’ll have to search the surrounding area for solutions, shoot targets in the right order, and complete memory tests. The gameplay variety and adventure movie tone they add, however, make them welcome in every level.

Working your way through the levels is supposed to be a co-op experience. Four players can take on levels together, each taking being a member of The Strange Brigade, but I found it equally, if not more playable alone. Tactical co-ordination isn’t a huge requirement, but playing with strangers online felt like disorganized chaos. Some players won’t be interested in searching for collectibles, and those that are, are left to fight for them.

Also, some areas can only be accessed when all four players interact with an object at once, and if someone’s wandering around, the others are left waiting. That’s fixed somewhat when playing with friends, where you can talk about how you want to approach each level and hurry each other along, but playing alone and at my own pace gave more meaning to the level design and made the overall experience feel more coherent. Playing with others is a benefit in the tougher combat sections, though, as one Strange Brigade member can act as a distraction while the rest lay down the damage. It’s rarely difficult enough for that to be a problem, however, with me being able to finish the 75 minute long first round of horde mode alone without many issues.

Arguably Strange Brigade’s main strength, and the thing that elevates it above the generic quality of its gameplay, is its B-movie charm. The base plot line is generic and forgettable, but the way it’s presented is excellent. Each level is introduced by a black and white vignette of the Brigade being introduced to their mission, littered with trope-y quips from the very, very British characters, and that style continues throughout the journeys. Each new enemy type is introduced by cinematic title-card sequence and new areas are given dramatic names that pop up onto the screen.

However, it’s the game’s narrator that stands out. He’s as over-the-top as you could imagine – straight out of a 1950s adventure movie. His repertoire is little more than never ending alliteration and rolling Rs, but it feels like he’s always watching, being a part of your journey. He comments on your zombie killing exploits, talks about his hatred for cats, and even asks you to make him a cuppa when you pause the game. He’s funny, charming, and never overstays his welcome. When you’re playing alone, he feels more like your partner than any of the other Strange Brigade members do in co-op.

Strange Brigade’s serviceable but flawed gameplay and forgettable story make for an incredibly generic third-person shooter, but its charming personality, great level design, and well integrated puzzles make for a B-movie romp that’s a lot more fun than you might initially expect, even if you plan to play alone.