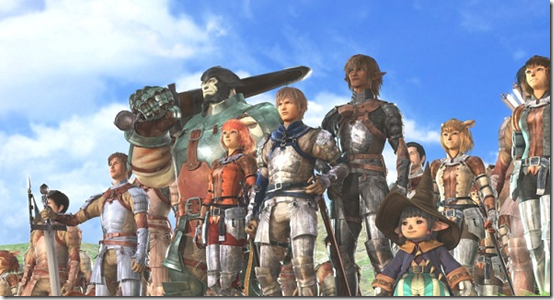 “If and when, maybe even ten years in the future, Final Fantasy XI finally ends, then yes, we’d be completely open to doing some kind of promotion for those players. Maybe if they move to XIV we could give them a free year of subscription or something like that.

With that being said, we don’t want to force those players to move on to XIV. They’re completely different games, so it has to be their decision.

The memories players have of Vana’diel are memories of Vana’diel. And it’s because it’s Vana’diel that those memories are so strong. We’ll do everything in our power to keep the servers open for the players. It’s important for us.”

As a longtime player of Final Fantasy XI, and active subscriber of both it and Final Fantasy XIV, it’s refreshing to read these comments from Yoshida. It’s clear that he gets the current state of both of those games, and selfishly, it’s good to hear that I don’t need to worry about FFXI shutting down anytime soon. He mentions in the full response that there are patches on the way, and if you’ve been following FFXI, you know that the game has consistently received plenty of updates and even new content over the last few years.

Final Fantasy XI has stayed alive for this long, despite the existence of Final Fantasy XIV, because they are so distinct from one another, FFXIV isn’t able to cannibalize FFXI’s player base.

When Final Fantasy XIV and eventually its relaunched edition, A Realm Reborn, released there were mass migrations of players that wanted to just play the latest, and most supported Square Enix MMORPG. Years later though as of 2018, both populations seem stable and separate. While Final Fantasy XI still probably attracts some new players interested in playing an old-school style MMORPG, most players are either returning, or never left, and it’s primarily because of the last thing that Yoshida mentioned in his answer: Vana’diel is full of memories.

There’s a connection that hardcore Final Fantasy XI players have with Vana’diel that has not been easily replicated in other MMORPGs, especially modern ones. FFXI in its early years – and even still today to a lesser extent – was harsh, unforgiving, and incredibly reliant on group play.

If you didn’t have a Linkshell (AKA: clan), or weren’t willing to work hard to put groups together to accomplish things in-game, you were pretty much out of luck. If you stuck with it for years though, you very likely made lifelong friendships. It was almost unavoidable. Even though almost all of them don’t play FFXI anymore, I still keep in touch with a lot of my old Linkshell buddies.

Also, because Final Fantasy XI was such a struggle at times, every little victory you had whether it was completing a mission, unlocking a new area, or defeating a difficult boss with your friends, felt like such a meaningful accomplishment, and the memory is seared into your brain.

Some moments for me that FFXI players reading this will surely appreciate are reaching Ru’Aun Gardens and Lufaise Meadows for the first time, obtaining the extremely rare Defending Ring, and fighting over Fafnir/Nidhogg spawns.

The most perfect way I’ve heard Final Fantasy XI described is that “it’s the best experience I never want to have again.” A lot of those hardships, like staying up all night to stare at an empty room waiting for a monster to appear, or waiting hours for a group invite, were objectively not fun, but still, hardcore FFXI fans wouldn’t trade back any of those memories.

Contrast this to Final Fantasy XIV. Again, I play both, but for totally different reasons. FFXIV is way more respectful of my free time, is filled with action-packed fights, and almost all of the content can be done either solo, or with a group. Awesome considering I’m an adult now with far less free time. But at the same time, I have almost no emotional attachment to the game’s world, Eorzea.

It’s not that the narrative supporting it isn’t well done; in fact, Final Fantasy XIV’s story content is excellent. It’s just that I never had to live there.

Almost all of the areas in Final Fantasy XIV are just scenery for the most part. They are stops that you have to make occasionally along the way to finish your next fetch quest, story mission, or instanced activity.

Outside of extreme difficulty raid activities, and the very Final Fantasy XI-like Eureka content added in Stormblood – both of which, by the way, be very easily skipped by most players without much penalty – it’s rare that you ever need to group up, or even communicate with another player unless you’re going out of your way to do so. The gear you get is all temporary until the next patch adds something better. In FFXI, that Defending Ring that I got is still useful, and on my character’s finger after over a decade.

All of this isn’t to say that one game is better than the other, it’s just that they are wholly different experiences. Clearly, enough people still enjoy Final Fantasy XI’s style after all these years as Yoshida’s comments suggest, going as far as to suggest “10 years” as a potential lifespan for the now 16+ year old MMORPG.

It’s a comment that probably sounds crazy to the casual observer that thought the game was dead once the PS2 and Xbox 360 support dropped. If you know both games as well as me, and others like myself do, it’s not as wild as you would think.