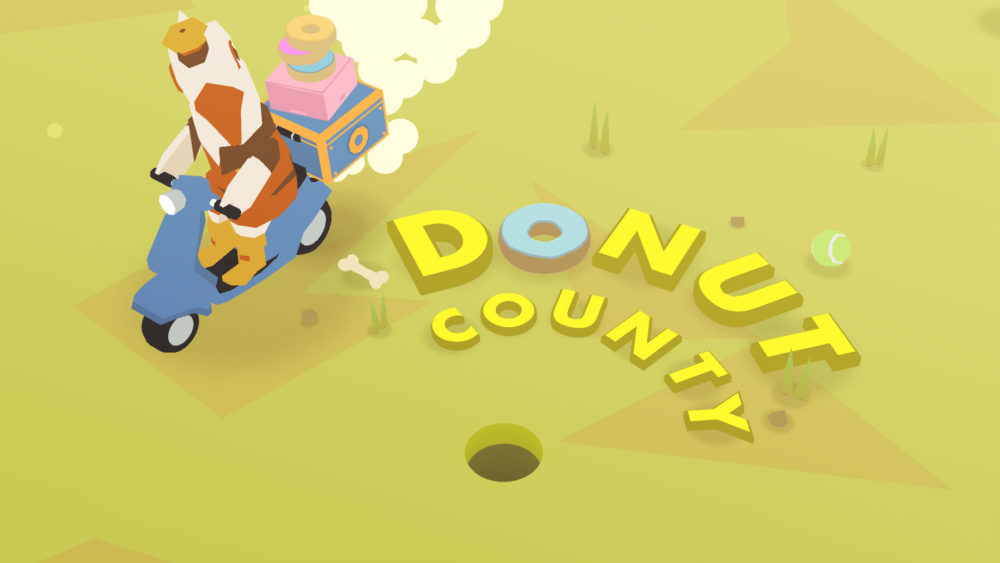 Out of all of the many whimsical and fantastical creatures and characters you could create in a video game, developer Ben Esposito did a complete 180 and made a playable hole in Donut County. Instead of managing a cast of crazy characters, players are tasked with moving around from area to area, swallowing everything as an ever-expanding chasm. What might sound like a tedious and even boring experience is instead handled in such a way that it makes for an interesting and puzzling adventure.

Donut County centers around a raccoon named BK who works as a donut delivery guy. While his job should be sending out sweet treats, he ends up deploying these holes to his customers that end up causing a whole lot of trouble in the long run. Donut County plays out in a flashback sequence, with most of the town already ravaged by the donut destruction these holes have caused. BK’s joined by a cast of other quirky characters –all of which are his unwilling victims– who share their stories on how their homes or establishments were swallowed up by the ground.

The stragglers have formed some sort of underground camp, and most of the story comes from their witty exchanges. Donut County is packed with some hilarious dialogue, and while you might just be controlling a giant hole, the game more than makes up for it with its cast of quirky characters. Their quips and puns had me giggling from time to time, although I did find myself skipping some of their conversations to get straight into the action.

That said, Donut County is divided into different stages, each of which involves you controlling BK’s hole and doing his dirty work. You basically start with a small hole during each round, swallowing up little bits of rocks, bricks, or anything small enough to fit inside the chasm. As you continue to devour everything in sight, your hole will continue to grow, letting you munch on some of the bigger things in the area. Your main mission in most stages is to pretty much grow large enough and eat everything in sight. It’s worth noting, however, that levels are self-contained, so you can’t go around eating the entire city in one sitting.

These stages start off pretty simplistic, requiring you to start off small by collecting whatever’s on-screen until you become big enough to consume buildings. Thankfully, Donut County has a bit more to offer than simply eating objects, as the game injects different lighthearted puzzles as you progress through the stages. At one point, I needed to fill my hole with soup and feed it to a bird to progress through the stage. While it might have seemed straightforward, there were bugs I needed to avoid and a simple recipe I needed to follow. If ever the bugs contaminated the soup, I’d have to start the process all over again. That small segment became a cat and mouse chase in a small cooking space, mixing things up from the “eat everything” set up.

These levels in Donut County feel far more dynamic with the introduction of different switches, roadblocks, and other various items you can interact with. I enjoyed having to think outside the box, trying to figure out how a simple hole could cause more mayhem by using the environment to my advantage. These smart level designs are only bogged down by their overall quantity, and I wish Donut County was filled with more of these stages following my two-hour playthrough. There aren’t any bonus or challenge stages after finishing the game, but I did have the option to head back and do them again. Though, there’s only so many times you can replay the same levels.

Donut County offers a bite-sized adventure that’s crammed with some good ideas and funny exchanges. The adventure manages to expand as fast as your sinkhole, throwing in different concepts and mechanics to keep things fresh on your rambunctious city rampage; but for everything it brings to the table, it still left me wanting just a bit more.