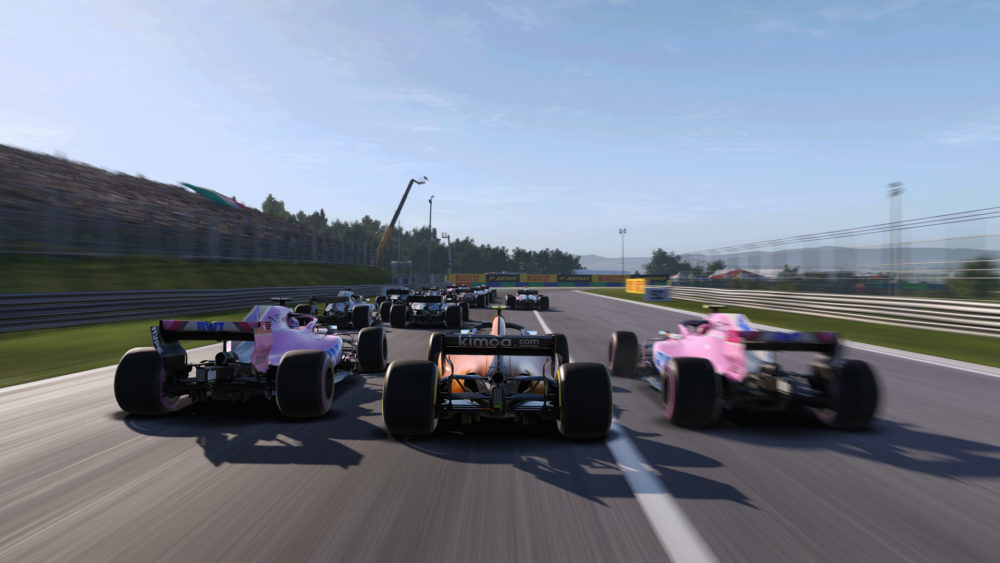 Formula One can be a tough sport to keep up with if you’re not someone who pays attention to each Practice session, Qualifying, and everything in between. Driver changes, new teams and tracks, and rule changes can have a huge impact on how a season plays out and Codemasters has been trying to realize that in an annual release since 2009. The first few years were a struggle, but since 2015’s disappointing entry, the series has been going from strength to strength, and F1 2018 is another big step forward.

Rather than adding new modes or something that drastically iterates on the F1 formula, Codemasters has instead doubled down on the series’ flagship career mode, adding extra depth and polish to create a game with everything a die-hard Formula One fan could be looking for. The level of depth in terms of systems is incredible, creating the realistic race feeling by giving you the same things to think about that a real-world driver would. The landscape is constantly changing, and you need to react quickly and precisely. Between races you’ll need to analyze the efficiency and wear of your car’s important parts, tweaking setting and angles to fit the track you’re heading to next, while giving you options to change should your strategy not pan out as you’d hoped. You can also tinker with wing angles, ERS deployment levels, and strategy as you drive, making the ability to react well one of the most important traits a driver can have. The sheer level of technical detail is astonishing, with anything an F1 fan could be looking for there to be found.

That element of management also extends beyond F1 2018’s racing itself, with your driver’s career being just as important to keep in mind as which tires you’re taking for the next race weekend. You can choose where you start, whether it be as an up and coming contender at the likes of Torro Rosso, or a ready-made challenger who supplants Vettel as the number one driver at Ferrari. From there, you can choose how you progress, with every action you make on the track affecting your status in the paddock. As you race, completing optional test objectives in Free Practice and meeting wider weekend goals, you earn points that can be spent on important R&D developments. Most of which can truly be felt on the car after they’re implemented. Choosing how you change your car is up to you, but rival teams will progress too, in whichever areas they see fit. It allows you to adapt your car to your driving style – letting you choose between changes that boost things like downforce and top speed. Choosing the right R&D path is vital to melding a car that fits you perfectly.

The management extends even further, however. With how you perform affecting how other teams perceive you, you’re given the opportunity to switch teams or negotiate a new contract with your current one in the middle of seasons, giving you different development options. Rule changes can also come in at certain points, making pending upgrades no longer legal, or giving you a head start on rivals due to a previous implementation of new parts. It adds an extra tactical element on top of the moment to moment racing, and it’s easy enough to navigate that you’ll want to get the best out of it.

The main new feature in career mode is media interactions. Between sessions, you answer questions that affect your attitude (Sportsmanship or Showmanship) and influence the morale of your four R&D teams. It’s great in theory, and the actual interactions aren’t as awkward as you might expect, but the questions and answers are often repetitive, and sometimes offer little variety in beneficial options. A question about scraping a wall in the last session doesn’t have an answer that’ll benefit you, and it’s easy to tell when answers will annoy certain departments. These media moments lack the balance and nuance to make you actually think about the answer you’re giving and how what you say will affect your team, instead, feeling too forced and signposted.

All that depth shouldn’t scare you, though. F1 2018 can be as accessible as you want it to be. Getting it right can be a process that takes a few races, but the difficulty options are plentiful. With default settings, the cars handle like a dream. They stick to the track like glue through corners, and the assists ensure that you trust the car, without taking away too much control. You can throw them into hairpins, knowing that you’ll come out the other side with the traction to power onto the next one. There are some inconsistencies when it comes to AI aggression and penalties for collisions, but driving feels as great as ever, for the most part. If you want a deeper experience, however, you can turn all the assists off, or pick and choose, so that you need to be more precise with your inputs. The most important and impressive feature, however, is the AI difficulty, which is controlled on a 100-point scale. You can tweak it as you like between weekends to give you just the right amount of challenge. If you want to skip through all of the FP sessions, be in pole position after one lap in qualifying, and win a five-lap race by tens of seconds, you can, and that also negates much of the need to think about the technical side of the sport. If you want the full experience, full of fuel management, tire degradation, and weather issues, you can have that too. Whatever experience you want to get from F1 2018, you can have it, and that makes it perfect for racing fans of any type, whether they’re deep into the F1 world or not.

The impressive levels of detail also extend to the visuals and sound. Engines rumble at the precise tone, tires squeal as you bounce over curbs, and the familiar voice of David Croft is there to introduce the sessions. All the sounds work together to create an immersive race-day atmosphere, and even the introduction media scene is complemented by the sound of the turnstiles at Melbourne, recorded directly from the track itself. The tracks and cars look as pristine as ever, but the weather and surroundings have seen a drastic improvement. Changing cloud formations signal the incoming threat of rain, while mist envelops the track at certain times of the day and heat haze adds to the realism of hurtling down a back straight at 200mph. It’s a stunning visual package that keeps improving each year.

Away from the Career mode, which is undoubtedly the core of F1 2018, you can take part in full race days as whichever driver you prefer, set time-trial records on tracks for your friends to beat, or race online in ranked or unranked lobbies to prove your worth. The ranking system has also been altered to incorporate a safe driving score, making it a fairer system. It may not be as deep as career mode, but playing online is as quick and seamless as you could hope.

Classic cars also return, headlined by the long-requested 2009 Brawn which took Jenson Button to the Drivers’ Championship. The classic cars all feel different, influenced by the regulations of their time, many of them nippier than their modern counterparts, so taking part in their events is a fun change of pace from the serious career mode, but the events themselves lack authenticity. Instead of taking part in themed events, you’re simply tasked with meeting a certain objective on a modern raceway as a kind of fun marketing opportunity. While it can be appreciated that redeveloping locations to fit time periods would be a lot of additional content, the cars being the only throwback makes driving them a little underwhelming.

Choosing to focus on improving the already excellent career mode for F1 2018, rather than adding something entirely new and shallow, was a great decision on Codemasters’ part. The new iteration offers Formula One fans a near perfect simulation of the sport, complete down to the last technical detail, but the assist settings and satisfying racing make it a viable racing option for even those with cursory F1 knowledge.