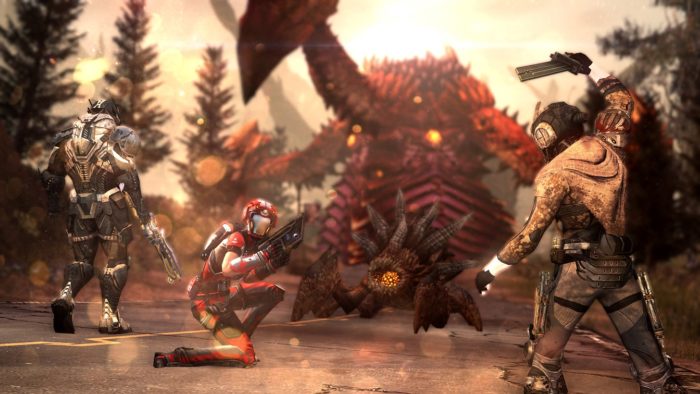 Apparently, Defiance was an MMO that got released alongside some SyFy television series a few years ago. I never watched that show, but when I heard about the existence of Defiance 2050 —a sci-fi MMO-style shooter with Borderlands’ looting elements— I was intrigued.

Defiance 2050 is a free-to-play reboot of the original game, and it comes with upgraded visuals, some extra content, and sweet controller support for those playing on consoles. As soon as you boot up the game, you’re given a few lines of dialogue about how aliens are invading Earth and you have to help push the enemy back as part of some space marine force. After that, you’re tossed into the game’s barebones character creator, where you get to select your race (human, or two other alien species), gender, and pick from a handful of hairstyles and colors. Then, it’s off to Earth with you.

At its core, Defiance 2050 is a looter-shooter. You’ll receive story-based missions as you progress, and then shoot aliens with a gun to gain experience and level up. Whenever you gain a level, you get to invest a few skill points into class-specific skills, depending on which class you picked at the start of the game. Every so often, you’ll pick up valuable guns that are stronger than what you already have. Because this is an MMO-style shared world shooter, you’ll also come across other players in the world. During my time with the game, I crossed paths with a handful of fellow players pursuing the same objectives as I was, and it was fun to hop on our space bikes for a bit, gunning down the same alien scum.

While exploring, you might also come across a world event called an Arkfall, which causes part of the map to turn red. If you head to the objective, you’ll get to team up with other players to take down a gigantic, monstrous alien threat together. Needless to say, this is a co-op event that’s way harder than the story missions you can do solo, but the rewards are usually worth it if you’re looking to gear up a bit more.

I should also mention that the game does feature microtransactions and loot boxes. However, the boxes themselves are purely cosmetic, and they’re optional, which means that they have no bearing on your gameplay whatsoever. Some of the cosmetics actually looked pretty decent as well, and they’re just there for players who want to make their character look a little more unique or distinct. On the other hand, the in-game shop also allows players to buy keys, which can be used to open chests for bonus loot. Keys can also be obtained by playing the game normally, but there is a slight pay-to-win aspect here for players who just want to shell out some extra money to get quick gear.

On paper, Defiance 2050 sounds like a hit. Big world, free-to-play, optional loot boxes, and an endless grinding loop for better gear? This game should have all the makings of a winner, but instead, it feels bland and flat. And that’s because of the lack of polish and remarkably outdated graphics that make this game feel so lackluster.

Everything in Defiance 2050 just looks awfully dull, and despite the slightly upgrade visuals here, the art style and direction implemented in the game hasn’t done it any favors. Character and enemy models look incredibly dated, and it certainly doesn’t help that their animations look so stilted and floaty. The gunplay feels weightless, which makes for very unsatisfying shooting. The enemy encounters are bland, with aliens rushing towards you like stunted clay dolls with no real purpose. Some of the humanoid enemies will try to take cover when shooting, but most of the aliens pretty much just run straight for the player character in a predictable fashion. There’s just no thrill in taking down these aliens. You could say the same about games like Destiny, but at least the guns themselves were unique, and the shooting and moment-to-moment gameplay were actually enjoyable.

Defiance 2050’s poor technical performance also does it no favors. As I progressed through the game’s story, certain missions would bug out, preventing me from interacting with the necessary object or NPC to actually end the quest and get my reward. A quick reset of the game should fix this issue handily, but it happened frequently enough that I felt the need to mention it here.

Defiance 2050 isn’t so bad to the point of being unplayable. The glitches I ran into were annoying, sure, but instead of feeling frustrated at the game, I found myself feeling bored instead. This is in large due to the competition that Defiance is facing right now. Sure, it’s free-to-play, but so are games such as Warframe, which offers a similar premise and much more refined mechanics. And if you’re willing to pay a little more, you could play much better-looking and polished games like Destiny or The Division instead for that looter-shooter grind.

At the end of it all, Defiance 2050 is fun to muck around in for a couple of hours, but its lack of polish and outdated graphics severely hold it back from even getting close to the level of its current competition. You’re probably better off looking elsewhere.